Visitors and a meal at Alexanders

Before we moved house a couple of years ago, we had a few guests - mostly relatives, and close friends who didn't mind sharing one bathroom with us, and being very much en famille.

Now we have a separate guest flat, we have a lot more guests. I'm surprised how well it works. The flat is the ground floor of our house, but it has no access from the middle and top floors, where we live, other than via an outside staircase. So if we have guests we don't know very well (such as friends of friends) then they can do their own thing entirely and we barely see them. There's a good sized kitchen with basic equipment and a table that seats up to six; so if they want to eat in, they can cook for themselves easily.

If it's relatives or close friends who are staying, then we can spend most of the day with them, if that's what they want, but we still all have our own space: we never do breakfasts together (I like time to myself first thing each morning; Richard gets up fairly late and doesn't eat breakfast anyway) and if our guests want a siesta, or an early night, then the guest flat is theirs to pop back to any time. And if they want to go out and about without us, that's fine too, of course.

And if we have people we know just a bit, or people who like plenty of time to themselves, then we can do some things together, and some separately.

It works so well that the flat had people staying for about four months of 2007, overall - with gaps in between, of course - and I think will have been used for over half of 2008. We have so many visitors that we had to set up a Google calendar for it, so if either Richard or I get a phone call or email asking whether it's available, we can quickly check online.

Last week some friends of Richard's who work in Egypt were staying; they had various meetings set up, so we didn't see much of them.

The day after they left, Ruth arrived - the younger daughter of a home educating email friend, whom we met in the UK seven years ago. Ruth is now an adult, and an experienced sailor, so Richard was delighted to take her sailing at the weekend - they had a particularly good day out on Sunday, when the weather was perfect. Richard wrote about Sunday's sailing on his Wayfarer blog.

Ruth ate with us on Saturday and Sunday evening, and we even managed a game of Rummikub, which she won...

On Monday, Ruth's friend Alice arrived. It was pouring with rain at the time, and while I, along with the locals, was very pleased to see some serious rainfall this early in the season, people just arriving from the UK weren't so happy to see what looked like English weather in Cyprus. However it stopped after a couple of hours, and the sun came out again yesterday.

So Ruth and Alice spent yesterday exploring the town and sitting in the sun, and planned to do something similar today. And last night, they took us out for a meal at Alexander's: 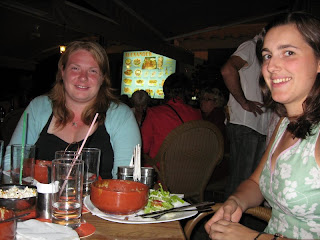 The food is always good with generous portions, and they have a fair selection of vegetarian dishes. Despite feeling fairly full, Ruth decided we would have some ice cream, and we all opted for the wonderful Negrita chocolate sundae... the waiter was a little startled when she asked him to bring four Negritas, so we quickly assured him they weren't all for one person - but then couldn't resist setting up this photo: 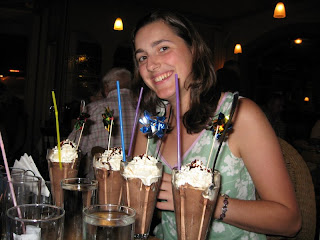 Lovely pictures ;-) Glad you had a meal out together.

Thank you for sharing your home. What a blessing as is the rain!!!

I love this place. A truly great place, we use our MyTouristCard at the restaurant and love George. Cant wait to our next visit