Some years ago, we were 'warned' by a police officer that we were parked too close to a corner. We weren't parked for long, and we were not obstructing anyone's view; since other cars around were parked a lot closer to the corner than we were, it was slightly surprising. The officer took our car registration, and warned that if it happened again within the next year we would be fined.

I mention this in passing because, at the start of October, there were some new penalties introduced in Cyprus. Road accidents used to be one of the highest causes of people dying on the island, and there are still far more than there should be. So it was hoped that, by introducing these strict fines, to be enforced immediately, drivers might be more careful. I don't drive myself - I never have done - but even I notice regular, dangerous driving - in particular people chatting on their phones while they drive, or speeding up rather than slowing down as they approach an orange/amber traffic light that's about to change to red.

I was particularly amused - if that's the right word - by the new fines for parking:

No mention of parking on corners, which seems to be the most dangerous of all, particularly if it's on a junction with a main road. And while Richard is usually very careful to park on the correct side of the road, I didn't realise it was even a legal requirement on the island, let alone a fineable offence not to do so.

I gather there were a few fines issued during the weeks following these new penalties, but we haven't noticed any change in the way people drive or park. When I'm walking in the morning, it often seems that there are more cars parked in one or more of the above illegal ways than there are cars parked correctly.

I've taken a few photos to illustrate, but as they are examples of thousands of others, I've blocked out the number-plates, turned the photos into black-and-white, and cropped so that it shouldn't be too obvious where they were taken. I don't want anyone to get into trouble on my behalf - and compared to some of the other offences on the list, illegal parking, particularly in residential areas, isn't so dangerous.

Here, for instance, are two cars on the pavement. One facing the right way, the other not:

Here's a different view of the same cars, showing how close they are to the corner of the street: 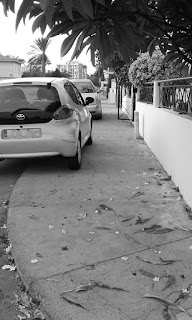 Another street, another two cars facing the wrong way and partly on the pavement: 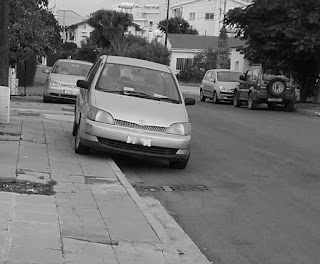 And this one is an example of a car parked on a corner, almost entirely on the pavement, AND facing the wrong way. I assume that the penalties are cumulative.. but they don't seem to be putting people off. 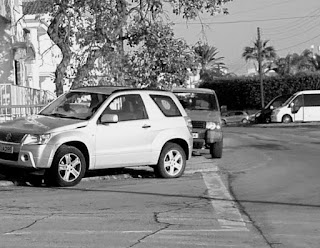 I am not the only person to be writing about this kind of thing - just a week ago there was an article in the Cyprus Mail about 'pavement bandits' - making the same point, but illustrated with cars in colour (though, again, with no visible number-plates).
Given that there are so many trees growing in the middle of pavements, and some areas with no real pavement at all, I'm not convinced that, in a residential area, it makes that much difference if cars park on the pavement - indeed, it gives more space for cars to pass each other on the road. However that article does point out that for people in wheelchairs, or parents pushing children in buggies, illegally parked cars can force them into the street, which can cause accidents.
It will be interesting to see if driving and parking starts to improve, but there's no sign as yet.

PS If anyone who has read this lives in a country where 'pavement' means 'the paved area of a road', please substitute the word 'sidewalk' for 'pavement'.