Although the evenings are chilly, the weather is really very pleasant at the moment. I'm sure it's usually cooler than this by now, but it's been around 20C for the past week, during the daytime, with sunshine most of the time. Today it did cloud over in the early afternon, and then poured with rain for about ten minutes.. but that's the first rain in a couple of weeks.

Of course, we do still need rain desperately. But water is coming in tankers from Greece, and a new de-salination plant is being built. In the meantime, it really doesn't seem too hard to cope with mains water only being switched on for about ten hours, every other day.

The plants are doing well, enjoying the cooler weather. Right outside our front door I have three plants, all of which were given to me as house plants. But we don't do very well with plants indoors - other than our poinsettias, they all start to droop and look miserable after a few weeks. But moving them outside seems to give them a new lease of life. Here's a kalanchoe that Richard bought me about a year ago. The pink flowers died fairly quickly, but it stayed alive through the summer, and now is a mass of pink again: 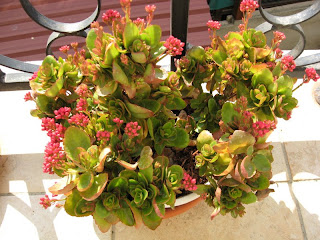 More surprising, at least to me, is a chrysanthemum plant that we were given, also around a year ago. It flowered nicely for about a week, then started looking very tired and sad. I've never had a chrysanthemum last for very long, but I put it outside, and cut off the dead-heads, and kept it watered through the summer... and around the beginning of November, it rewarded us with the most amazing yellow blooms which are still going strong: 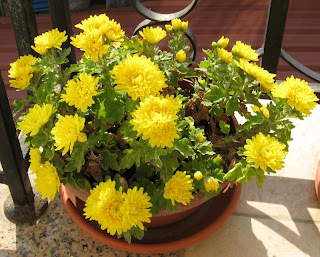 I can't quite believe it's already a week into December. I never do much in preparation for Christmas before the end of November, and then always feel caught out when the first week of December races past, almost unnoticed. I was going to buy various presents online today, until I read that it's apparently the most popular online shopping day of the year. I don't want to overwhelm the online shop servers, or get my orders confused with other people's, so I'm going to leave it until tomorrow.

I've bought a load of Christmas cards, but haven't yet written any. That will take almost an entire day, quite apart from the hour or two necessary to stick the stamps on and post them. I've jotted down notes for our family newsletter, but haven't yet found relevant photos or even typed it. We decided that if we're going to put up a tree and do some decorations, we should do them before Wednesday when Richard's colleagues and their families are coming for a festive lunch, but we haven't done it yet. Perhaps tomorrow...

It's been a busy few days, for someone like me who's an Introvert and needs a lot of time alone. On Friday, our house group met here for about 45 minutes, to eat bread and cheese, and a lentil soup I'd had simmering in the slow-cooker all day. Then we went on to the inter-church youth group 'variety night' fund-raiser, where there were mince pies and other goodies for sale. On Saturday, I baked my first 24 mince pies, since we were invited to a 'tea' in the afternoon, with more cake and other goodies. On Sunday we were out for lunch with friends.

In addition, the German lady I mentioned in my previous post stayed in our guest flat until Sunday evening; I took her out to the local supermarket a couple of times, and helped her find things - communicating with sign language, and the few words of English that she knows, and some references to her English/German dictionary. Then I took her to church on Sunday morning.

This morning was the monthly meeting of the Larnaka Christian Writers' Association; rather than meeting in the home of the group founder, we met at the Craft and Hobby Centre in Ayia Eleni Street for a couple of hours, and then had lunch together. Good value sandwiches or salads, and excellent quality!

Tomorrow I help at the Toddler group run by one of the churches, and on Wednesday is the work lunch...

I really should remember how December seems to get full of meetings and gatherings, and get everything organised for Christmas before the end of November. But somehow, it never happens.
Posted by Sue at 20:29