I didn't have any great enthusiasm for putting up Christmas decorations this year. But we decided that if we were going to decorate, we should do so before today, since we were hosting a lunch for Richard's colleagues and their families.

We didn't get around to it on Sunday, or Monday, so yesterday evening was the last opportunity. So Richard got everything out, and put the tree together - helped, of course, by the cats. Sophia was most interested in the process of piecing together the tree branches: 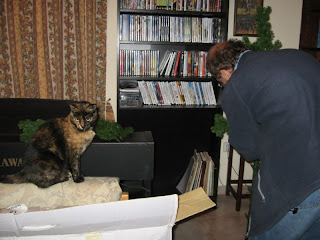 Tessie tried to get inside the box, before I put it away again. 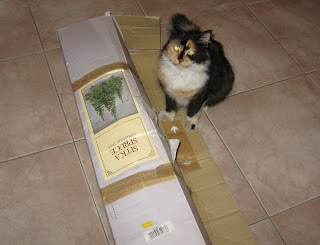 We've had this artificial tree for about sixteen years now; it looks a bit small against our tall bookcases, but it's in good condition so there's no point thinking of something different. And it does look at least somewhat festive now it's up and decorated: 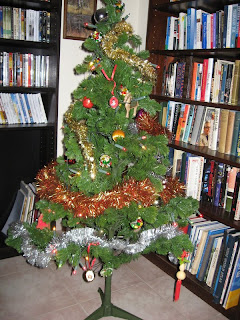 Of course it looks better with the tree lights on, and the house lights off, although it's hard to capture on a photo: 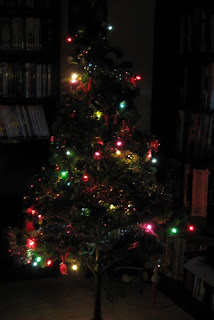 After the tree was up, I put a few bits of tinsel around some pictures, and several candles in their Christmas holders around the bookcases. We also put out the small, somewhat stylised Nativity scene we were given when we first moved to Cyprus.

Cleo decided to join the lambs in the stable, but was a bit large for the scene: 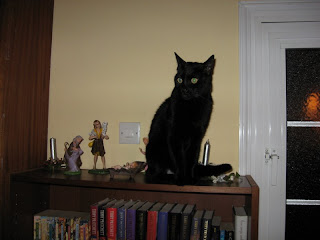 Today there actually were 12 of us at lunch altogether, although only 11 at any one time since one person had to leave early and another came late. We had baked potatoes with toppings, and a bit of salad. I'd made some more mince pies, most of which disappeared; someone brought some clementines, and someone else brought some chocolate biscuits. All very enjoyable, and once again I was very thankful for the dishwasher.

I ordered some presents yesterday, and got out the Christmas card list, although I haven't actually started writing cards yet...
Posted by Sue at 22:08

I love cats, and I love your cat

Once upon a time we had a cat who habitually knocked over the tree and got into much other mischief. We learned to tie the tree to hooks left in the ceiling for formerly used swag lamps.

I have to say that your cat definitely looks like a Cypriot! Good god but they grow cats HUGE there. LOL

That is so cool that your family was part of a performance at Kurion!!

Yay for getting the tree up!

I was playing around with the camera, trying to figure out how to get a good photo of our tree with its lights on. Never turned out.