Ten years have gone by since I launched my first website at Geocities. It was a few pages about home education in the UK. The only reason I started it was that Daniel, who was 12, wanted to build a site; but it had to be in a parent's name before he was 13. So I registered, and then thought I might as well make a web site too... and since, at the time, there was almost nothing online about home education in the UK (despite hundreds of American homeschooling sites) that was my topic.

The site has gone through many changes in the past ten years. I delved into the 'Wayback archive' which has snapshots of websites over the years, to see how it used to look. The original URL of my site was http://www.geocities.com/Heartland/Lake/3262, which isn't exactly intuitive, but I must have used it so many times that I had no trouble remembering it!

The earliest mention I could find was June 1999 If anyone doesn't want to wait for the archive to load, but would like to see how it looked, here's a quick screenshot I took: 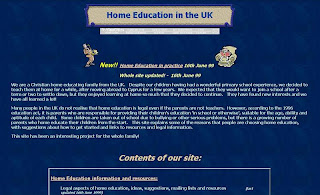 - I remember the blue background, a Frontpage theme that I quite liked. I had forgotten the ugly banner, though. It looks very dated now!

I wrote quite a few new pages over the months, then in 2001 decided on a radical - but much simpler - design. I kept the clip-art of the clarinet player and the boy reading - supposedly Daniel and Tim - but made the background light rather than dark. I did have one or two people email me to say they liked the blue, but I stuck with the new design. Here's how it looked in 2001, and here's a screenshot: 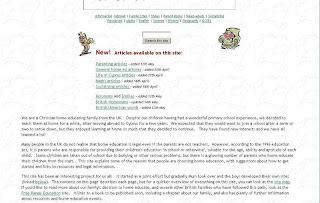 I was getting a bit fed up with FrontPage as an editor, and had been given free the program Adobe PageMill with some hardware, so I changed to using that. I learned about HTML tables... and redesigned the whole site to this in 2002. Here's the screen shot: 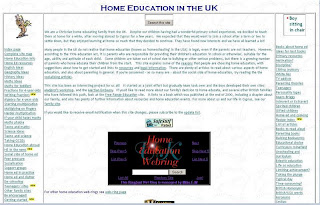 - lots of links down each side, which people told me made them more likely to explore other pages. (For some reason the picture of the boy reading didn't load when I did the screenshot, but it was still there).

I stayed with this design for some time, making only minor adjustments - here's a 2004 version from the archive, with its corresponding screen shot: 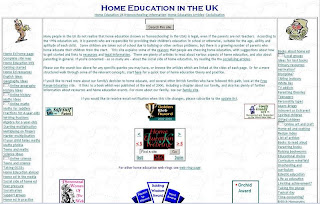 Geocities had opted for easier-to-remember URLs by then, so my site was also known by my username of the time, sueincyprus, which replaced the Heartland/Lake/3262 part of the address.

The problem I had with the navigational tables was that every time I added a new page, I had to change the links on several others in order that people would find them. And as the number of pages increased well beyond 100, it became more and more unweildy. And as this combined with our home educating years drawing to a close, I did very little to the site for some time.

Then in 2006 someone suggested I register a suitable domain, move it from Geocities to a host, and instal some kind of advertising myself. I was still getting a few emails from people who liked the site, and seeing around 200 visitors per day, so I thought this could be an interesting project.

Richard provided some server space, and I registered home-ed.info, moving the site there in May 2006. I got rid of the tables and all the clip-art, which by now was looking distinctly old-fashioned, and tried to include text links on the front page. Initially, it looked like this - here's the screen shot: 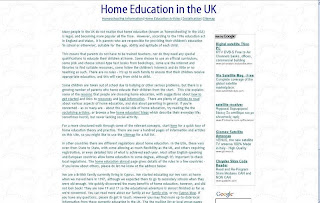 I still wanted some kind of navigational structure, though, and I wanted to give the site fully 'clean' code. So I switched to using the open source (free) software KompoZer, and experimented with this style in early 2007 - here's a screen shot: 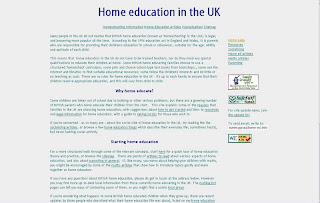 But I was never happy with it. So in Spring of 2008, I searched for some CSS templates, and learned a bit more about how to adjust the designs, and finally, with advice from family and friends, produced the home-ed.info site as it is today. 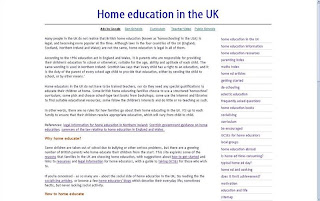 I still add to it, from time to time, and include extra links when they seem relevant. It now receives around 500-600 visitors per day, mostly via search engines. I get two or three emails per month from people who have found it helpful, often asking further questions, which I try to answer.

I hope the site will still be around in another ten years, but have no idea whether it will go through so many design changes in the next decade. I suppose it depends on website trends, and whether dark text on a light background suddenly starts to look terribly old fashioned in a year or two...
Posted by Sue at 09:00

Congratulations! I wasn't around for the early version but remember your site from about 2002 - I found it really helpful and have refered to it a lot.
Looking forward to watching it for another 10 years!

Yes, congratulations. Yours was one of the first websites I came across (the 2002 version!) when looking into HE as well. Hope you do keep it up for another 10 years!!

From one hardworking webmaster to another ...
Happy Ten Year Website Anniversary!

Surprising how time flies by. Happy 10th on your web site.

I just passed the 11 year mark on mine. I didn't go Anonymous since I got to see yours and figured it was only fair to let you see mine :)

That reminds me I need to update some of my web pages. Not the Geocities ones, though. Yahoo lost them for two months, and by the time they found them again I'd moved them to Bravehost.