Strawberries tend to have a longer season in Cyprus than they do in the UK. When we were first here, we could get them from about April until around the end of June. Once or twice I did notice very highly-priced strawberries from other countries that appeared around the middle of February, for Valentine's Day, but they never looked particularly tasty.

Two years ago, we had our first strawberries at the beginning of March. Last year it was similar.

This year, we started seeing strawberries a couple of weeks ago. They even claimed to be from Cyprus. I don't know quite how, unless they're grown in greenhouses or under polytunnels - and they were fairly expensive.

But this week, our local Froutaria Achna has - at times - been selling 500g strawberries for €1.20 which seems very good value to me. So I've bought two or three packs: 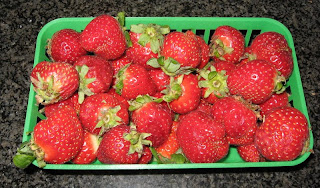 They're not the greatest strawberries - not like freshly picked English-grown strawberries in June. But they're not bad. Yesterday I bought another kilogram. I've washed and frozen about half of them, as they won't keep that long. I know frozen strawberries are a bit of a disaster, usually, but we use them in fruit smoothies as soon as the weather gets a bit warmer.
Posted by Sue at 14:09

We bought 500 grams there last week, and ate them in about five minutes! No, they weren't quite like June strawberries, but they were MUCH better than April ones imported (to Germany) from Spain! :-)