Our cats have a water bowl in the kitchen. They don't drink milk - it's not supposed to be all that good for cats anyway - and they like their water to be fresh, changed at least daily.

Bizarrely, though, they also like drinking water from puddles, even when it's not at all fresh.

Even more strange, though, is that Cleo, who spends most of her time upstairs, likes to jump into the bath when anyone has finished showering, so she can lap up any drops of water that remain. She started doing that shortly after we moved to this house.

Then she started thinking that there should always be water to lap in the bath. She would jump in during the daytime in the summer, when it was dry, and make a fuss. So I started putting the plug in, and giving her some water to drink. After all, I didn't want Cleo to get thirsty, and Cyprus can get very hot.

I'm not quite sure when she decided that she would also use the bathroom sink. Or when Sophia realised too that this was a good place to have a drink. This didn't happen a year ago, or even six months ago. But nowadays, when I get up in the morning, I often find both of them sitting on the bathroom sink, asking for some water. It isn't even summer, and they could perfectly well come downstairs to drink at their bowl... but somehow I always give them some in the bathroom, then wait until they've finished before I wash my hands. In some fresh water, of course!

They don't drink together. Sophia, being the bossier one, usually gets in first. Here they are on a couple of recent mornings: 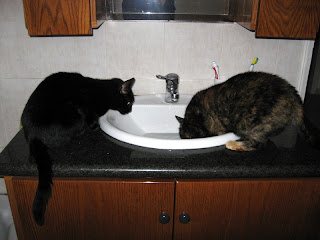 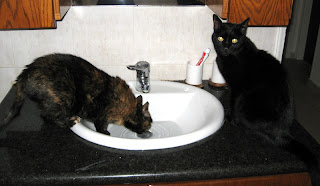 Hi Sue....we had a cat once who would get up on the sink in the bathroom and want the water turned on so he could drink from the faucet.....our cat now wants the glass shower door open after a shower to drink from the puddles on the shower floor. They certainly all have their own personalities.