Is it Spring in Cyprus?

When we lived in the UK, I loved the first signs of spring. Snowdrops poking through the ground herald the end of winter, then daffodils, and primroses tell us that spring is on the way. The trees that all lost their leaves start to show new life. This winter has been particularly cold in the UK this year. Temperatures below freezing for several nights, and more snow than has fallen in at least 18 years. Nothing to the cold we experienced when we lived in Colorado (in the USA) for a couple of years, but still much colder than usual.

Of course, in the UK it's sometimes hard to spot Summer. Spring lengthens, and then Autumn starts, with a few warm days - perhaps - some time in July or August.

In Cyprus it's rather different. Summer is pretty much guaranteed, from early June until late September. There's autumn - of sorts - which means that we start to find our sweatshirts and long trousers again after months of shorts and tee-shirts. We dig out the thin duvets, and get the heating serviced. We might even have to use the electric boost if the solar heating isn't working too well on the water.

We realise it must be winter when we need fleeces as well as sweatshirts, and the thick duvet rather than the thin one. But citrus trees carry on producing fruit, and many flowers still bloom. A few trees lose some leaves in Autumn, but not many. Each tree has its own cycle, and plenty seem to be evergreen.

As for Spring, it's a bit negotiable. There aren't many spring bulbs here; the ground never gets cold enough for them. But this morning I actually felt warm enough to go out to the local Froutaria without a sweatshirt on. There was a pleasant light breeze, and I suppose it was about 18C, but for some reason it felt warmer than it has done recently. For an hour or so, anyway. By lunchtime I put the sweatshirt back on again, and I'm not ready to abandon the thick duvet in favour of a thin one yet.

I mentioned that we used our sole lemon a few days ago. Today I noticed some lemon blossom on the tree: 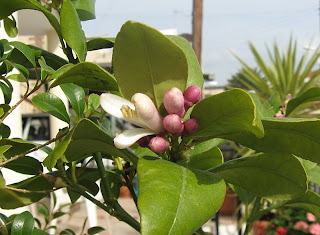 Walking to the supermarket, I saw plenty of weeds on empty land, which we usually expect in March rather than February: 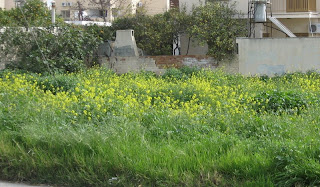 and also these rather attractive flowers, which I assume are some kind of marigold. They look bigger than French ones, but smaller than African ones. 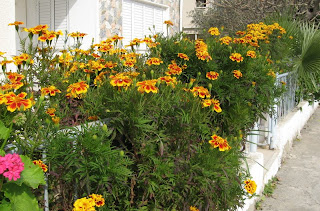 Geraniums and bougainvillea are also colourful at this time of year, and many of the citrus trees are still laden with fruit.

This is a time of year when I really like being in Cyprus.
Posted by Sue at 16:59

It sounds idyllic! One of the things I miss about living in Ontario is the four distinct seasons - there isn't all that much difference here sometimes. I was out yesterday in much the same clothing that was appropriate last August.