Re-painting in our guest flat

We finished painting our ground floor guest flat a little over two years ago. Mostly in pastel shades of cream/peach/light brown - whatever we happened to have in, mostly.

In the last couple of years, we had more guests than we expected - mostly family and friends from the UK, but also some friends of friends. This year, so far, the flat has been booked almost constantly. We're really pleased about this; we hoped it would be well used, and it certainly is.

However, with only short gaps between visitors, I've been washing bedding and towels, quickly checking kitchen supplies, making up beds.. and not really doing anything else in the flat. Our guests usually leave it clean, so I've barely needed to do any dusting or mopping.

And I haven't really looked at it.

I had noticed, however, that the walls by the stairs in the main part of the house were looking rather grubby. Like this: 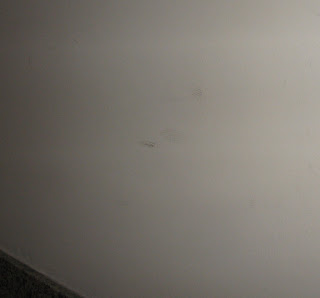 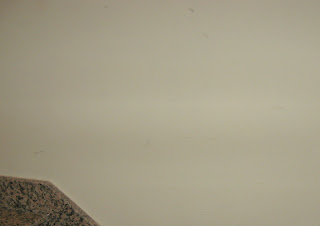 and had been thinking for a while that I needed to touch up the paintwork. (Colours aren't accurate in these pictures. The paintwork is actually a very pale apricot.)

This week, for the first time in months, we had a five-day gap between visitors in the guest flat. So I had more leisure to wash the bedding, and sat down for a moment in the main bedroom. I was a bit startled to notice that one of the walls looked something like this: 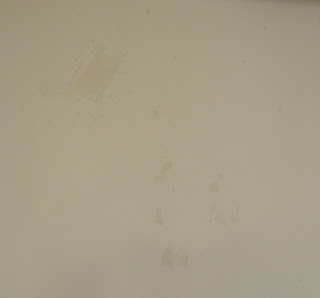 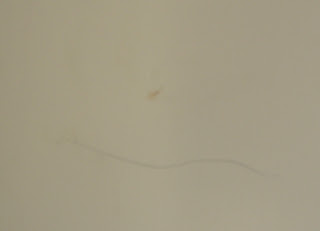 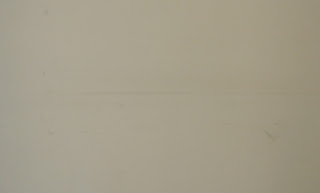 I have no idea how long they have been like that. Perhaps a year or more. Maybe the marks were more visible due to bright sunshine, or maybe I was just feeling more observant. We remembered that we only painted three of the walls, so some of those marks may have been there for over two years. Maybe some of them are due to old marks creeping through the paint.

Anyway. Since we're about to enter another phase of back-to-back guests (so to speak) until around mid-June, I thought I'd better do something about these walls during this gap.

On Friday, knowing that the next person to stay was due Sunday evening, I decided - tired though I was - that I'd better get around to it. So I looked for the list I had made of all the colours we used when painting the house.

I found the list... of all the rooms in the main part of the house. The hall and stairs are the same as the living room and my study, in a shade called 'Warm Apricot 1' . I'd made a note of the paint shade for the kitchen in the guest flat, too. But there was no record of what colours we'd used in the guest flat living room or bedrooms.

So Richard looked in our paint cupboard, and found four cans with paint that looked approximately right, although there was no Warm Apricot for the stairs. We took them downstairs. He found an inconspicuous part of the guest bedroom wall, and tried the two that looked closest.

I sat there, watching paint dry. It wasn't very interesting, but I was much too tired to do anything else. Alas, neither of the colours was correct.

No left-over paint for the room, and no idea what colour it was.

Then we remembered that we had used some leftover paint just to make it acceptable for our earliest visitors, intending to re-do it at some point. Only.. that was nearly two-and-a-half years ago. So we had to options: (1) leave it (2) buy some new paint and do the whole room. It was certainly tempting to choose option (1) but although our last visitors must have coped with the strange marks on the walls, if they noticed them, I didn't feel comfortable leaving them for the next few occupants. And I definitely didn't want to think about painting towards the end of June, which is the next time the flat is likely to be empty for more than a day.

Friday was Eastern Good Friday. I'm sure when we first came to Cyprus, it was a public holiday with everywhere closed. Sure enough, the banks and Post Office were shut.. but all the shops appeared to be operating with normal opening hours. So we went to see if our favourite paint shop was open, and it was.

We decided that, rather than choosing yet another shade, we'd buy a biggish can of 'Warm Apricot 1'. We thought it would look good in the guest flat master bedroom, and we could then also use it for the marks by the stairs.

I then spent a couple of hours in the afternoon doing the first two walls of the bedroom. Once I'd started, of course, I knew we'd have to finish. Richard took over for an hour or so, doing some tricky patches around the air conditioner: 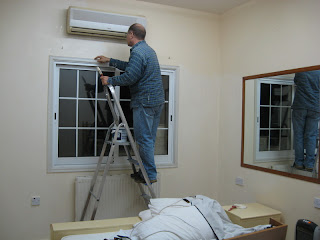 .. then I finished it. I was worried it might need a second coat, but by the time we'd washed the brushes it was 10pm and I was SO tired I could barely keep my eyes open.

Yesterday morning, Richard went out sailing for the day. He left about 8.30am, which is quite early for him. I decided to get the guest bedroom sorted out in the morning. Thankfully the paint had dried evenly, and although it's not perfect it's MUCH better than it was. Well worth doing.

The floor was very dirty, particularly the area which is usually behind the bed, and impossible to get at. So I cleaned that. I scraped scraps of paint from the light and power switches. I even managed to push the bed and bedside cabinets back, and put the curtain pelmet up. 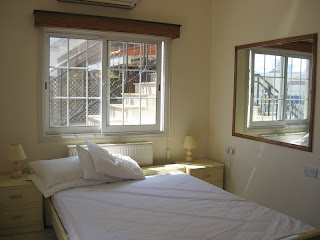 Because of the sunlight, the camera didn't use flash for that, and the colour is close to correct in that picture.

Then I decided that, as it was a lovely sunny day, I might as well wash all the curtains from the room, since they hadn't been done for over two years and were probably very dusty. Sure enough, they dried in a couple of house, and thankfully didn't need ironing. Meanwhile, I cleaned the rest of the guest flat, including doing the bedroom windows, which of course looked extremely dirty with the curtains gone!

By late afternoon, I had the curtains back and the bed made up for our next visitor: 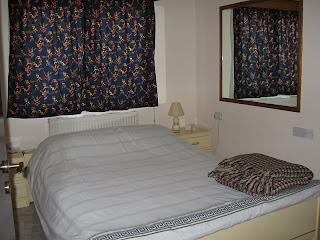 There was still a slight smell of paint by mid-afternoon, despite having several windows open, so I put half a cut onion in a saucer of water to absorb it. By this morning, I could barely smell paint at all.

We still haven't done anything about the marks on the wall by the staircase, which - if anything - are worse than the ones in the guest bedroom. But we can do those any time.

Whether or not we will actually get around to them remains to be seen...
Posted by Sue at 15:17

I've recently found your blog and have enjoyed reading about your life in Cyprus. I lived there in 1973 for a short four months with my USNavy husband. We lived in a suburb of Nicosia. It was a lovely time! Terry