It's hard enough for humans to stay cool when the shade temperature is 30C or more, and the sun temperature several degrees hotter. Summer came later than usual in Cyprus this year, which was wonderful. But I have little hope that it will get cooler again for at least three months now.

In the attempt to stay reasonably cool, we have naturally exchanged our jeans and fleeces for shorts and tee-shirts, our socks and trainers for sandals or flip-flops. Moreover, being people of the 21st century we use ceiling fans, and - when it's humid, or when a computer is on - air conditioning set to 28C. We are, of course, quite spoilt. Even thirty years ago we would simply have had to survive the heat... although, of course, we would not have had computers at home.

The cats are not so fortunate. They can (and do) tend to follow us around in the hope of air conditioning. They also sleep a lot more during the summer. And they are moulting (shedding) fur all the time... but not as much as they would probably like to. I am very thankful not to have to wear a fur coat.

Sophia, most sociable of the cats, often sleeps on the back of the sofa in my study: 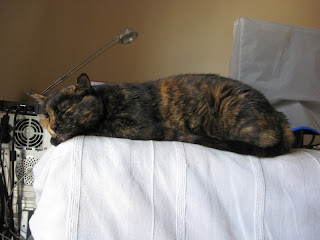 Cleo has always liked high spaces. Here she is on top of the DVD bookcase, perhaps hoping that the ceiling fan will waft some cool air in her direction: 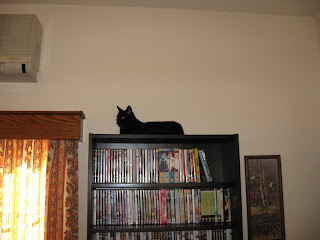 Tessie really doesn't like high places, but even she will jump onto a lowish bookcase and hang her paws over the edge: 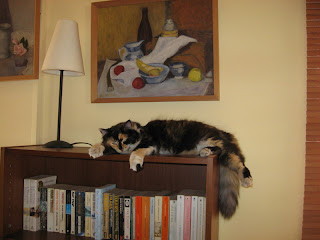 Sophia isn't impressed when Tessie does this, however, since she considers the dining room bookcases to be her particular spot. It's where she likes to sit when we're eating: 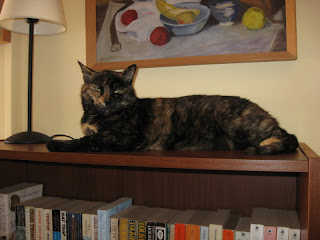 Cleo isn't usually interested in such low spots - here she is on another occasion, on top of one of the non-fiction tall bookcases in the living room. She's very beautiful, but not particularly photogenic: 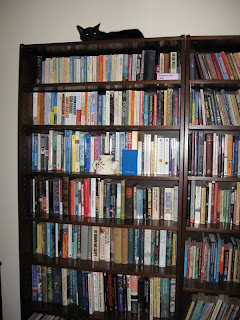 Tessie, on the other hand, is remarkably photogenic. This time she's trying out the bottom shelf of a dining room bookcase (the last one... authors beginning with W on the bottom shelves). Perhaps she's figured out that heat rises, so it might even be cooler down lower. Or perhaps it's that she really does not like heights: 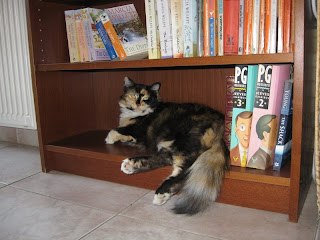