One thousand books in ten years

I don't know exactly what it was that made me decide to keep short reviews of everything I read... I'd done so periodically since I was a child, but never kept it up. However I determined, at the end of April 1999, that I would write down notes about every book I read. Perhaps I was getting irritated that I couldn't remember whether or not I enjoyed something when I thought about re-reading!

I managed to keep it up. Eventually I started blogging reviews rather than writing them down, and over several months transferred all the ones I'd written in a notebook onto my blog. In 2002, 2003 and 2004 I didn't read many books at all - less than 75 each year - but in 2005 I managed 90, and since then have read well over 100 per year.

If that sounds like a huge amount of time spent reading... it isn't, really. I read quite fast, and usually only for about half an hour in the morning, and perhaps half an hour in the evening. Unless, of course, something's particularly gripping or I need to relax during the day. I don't watch any television at all, and watch perhaps 20-25 films (on DVD) at most in a year.

Since Cyprus doesn't have libraries with good selections of English books, I have a good excuse to keep on collecting more. Particularly since I have four or five friends who like to borrow books regularly! I was delighted to be invited onto the panel of reviewers for The Bookbag site a couple of years ago, since they regularly send me new books to review for them (I usually put shorter versions of these on my book blog).

And, although I've probably used these photos before, here are a few of our bookcases. These are the first four fiction ones in the dining room: 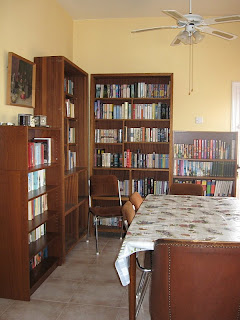 .. and here are the two non-fiction ones (secular on the left, Christian on the right) in the living room: 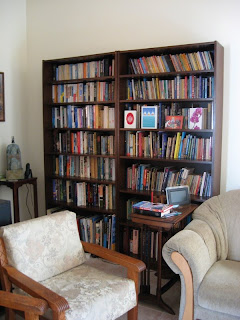 I can recommend a blog for anyone wanting to keep track of books they read, with longish reviews. I also keep much shorter reviews in four places online: Visual Bookshelf (which is part of Facebook); AllConsuming (a bit buggy, but it also enables me to track DVDs watched); Bibliophil (the first one I found online, which has a facility to input corrections, and an export option) and my current favourite, GoodReads, which is what provides the reading widget in the sidebar of this blog.
Posted by Sue at 20:10