Short version of this post: we had some of our air conditioners serviced this morning. Highly recommended.

One of the best things about this house, which we moved to three years ago, is the number of air conditioning units. There is one in each bedroom, and one in each of the rooms on the main floor. There are even a couple in the guest flat.

I didn't want to go around the house taking photos of air conditioners - which are not exactly very beautiful or photogenic - so I had a quick look in my Picasa archives, and came up with a few photos from the past, mostly around the time we moved in 2006. They're photos of rooms which I've cropped a little to show the aircon units more clearly, for those who don't know what they look like.

Here's the one in our bedroom, for instance: 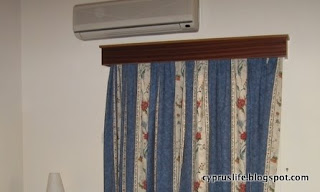 and here's the one in Tim's room:

Here's part of Tim's one again, in close-up, when Cleo discovered a new high place to do her panther impression: 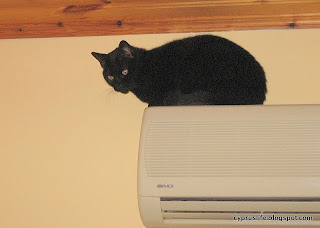 You can see the kitchen air conditioner at the far end, above the window: 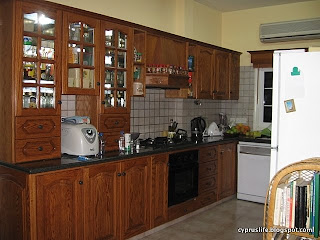 While it might sound an expensive luxury, modern air conditioning is not all that expensive, if used wisely. Central air, as found in the USA, can be extremely expensive - particularly if set on low temperatures - since it cools an entire house all day. But individual units only need to be switched on while in the room - and then not all the time. We also have ceiling fans in our living room and dining room, and find they are sufficient to cool us during most of the day. 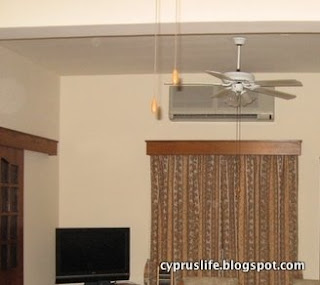 I do run an air conditioner in the study, where my computer is, for most of the day during the summer months. Computers become increasingly unreliable when the temperature is more than about 30C [that's 86F, if anyone from the USA happens to read this]. Too much heat for too long can damage them irreparably. So it's much more sensible to run an air conditioner when the computer is on. We run it at 28C [82F], which is sufficient to feel pleasantly cool, since it also de-humidifies, and it ensures that the computer does not overheat.

We also run the air conditioners (again at 28C) for an hour or two at night in any occupied bedrooms. Although the temperatures drop to about 26C overnight, we can't leave windows open or we would have dozens of roaches and other unpleasant insects in the house. And it becomes increasingly humid overnight, too, which makes it difficult to sleep. So we switch on the aircon about ten minutes before going to bed, and set it to switch off automatically at around 11.45pm. That's sufficient to keep the room cool enough until morning, other than in an extreme heatwave when we might run it all night.

Last year, Tim didn't feel that his one was running too effectively. It didn't matter too much, since he left Cyprus at the end of June to go to the UK, so it wasn't used for the rest of the summer.

Meanwhile, Richard has been using Daniel's room as a temporary study for himself in the evenings. And has found that his air conditioner really wasn't very effective, unless he ran it at a very low temperature (like 24C or even less). He tried cleaning it with an anti-fungal spray last autumn, along with a few of the others (something which should be done at least once a year, but it's the first time we actually found the spray in a shop...). It didn't help.

And at the end of last summer, the unit in the study dribbled water a couple of times. Not a huge amount, but it was a little worrying.

So we said we'd get them serviced before summer this year. Of course, that didn't happen. We started using the one in our bedroom a couple of weeks ago, and I tried out the study one... it seemed to be fine. The one in Dan's room still wasn't at all effective, however.

So finally Richard got through to the man who services the office aircon units. He arrived this morning, about 9.30.

Daniel's unit, it turned out, had very low pressure. It needed a new gas cylinder. Not being mechanically minded, I'm not entirely sure why an electrically powered unit needs a gas cylinder... but apparently that's what's causing the problem. So it was replaced.

Then he looked at Tim's, which Richard hadn't cleaned last year as it's very difficult to open. It was apparently VERY gunked up. So he took it to pieces, and cleaned it very thoroughly. It took nearly an hour.

Then he looked at the one in our room. Richard had cleaned that, but apparently it was almost as dirty as Tim's. So he took that to pieces too, and cleaned that as well.

Then he looked at the study one.. and to our surprise, said it was very clean. He poured some water in somewhere to see if it leaked, but it didn't. He said it might have been due to high humidity, and really isn't something to worry about.

We didn't ask him to look at any of the others, as we rarely use them. His recommendation was that we do a spray and basic clean of each unit every year, and get a full service once every three years.

So that's what we'll plan to do. Whether we actually succeed is anybody's guess...
Posted by Sue at 15:44

Gasses are Introverts. They need their personal space to be happy.

When you squish gas, with a "compressor" then all the molecules are bouncing around much more tightly, getting in each others faces, and don't have the space they need to relax - and so are much more hot and bothered.

When you de-compress it, or unsquish it, you give them all a lot more space, they can bounce around at their own pace, without feeling intruded upon, and so are way more chilled out.

By cleverly choosing where you squish the gas and where you unsquish it, and then blow the resulting coolth around, you have an AC unit.

Ah yes, the bit I forgot.

Gasses, of course, don't like being manipulated in this way, and so try to escape. They don't have like "the great gas bottle in the sky" to dream about, they just dream about the sky in general.

To a gas molecule, the concept of the infinite universe, of gazzilions of miles of vacuum and nothingness is very attractive.

Thus they try to escape, and because gas bottles are solids, not gasses themselves, they're more Extroverted, and so are happy to keep on gleaming and talking, and not even notice the gas creeping out the back door when it's not looking.

Hm. I wonder if we could extend the analogy?

Gasses are ISTJs, maybe, solids are more like ESTJs, liquids ENFPs, and plasma... ESFJ? Maybe? I dunno... I've not had much contact with plasma. Probably that's a good thing. Any physicist Myers-Briggsians around?

This could either be fun, stupid, or perhaps offer amazing insight into the world around us...