A short visit to the beach

We don't usually swim in the sea until the beginning of July, at the earliest. We've acclimatised somewhat to Cyprus weather, so the water feels chilly earlier in the year. Even in July it usually takes us a few days to get around to deciding to go.. This year, another problem was that my swimsuit was really too tatty to wear any longer (it must be about fifteen or more years old) and we didn't manage to find a new one last year.

But last Friday we went to Orphanides, and bought the only one that (a) was my size (b) was not black or pink (c) we both thought acceptable. I was a little shocked at the price tag being 32 euros... but there was 20% off, so it was actually 26. It still seemed a lot to me for something so small and light.. but then again, I hadn't bought one in a long time.

Yesterday, Richard came back from work early, so we went to our usual spot for swimming, near McKenzy beach, but with free parking on the street, or in waste ground opposite. It's probably packed during the daytime, but we don't go to the beach before around 5pm usually, when it's quieter, and the sun is less powerful. 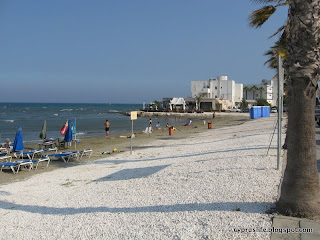 Last year, some cars parked on the beach itself, but this year they've put down some white stones near the top, making it look much more attractive. There were still a few people around by the time we got there, but it was by no means crowded. We didn't bother with a lounger or umbrella; they're worth having if spending a day - or even a few hours - at the beach, but not for a short evening swim. 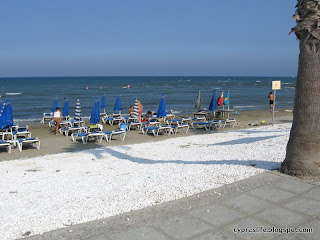 The water was perfect temperature. So we waded out - quite a way - until it was deep enough to swim in. Neither of us is actually very good at swimming - anyone who remembers me from thirty-five years ago might recall that I LOATHED swimming at school, and was very bad at it. Somehow, swimming in the sea is much more pleasant, as is the freedom to swim as much or as little as I wish, using whatever stroke I wish, and not put my face in the water.

I suppose we only swam for about five minutes... I had a slight worry when Richard called that I was going out of my depth, and realised that he was right. I'd been swimming parallel to the shore, but had forgotten that we'd walked out past a sandbank, and that the depth isn't the same at all parts of the beach. So I swam in a little until I could touch the sand again with my toes.

We were probably in the water for about twenty minutes in all. We found we could really only swim in one direction as it was quite blowy, and the waves would have gone into our faces if we'd gone back the other way. So we walked back to shore, then lay on our towels on the beach for another twenty minutes or so to get dry. I'd quite forgotten to take a book, so we didn't stay long.

First swim of the season - I hope we remember to go again, as it was really quite enjoyable. Not as much fun as going with children, but certainly more peaceful.
Posted by Sue at 11:13

I still can't swim, I really must learn. Looks lovely though :o)

LOL at your last sentence! Well, tomorrow you'll get the fun, at the sacrifice of peace. :-)