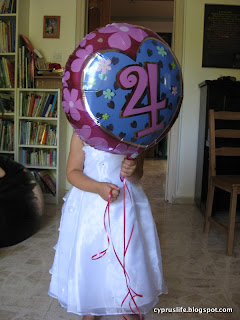 Katie is the young lady concerned, sister of my youngest 'best friend' Helen: 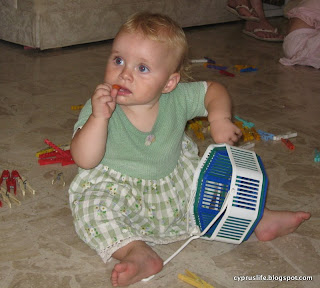 It was basically a pretty quiet party. Katie and Helen's two older brothers were there, doing a little organising, and there were four other little girls (although two arrived quite late). There were also various adults, including the mother of one of the guests, and the grandmother of another.

It was too hot to be outside, or to do anything very energetic, but some of the children played a clothespin game: 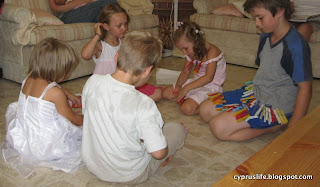 (you might think those are clothes pegs, but the family are American/German, so in their household they use clothespins. Or possibly clothes pins. I'm not sure if it's one word or two)

After a couple of hours, we had a cooked meal, and this amazing cake which Sheila decorated, with - at Katie's request - a pink monkey in a banana tree. 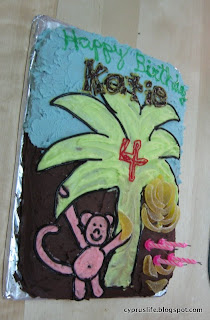 Despite being relatively quiet and peaceful, I had quite a headache by the time I left. Perhaps it was the heat. A peaceful afternoon at home, in the air conditioned study, left me feeling fine again which was just as well as we - with the guests mentioned in the previous post - went to the beach to meet Katie and her family again for an extension of the birthday party. Actually it should have been a cell group gathering, but none of the others could make it. 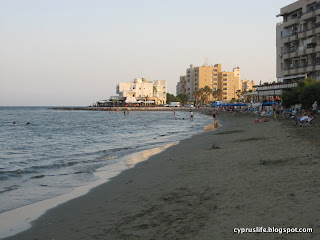 The beach is very pleasant in the evenings, even after a hot day, and while the sea temperature is like a lukewarm bath, it's surprisingly refreshing going for a swim and then eating a picnic on the sand.
Posted by Sue at 17:16