We don't eat at restaurants very often. Perhaps once a month, or so. Of that, we probably only actually pay for meals at restaurants about two or three times per year... on our anniversary, and possibly a birthday, or some time around Christmas. Our other occasions eating out are when visitors decide to treat us.

And while we have enjoyed occasional meals at a local taverna, the Art Cafe, a Mexican place along the Dhekelia Road, and one or two other restaurants around Larnaka, our choice more often than not falls on Alexander's, on Larnaka sea-front. It doesn't look particularly posh; the menus are a bit untidy; indeed, at first glance there's nothing obvious to distinguish it from the many other sea-front eateries. 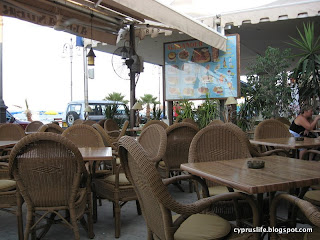 But we went there on the recommendation of friends some years ago, and find ourselves returning, again and again. Why? Well, it's friendly. The service is excellent - almost too fast sometimes. The prices are reasonable. The choice is large, including the best vegetarian selection we have seen in Cyprus. The food is hot and tastes good, and the portions are enormous. Oh, and they usually offer something 'on the house' when we have almost finished and are pondering whether or not to have coffee.

Oh, and they do the most amazing ice creams.

Last Sunday was our 29th anniversary. We decided to go to Alexanders so we could look out over the sea, and so that we weren't too far from the airport, since some old friends were coming to stay that evening, to be met around 8.30pm. We decided not to have desserts, but cold decaffeinated frappes instead. They were extremely good... and we were then offered 'on the house' small dishes of ice cream, which we accepted and enjoyed.

Our visiting friends wanted to take us out for a meal last night. Brian and Ruth are vegetarians, and liked the idea of being by the sea-front. So once again we opted for Alexanders. 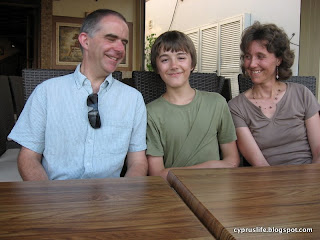 I had the excellent veggie moussaka, Richard had pork souvlaki. Brian had an omelette, Ruth (who eats fish) had the snapper. Their teenage son Oli had a large pizza. All very good indeed.

Then four of us decided to have desserts. Oli had the banana split:

Richard and I had no hesitation - after prior experience - in ordering Negrita ice cream sundaes: 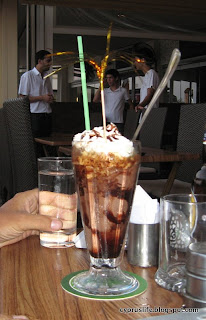 ... and the final choice was banana crepes for Brian:

All very tasty, and an enjoyable evening out.

The one problem with restaurants in Cyprus is that so many people smoke. We always try and get there by about 6.30pm since most Cypriots don't eat until at least 8pm. But there are always some smokers around, unfortunately. Inside Alexanders is non-smoking, but who wants to eat inside when one can look out over the sea, in the relative cool of the evening?

So we left by about 9pm, after two people opted for de-caff frappes 'on the house', and walked down to the marina and back in the hope of walking off at least a few of our excess calories...
Posted by Sue at 14:44

We frove for the first time in Cyprus last year and on the say befoire the car went back we nipped accross to Limassol. Unfortunately it was a stormy day. In between a couple of very heavy showers we made it to the sea front.

We wandered upo and down and finally settled on Alexanders for a bite to eat. I can echo your compliments of the place. The staff we friendly and even suffered my attempts to order in Greek. The choice was good and our portions were generous.

We are ibtending to have a car for far longer this year and will head to Larnaca for more of a look around and aim to eat again at Alexander's. Having a sweet tooth I will definitely be investigating the sundaes.

Oops, I was typing in a dark room, (thinking I could manage without putting the light on); obviously, from the spellings in my previous comments, I was wrong.

Hope you had a happy anniversary. 29 years, you are on a good start!!
May 17, 09 marked our 64th year together and I must say we are still in love and still spend our time together as much as possible.

I do wish for you the same.
Betty G