A week of board games

If the previous week was a week of beaches around Larnaka, I think this past week would have to be categorised as a week of board games.

Yes, if you thought that board games were just for small children, you are mistaken! I grew up in a family that enjoyed games at weekends ... mah-jong being a favourite, with the occasional Scrabble, and a few card games such as Canasta. As adults, we continued playing games together when we gathered. And, naturally, we introduced our sons to games at a fairly early age, continuing into the teenage years. Rummikub was probably our family favourite.

In the past few years we have got together, a few times, with friends who enjoy Scrabble evenings. My strategy has improved significantly; I'm not particularly competitive, but enjoy the challenge of getting the best possible score out of my hand, whatever it happens to be. Playing online at Facebook has also helped, of course!

But it's only in the past four months or so that we've started to enjoy playing Settlers of Catan, which seems to be quite a 'cult' game in various parts of the world. We heard, only yesterday, of people who play it avidly in Egypt. We first came across it when Daniel introduced us to it, on the Doulos. Tim has a set, and plays with friends in Birmingham. And we now play with Jorn and Sheila, new friends who live just a few minutes' walk away.

Last Sunday, we had a Settlers evening. We finished the first game by about 9.45, and - for the first time - decided to play a second. Possibly a mistake, since I'm not a night owl (and, indeed, I was extremely tired on Monday). To our surprise, Richard won that second game; his first win in Settlers. There's some luck in the opening placement order, and more in the throw of the dice, but there's also a lot of strategy. Evidently we are improving.

On Monday afternoon, I went over to the same friends to play Risk with the three older children and Sheila. I'm not a huge fan of Risk, although I can remember playing it late in the evening with friends when we were in our twenties. I don't really like the idea of world domination... and everyone seemed to find it amusing that I apologised when I took over someone's country in the game.

Risk is mostly luck, and I was very lucky in my initial cards, which gave me most of Africa, and other countries nearby. I was also lucky in that siblings like to attack each other, and mostly left me alone... so that within about an hour, only two of us remained in the game. I was much stronger, so would probably have won, but couldn't face the thought of another half hour or more of dice-throwing and gradually taking over the world, so I suggested we declare a draw.

On Thursday evening,we went for another round of Settlers. Yes, that's twice in one week! But the evenings in Cyprus summers are hot and humid, so we don't want to go for a walk or do anything else energetic. We don't watch TV, and I can't manage watching more than about one DVD per week, at most. Sitting at our separate computers is fine sometimes, but we don't want to do that every evening, so an evening out with friends playing a game is a great way to socialise without being too active.

To my utter amazement, I won the game. I was so surprised, I took a photo of the final board: 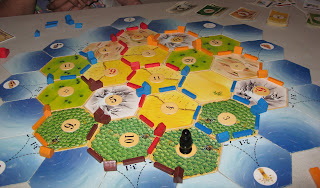 My pieces were the orange ones. I had five settlements, two cities, the longest street, and an extra point from a development card. It was a very strange layout, with resources grouped together mostly. I remembered a hint I'd read, to ensure some clay... and as I was the first to play (by lucky throw of the dice) I did exactly that. Evidently a good hint.

Then last night, some other new friends decided to hold a games evening, with seven adults and six older children. We chatted for the first part of the evening, then got organised into two games of Rummikub, and one of Scrabble. I played Scrabble, and managed to win by a few points... it was a good game, and again I was lucky with my tiles. As well as having had a lot more practice than the others playing with me!

We didn't leave until about 9.45pm, by which time our hosts' youngest child had dozed off on the floor with their dog.... 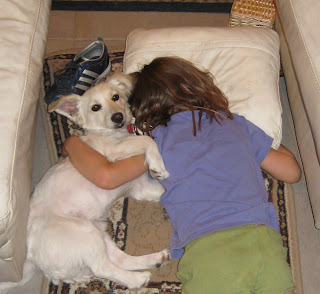 chessboss.com is currently in the progress of choosing chess blogs/clubs to receive recognition from chessboss.com as Top Resources. This award is not meant to be anything other than a recognition that your blog/Clubs gives information about board games and their tactics that directly or in directly raise chess awareness. Simply place the award banner code on your site and your resource will be listed as a Top CHESS Resources on chessboss.com once you place it. chessboss.com is a Private Global Chess Server which offer FREE Chess Games and Guidelines for learning chess and whose goal is to promote Chess (which game has lost his fan base) through the spread of information globally. Thank you for your dedication to your Club/blogs. Please reply me back with the subject line as your URL to avoid spam and to make sure that you only get the award banner.