It's nearly twelve years since we moved to Cyprus. And while we haven't exactly explored the island widely, we thought we knew Larnaka reasonably well. Or, at least, the available beaches.

Apparently not. The local informal group of home educators has decided to meet every Wednesday evening during July and August for a beach get-together. We gather around 5pm, armed with swim-suits, towels, picnics, spades, beach games and whatever else anyone wishes to bring. We swim, or dig, or just hang out and chat. The children do their own thing, and then - when we start to feel hungry - out come the various styles of picnic, mostly salads and/or sandwiches.

Each week, a different family chooses a beach. And so far, two of three have been new to us. Last week we went to one of the Pervolia beaches, and this week another, slightly closer to Larnaka. I had actually been, a couple of weeks before, with friends - but Richard had never seen this one before. It had both sand and stones, and - of course - warm water which was pretty shallow for a long way out.

So we swam a little, and chatted, and ate, and enjoyed the relative cool, fresh feeling of being by the sea. I forgot to take any photos until the end, when we had packed up and were leaving, around 8.15 pm as the sun was setting: 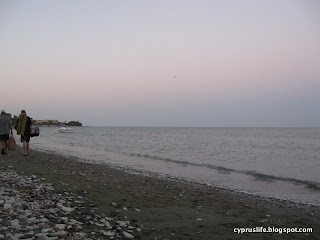 By the time we'd packed the cars and said our goodbyes, only about ten minutes later, the sun had almost gone: 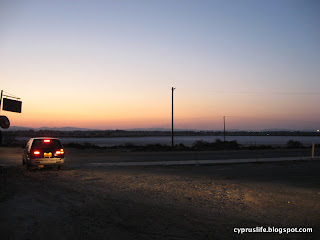 .. and I took a final photo, looking towards the lights of Larnaka: 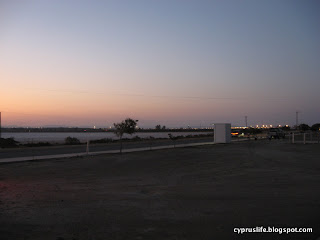 Thanks , always glad of beach suggestions - we have generally stuck with the one just across from where we stay in Limassol but hope to get around a bit more this year.

We're beginning to thinkmore about the trip as September gets closer and your posts help.

Cyprus is a Beautiful Country.

I found this web site to know more about Cyprus. I hope it will help you.