A tale of three blenders

When we first came to Cyprus, we probably had a second-hand blender (or liquidiser. One word was originally British, the other American, but I've entirely forgotten which is which. We use the words interchangeably) from the Thrift Store. I really don't remember. Such details have vanished in the mists of time. Possibly we didn't have one at all.

I do remember, however, that we acquired a nice Moulinex liquidiser (or blender) at some point during 2003, or thereabouts. We didn't pay much for it. Perhaps we didn't pay anything for it. As far as I recall, it was on special offer at Orphanides supermarket, but whether it was free with so many bonus points, or on discount, or simply a special offer is another of those minor details which has vanished from my mind. 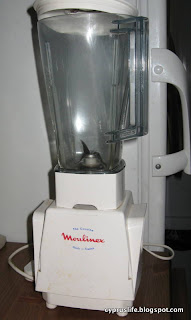 It was a good liquidiser. The boys used it to make fruity milk shakes in the summer, and I used it to make breadcrumbs. We thought about making soup, too, and blending that, although in our old rental house we didn't get around to that kind of cooking very often. It was a most uninspiring kitchen.

And while it was a good blender, it slightly worried me that the lid did not lock. I hoped nobody would be stupid enough to have fingers inside when it was working, but it was entirely possible to switch it on full power with the lid not on firmly enough, and have the contents fly everywhere. That didn't happen, thankfully. But it could have.

Then, early in 2004, after much contemplation, we acquired a Moulinex Ovatio duo 3 food processor. From the thrift store, inexpensively, in excellent condition. It came with a liquidizer (or blender) attachment, which sat above the motor. It was as powerful as the blender we already had, but safer because it only worked if the lid was locked in place. 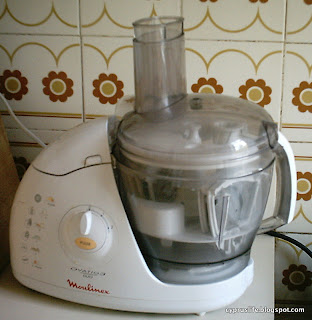 That was a photo taken in the kitchen of our old rental house. The small amount of tile showing in the background might give a clue as to why the kitchen was so very uninspiring to work in. It was also taken on our very first digital camera, which wasn't very good resolution, which is why the photo is rather grainy.

In the interests of saving workspace, we packed away the first blender. It sat in the cupboard for about a year, and then was moved to the office. Someone staying there wanted to use a blender... and was very pleased with it. It moved from the office to the office guest flat a while later, and there it stayed...

..until, in (I think) 2006, the Ovatio 3 food processor breathed its last. The motor became noisier, and less powerful, possibly because we made bread dough in the food processor and it wasn't quite strong enough. Or maybe it was older than we thought when we first bought it. Whatever the reason, the Ovatio duo 3 was no more.

So, not expecting much, we went to the Thrift Store again. And there, to my amazement, was another Moulinex Ovatio duo food processor! It looked almost new (though it evidently wasn't). It was a bit smaller, but it had extra attachments, such as a fruit juicer. And the liquidizer (or blender) had an extra white attachment that sat on the same base as the main processor bowl. It was an Ovatio duo 2 rather than 3... but I didn't think that would matter. The price was good, so we bought it. 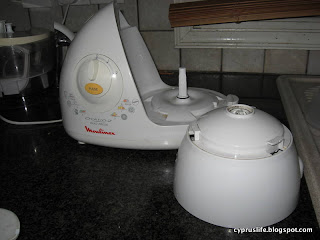 Possibly it was a mistake. The bowl was too small for bread dough, and it didn't work so well for pastry. Worst of all, the blender really wasn't powerful enough for anything much. On the rare occasions I made soup, it ended up with too many lumps.

But we didn't make soup very often, and it worked for milky fruit shakes... except that by then Daniel had left home, and Tim soon after discovered that dairy products made him go deaf, so he stopped making milk shakes.

We moved house in the summer of 2006. And the kitchen is so nice, both Tim and I felt inspired to do a lot more cooking. So, in the winter, when we didn't much like our lumpy soups, we had the brilliant idea of rescuing the Moulinex liquidiser from the office guest flat , where it hadn't been used for some months.

And, for the past two and a half years, we've used that blender a fair amount. In the winter, I make soup at least once a week and freeze several portions. In the summer, we make fruit smoothies with peaches or apricots, and soft fruit (frozen). And ice cubes.

Possibly I added too many ice cubes a couple of days ago. Maybe I added them too early. Or maybe the liquidiser had simply come to the end of its natural life. These days, six years old is pretty good for kitchen gadgets, or so it seems. Anyway, it started to make a loud graunching kind of noise, and felt as if it were not quite balanced. When I poured the smoothie into glasses, I noticed a piece of metal (fortunately still whole). And the inside of the liquidiser, after being washed, looked like this: 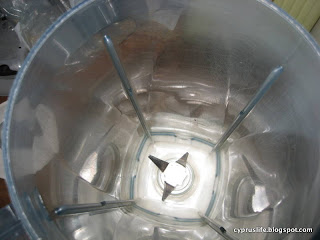 Note the absence of one of the metal pointy bits. It had broken off completely. It's clearly not mendable. I did wonder if it might work anyway - if the loud noise was due to the broken bit in the machine - but when I made yesterday's smoothies, there was still a horrible noise, and despite leaving it on for longer than usual, they weren't very smooth. They were more like lumpies. Still tasty, but not what we've come to expect.

We did think about going to Orphanides last night to see if they had any more special offers on blenders. But couldn't remember what time it closed. And I knew I wanted to go to Metro today anyway, to do a bit of regular shopping. Some very important items, such as Weetabix and almond milk, since Tim will be arriving back in Cyprus for a few weeks on Sunday evening.

Unfortunately the only blender in Metro was a 'super-power' one, at 80 euros. Ouch! We're not going to pay that much for a liquidiser. And then I remembered the other part of the food processor. Did I even have all the parts?

The food processor part was on the work surface - I do use that occasionally. The container part of the liquidiser was in a cupboard. And the white part which it perches on was in another cupboard... and it all went together to make a working blender: 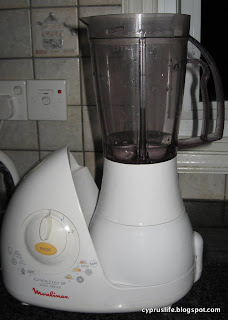 I even had the lid, although it's not shown in the picture.

So I made our smoothies. It worked without making much noise.. but the result wasn't much different from yesterday's attempt. Roughies rather than smoothies. Too many bits. It will do for a few days, but we have to get to Orphanides early next week to try to find something better. Or one of the electrical shops. Or possibly even the Thirft shop.

We can't go tomorrow, however, since tomorrow is a one of the big religious public holidays in Cyprus. I'm glad I remembered that, as we were thinking of doing our shopping at Metro tomorrow rather than today... but thankfully remembered in time.
Posted by Sue at 21:05

Hi Sue
We are coming over to Cyprus in a couple of weeks. Can you tell me where the thrift shop is please. Is it in Larnaca ? never seen one there.

The main thrift shop is on 1st April Street. There's a new 'family thrift store' opened in the last few months, too, on the outskirts of the town centre.

I know it as a blender, liquiFIer, or food processor--never heard liquidiser before!

Thanks Sue
I will try and track them down. We have a house near Kamares and often need little bits and pieces and I sometimes think they don't need to be brand new for the small amount of use they get, as we don't manage to get over as much as we would like. Although IKEA is great for inexpensive things, I wish they would open a store in Larnaca.
Thanks again
Lesley