August rushes by in Cyprus

Due to the surprising popularity of my 'photo clues' in a post a couple of weeks ago, I offer another guided tour of selected parts of our house, with a different set of clues to a considerably more pleasant event.

Let me take you first into our dining room where, in a biscuit tin which has set empty for some months, there are now some Bourbon biscuits... or Bourbon clones, anyway. No dairy products in the ingredients. 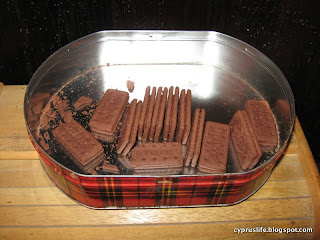 Moving into the kitchen, and a rare glimpse inside the cereal cabinet: on the right, my usual muesli. Next to it, two items that have not been in the house since April: almond milk, and a large box of Weetabix: 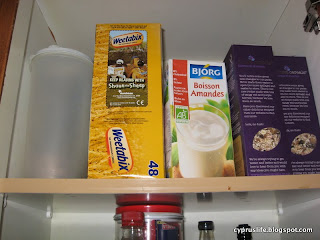 If I quickly open the fridge (not too long, since the weather is still very warm in Cyprus) you might notice another package of almond milk, some pineapple juice, and a partly-empty bottle of home-made lemonade: 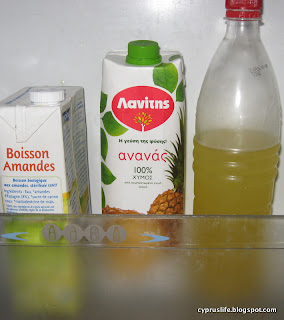 On the other side of the kitchen, the cupboard with walnuts, almonds, sunflower seeds and so on has an extra addition: a jar of salted cashews:

Back to the dining room, and a clue that would confuse the issue for a lot of people: an almost complete set of Chalet School books by Elinor M Brent-Dyer nestling in our fiction shelves between the Binchys and the Boyds on one side, the Brontës and the Browns on the other: 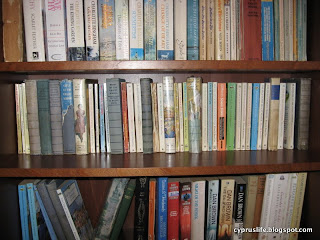 Now into the living room, where, in front of the television, is a DVD with the last four episodes of the final season of 'Quantum Leap': 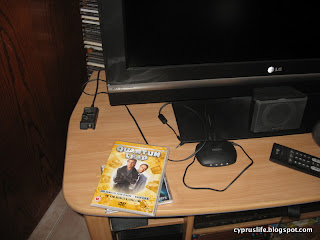 And the digital piano, which has lain quiet and uncluttered since April, now has various pieces of music on it, not to mention an empty glass: 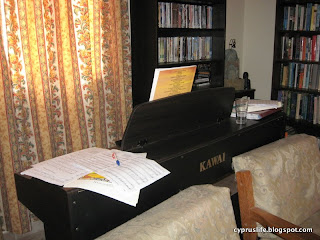 Those who knows us well will, of course, realise that all this means that our younger son Tim is home, after completing his first year at Newman University in the UK. We have missed him enormously, and yet in some senses the time seems to have raced by.

Why all the extra items around the house?

Well, we don't usually bother with biscuits when Tim isn't here. There is generally an unopened packet or two in the cupboard, either given as a gift or bought on special offer. But we don't get around to opening them unless we have visitors. The same is true of pineapple juice. I usually have at least one carton in the cupboard, but we're more likely to open an orange or apple juice if we feel like packet juice. I mostly drink water anyway. And squeeze fresh juice every morning. As for salted cashews, they're very moreish and we all like them. But we really don't need the extra calories so I don't usually buy them.

Neither of us eats Weetabix or uses almond milk, but as Tim is dairy-free, that's his regular breakfast. And while I do make lemonade during the winter and spring, lemons are not in season now, so I hadn't made any for a couple of months. But last Friday I saw some quite nice looking lemons, imported from Argentina. They were rather more expensive than Cyprus lemons, and I don't usually buy fruit from so far away... but in Tim's honour, I did make one batch. About three and a half litres. Richard enjoys it too... but I continue to drink mostly water.

The music on the piano is self-explanatory. Tim is our pianist, and chose this digital piano about six months after we moved to this house. Yesterday afternoon he had several of his youth group friends over to try out music for the youth group variety night on Saturday evening. The empty glass was probably left by one of them... I found several glasses and an empty water jug on the table after they had left. Teenagers in Cyprus seem to drink a lot of water.

Quantum Leap? I used to love the series when it was on television, many years ago. When it was closed down, I stopped watching TV altogether. There wasn't anything else that interested me. So I was very pleased when I discovered that Quantum Leap was available on DVD. Over a few years, I bought or was given the five series that were broadcast. Before Tim went away, we watched one or two episodes most weeks as a family.

When he left, we had most of series four and all of series five left to watch. We did see most of them. But decided to leave the last three for Tim's return. We forgot all about them at Easter, but on Monday evening this week, we decided to watch one of them. Leaving the DVD out should - we hope - remind us to see the others too while he's here.

Oh, and the Chalet School books.

I've been reading that series since I was a teenager. I had about thirty of them mostly in paperback, which I had collected from charity shops in the UK. Two of my friends here (one aged 11, the other 70...) borrow them regularly. My mother had the whole series in the UK, with a fair number in hardback. When she moved to her current house, she asked if I would like them. But since there was no way of getting them here, they went temporarily to my sister's house, where they sat in a box in her guest room for a few years. And we kept forgetting about them.

Finally we arranged for my sister to take them to my mother's house, where Tim lives in the UK. I asked Tim if he would bring three or four of the earlier ones which I didn't have... and somehow he managed to fit about thirty of them in his case. Tim has also read the series many times, and - to my amazement - managed to remember which ones we had, and to bring all the others. Plus a couple in hardback which we only had in paperback.

I shall probably re-read them in the next few years, and I'm sure my two local friends will too.

As for Tim: he arrived - earlier than scheduled! - on Sunday evening. On Monday, he slept late, played 'Risk' in the afternoon with the children of some local friends. In the evening we watched the QL episode mentioned above. On Tuesday, he relaxed and read most of the day, and we went to play Settlers of Catan with local friends in the evening. Yesterday he went to visit the local inter-church holiday club for an hour or so in the morning, then worked on music, and had his friends over in the afternoon. Then while Richard and I went to the beach to meet the Cyprus home educators' group, Tim went to a leaders' meeting to plan for next week's youth group camp in Troodos.

So three days have raced past. Today we have nothing planned; Tim is reading and doing things on his computer: 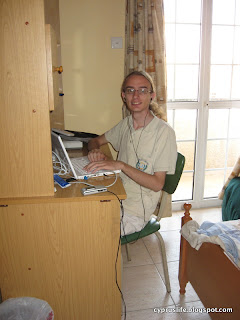 It's such fun to picture all of you and live in Cyprus vicariously.....virturally? Hope last nights show went well and it raised lots of money for the youth group. Enjoy your time with Tim. Tell him hello for us.