You might be forgiven for thinking this blog has been neglected of late. Someone once said that time goes by faster as you get older, and that does seem to be the case. I really don't know where August has gone.. and with the heat and humidity of Cyprus during the summer, it's surprising that it hasn't dragged past.

It helped that some old friends have just been out to stay. Chris was Richard's closest friend at secondary school, so they go back a very long way. We missed his wedding to Judith, because it happened a couple of days after Daniel was born (three weeks earlier than he was expected) - I don't think we're entirely forgiven, even twenty-three years later! Their older daughter is now at Oxford university, their younger daughter about to start GCSE courses. Time flies over the years, as well as the months.

Below are a few photos from the last ten days or so. We were delighted that our friends had space in their luggage to bring out some board games which we've enjoyed playing in the last few months with other friends. Tim was away at the inter-church youth group camp when they arrived, but it didn't take us long to introduce our friends to Settlers of Catan: 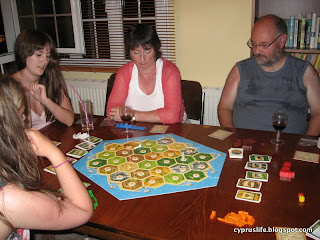 They rented a car for a few days, and went out and about. So on Wednesday evening we went to our usual Summer beach get-together with some of the home educating families around Cyprus. My small friend Helen is becoming more and more adventurous. She decided that rather than hanging out with the adults, she would go and play with some of the children... and got extremely sandy: 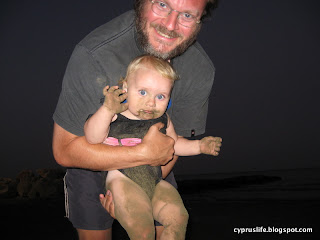 On Friday evening, Tim got back from camp having had a wonderful time, and on Saturday evening our friends took us all out to a local restaurant that does an excellent mese (or meze, or possibly even mezze) - a Cypriot speciality where smallish portions of a large number of dishes are brought, a few at a time, to the table for all to share. One would have to have a very large appetite to eat a whole mese, so we ordered mese for five, and that was more than sufficient for eight of us.

Here are the younger members of the group: .. and here are the Aged Parents: 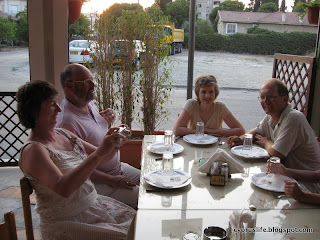 Once the food started arriving, I forgot about taking any more photos.

On Sunday afternoon we played another game of Settlers of Catan: 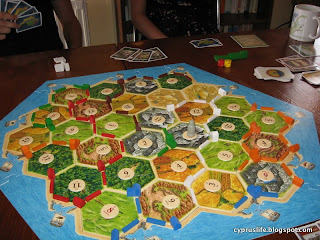 Tim and I formed a team (since seven of us wanted to play, and six is the maximum number of players) and we won by quite a few points. We were orange.

Our friends also brought out a Carasonne game for us, and we introduced them to that later. Then on Monday evening, after they had left, Richard, Tim and I played a three-person version, using the expansion we had also bought: 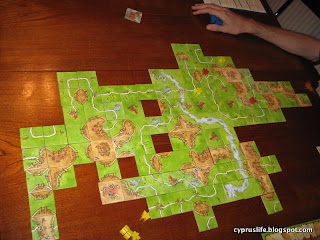 Tim's time with us is going by rapidly. He's mostly trying to relax this week. 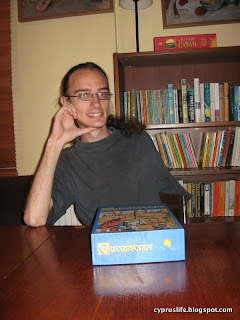 Does this mean that our lives are filled with friends, meals out, games and beach evenings? It probably looks that way from posts like this. But then, those are the most interesting things to photograph. Although August is a holiday month, with many businesses closed down for two weeks or more, Richard has continued working more hours than he should in the office, as well as giving sailing lessons to some young friends.

And me? I admit I've spent too much time on Facebook. I've also been working on our family website (http://rsdt.org) which was on Geocities until recently. Geocities is closing at the end of October, so Richard moved it to one of his servers, and I've been spending time changing the design using CSS to make it simpler. The process of converting is not so simple, however!

I've also taken the opportunity to publish, for the first time, some of the journals I kept about our home education journey - on the family website rather than my home education site (http://home-ed.info) since they're about us personally rather than general. There are still many more pages to convert, and some more to write.

I also usually spend two or three hours each morning doing housework, shopping, laundry, and so on. In the heat and humidity of Cyprus summers, it all takes a great deal longer than it does during the winter. We don't tend to use the air conditioning other than in a room with a computer, and for a few hours overnight in the bedroom, which is why it's a great temptation to spend far too long at the computer, in the relative cool of 28C.

In another week, we will all fly to the UK - Tim to return to his university, and us to do the usual rushing around seeing people that we do, roughly annually. We return to Cyprus at the end of September, when I hope the weather will be feeling a little more Autumnal.
Posted by Sue at 15:04