Out of Cyprus, day two

We flew out of Cyprus on Monarch Airlines, for the first time. Theoretically a budget airline, we chose it because the dates and airports were most convenient. By the time one has paid for the seats, and the luggage, they're no cheaper than Cyprus Air. But several friends have used them this year, so we thought we'd try them. No meals are provided, but with a flight leaving Cyprus at 9.40pm, that wasn't a problem. Indeed, it's something of an advantage not to be woken up for aeroplane food, when trying to get some sleep.

The flight was smooth, and landed half an hour early - as many Monarch flights seem to - although the descent was sharp enough that I ended up with bad earache. Our luggage came through fairly quickly, and we were able to get a taxi to my mother's house. The driver evidently had a sat-nav unit, since his route was the best one we've seen from a taxi, and the fare lower too.

Yesterday was - a little to our surprise - bright and sunny. About 20C, I suppose. A lot less than it has been in Cyprus, but nice not to have any humidity. Besides which, I like getting back to jeans and trainers after three or four months in shorts and flip-flops.

Shortly before we left, when I was going to close my computer down, Tim came in with his memory stick and said he was going to save my Firefox settings. I wasn't entirely sure why, but yesterday he arrived in the bedroom where Richard and I are sleeping, carrying a large Apple computer - it looked huge compared to my tiny Mac Mini. 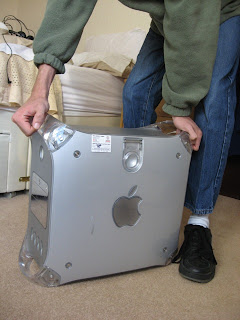 This computer, in keeping with our Old Testament name theme, is called Solomon. Tim bought it on Ebay a while ago, when his old notebook computer was getting unreliable, before he finally decided to buy a new one. He's planning on selling it again, but said he would leave it until we're about to go, so that I can use it while we're here. He brought down his rather nice flat screen, too: 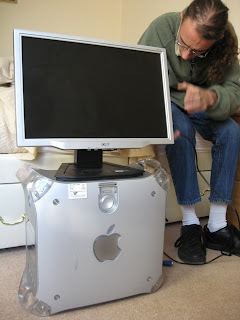 We found a suitable corner of the room to set it up, and he then imported my Firefox settings. So when I switch on, it looks very like my Mac mini back home in Cyprus. Except for having a wide screen, and no photo of Daniel and Tim on the background... 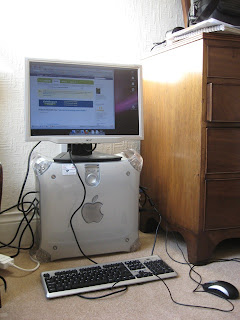 So I was able to read my email, reply to a few, update Facebook, and one or two other things. It's not exactly the most comfortable of locations, sitting on the floor, but very nice to have this facility to myself.

A few minutes ago I was feeling uncomfortable again, wondering if there was some way I could raise the keyboard off the floor. My eye landed (not, of course, literally) on my carry-on luggage, which was sitting by the window. The perfect height. A box and Richard's notebook cover provide a mouse stand and pad... and I'm all set up: 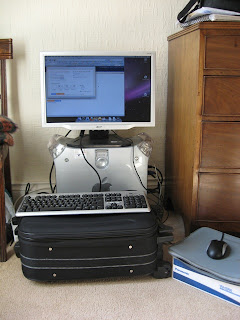 Yesterday morning Richard and Tim walked - in the sunshine - to the friends who are kindly lending us their second car for the next fortnight, chatted awhile, then drove it back. In the afternoon, we all went to Kings Heath, the nearest biggish shopping centre. We could have walked, but were all fairly tired, so we drove. It's looking a bit run-down since we were last there. Woolworths, which closed earlier in the year, has turned into a Poundland, with a Clarks shoe shop as part of the old building. Holland and Barrett have moved to a move useful location, but with a much smaller shop - and thus less stock.

We popped into the Abbey, too, and asked if we could order a card for me to use for online banking. Much easier than attempting to do so on the phone, as we've done before. I do like the way the Abbey is so customer-friendly. No queues, any more; instead one takes a little ticket, and then sits down on the very comfortable red sets, awaiting a call to the cashiers. I was also impressed to notice, in one of the little private screened booths, one of the staff moving the screens so that one of the customers could feed her fractious and hungry small child.

We looked in several charity shops too, but none of the books leapt out and said 'buy me!'. My to-be-read shelf back in Cyprus is still bulging, and I'm beginning to think we've almost reached saturation point. Well, not quite. I still have books on my wishlist, and we have a few more Chalet School books to take back to Cyprus - mostly hardback editions which we only have in paperback.

We did, however, manage to buy a new egg-slice (much needed) for the huge sum of 69p, and in Poundland we found more liner sheets for cooking (for a pound), and some shampoo (which I forgot to bring - also for a pound). Oh, and a large selection of birthday cards for various family and friends over the next year. They are MUCH better value in England than in Cyprus.
Posted by Sue at 15:40

Was wondering how you were keeping up on FB. Great setup. Enjoy your time at home with your family.