The reason we flew to Birmingham last week was that Tim was singing, with the Bournville Young Singers (formerly Bournville Children's Choir) in a couple of concerts in Birmingham ArtsFest. Otherwise, he might have stayed a bit longer in Cyprus.

So on Saturday, we dropped him - in our borrowed car - at the Friends' Meeting House, for a rehearsal, then drove into Town. Parking was easy enough near the Post Box (we even remembered to go a little way down the hill, near the Registry Office, where we could park for four hours at 2.50 rather than two hours at 5 pounds!).

Birmingham City Centre is looking much smarter than it used to, since the renovations in recent years. It was fairly crowded, too, but not overly so at 10am. We looked in a few shop windows, including one specialist board games shop, where we saw our favourite games in the window.

The most important thing to do was to buy our train ticket, to get down to Sussex on the 24th. Previous attempts at doing buy train tickets on-line have not worked, but leaving it to the last minute is also not a good idea, since prices soar within a week of travelling.

The girl in the information centre was very helpful, and the price was extremely good, although Richard is puzzled as to how the route works. I'm sure we'll figure that out nearer the time.

Next stop - after browsing several other places nearby - was Primark, a large and inexpensive clothes shop that we usually visit when in Birmingham. We needed a few more shirts and one or two other things, and ended up with a little more than we intended, since I really like the turquoise that seems to be one of this year's Autumn colours.

By this time it was nearly 11.30, so we wandered back to the location of the first concert (due to start at noon), looking for somewhere to have coffee. We were pleased to see a Costa coffee place inside Waterstones, just around the corner from the Pallisades ramp, right next to the concert location. So we popped in there for some cappuccinos, and a chance to sit down. 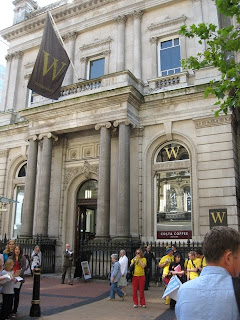 We went outside again just before twelve, and saw the choir assembling. Richard got out the video camera, and then we were delighted to see some old friends who stopped by to say hello.

The choir did well, amidst traffic noises, with a fair audience gathered around by the end. 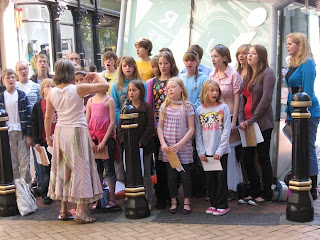 They then hurried off to their second location, while we decided to have a sandwich, and sit down again for twenty minutes. We found a Pret a Manger restaurant which had organic, additive-free sandwiches at surprisingly reasonable prices, and bought a slightly odd rhubarb drink. The food was extremely good.

Then we went down the pedestrianised New Street (very different from how it used to be): 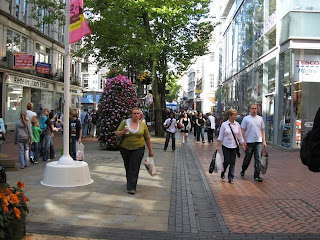 The sky was still blue. This is one of the old council buildings - the museum, perhaps? I never know which is which - contrasting with the ArtsFest booths (in white) and a modern looking stage (in black). 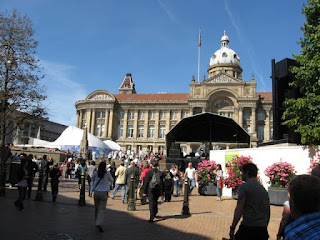 Then I had to take a picture of the Central Library. When we first moved to Cyprus, I missed the libraries so much. Tim has made good use of them since living in Birmingham, and visits the huge Central Library about once a month as well as using the local library, and, of course, his university one. 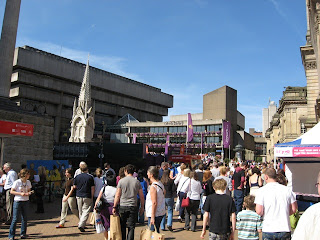 We had thought the second Bournville Young Singers concert would be outside, but eventually found them inside the library plaza (which I believe is called Paradise Place now): 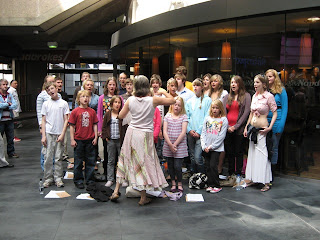 Again, they did very well, despite one of the girls being overcome by the heat part-way through. Richard left me to go and pay for some more parking time for the car, since our four hours were nearly through, which meant I had the video camera. About two-thirds of the way through the concert, the battery - which we hadn't fully charged - gave up. And Richard had the spare one with him.

So I whipped out the still camera, and took two minutes of the barbershop group on the video setting, until the disc space ran out. We later realised we had left the main video camera lead in Cyprus, so the only one we've been able to upload so far is this brief section of the barbershop song.

I've never before embedded a video in a blog post, but will see if I can do so:

It wasn't until a few hours later that I realised that the song they are singing - some tavern song, apparently - is the same tune as 'Heads, Shoulders, Knees and Toes'!

After the concert we went out into the sunshine again: 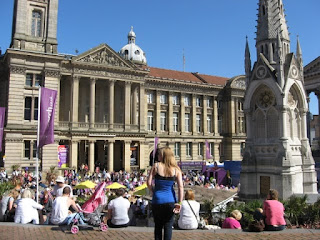 But had no problems resisting the lure of the Monarch-sponsored 'beach' set up right outside the library: 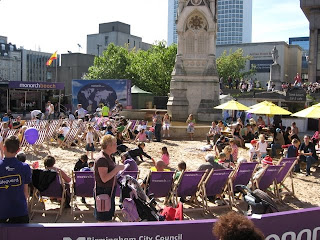 Tim wanted to buy his student bus pass for the next year, so we went to the appropriate place. Unfortunately he discovered that he didn't have all the necessary paperwork, so that was no good. We then went into the Apple Mac shop, in a different mall, so Richard and Tim could look at the various computers and other technology for a while.

We had a brief look into several of the ArtsFest booths as we wandered around, and stopped for a while to watch some break-dancing, and an act with someone made up to look like a statue. There was a lot going on, but we didn't go deliberately to any other events. We had a programme, but it wasn't exactly easy to follow!

We finally got back, pretty tired, about 5pm. I took out all our Primark purchases: 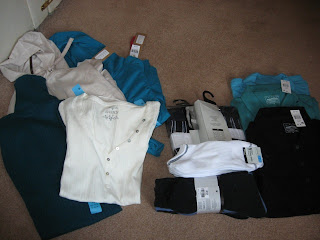 Not bad for about 33 pounds. This lot would have been a LOT more expensive in Cyprus.
Posted by Sue at 13:23

The old building that you are unsure about, is the council house. Office of the local government and mayor. The museum is to the left of that building as you look at it. You can see the museum in your 7th photo ( first one after the video)

Glad you are having a good time. Praying the Lord's riches blessings on your visit here. Enjoy :-)
Paula

I have fond memories of the great library from years ago. My wife was on a dental conference and i tagged along. When I caught up with her in the evening she said "So where did you get to, see anything interesting?" I said Yes the library and she looked at me and said, "And?" Just the library I said.

It had racks for magazines that were longer than the whole library at home - it was the first full scale library I had encountered. Excellent day out that.

G|lad to see you are enjoying your trip. Thanks for sharing on the blog.

Hey i have a twitter name of cyprusbritguy love 2 hear from anyone on anything to do with Cyprus and any imput is great. it is a non commercial site and for fun and info. please send me any info
thnx