Bird of Paradise plants in Cyprus

I'd never heard of 'Bird of Paradise' plants until a little over three years ago, when we were shopping for ornamental plants for the little patio at the front of our guest flat.

A friend recommended this plant to us, saying the flowers were gorgeous - so we bought one. And dutifully watered it regularly, and re-potted it in the spring this year. It kept growing, but there was no sign of any flowers.

About a year ago, I did spot several blooming bird of paradise plants in a neighbour's front garden. I was a little embarrassed to admit that the only reason I recognised them so quickly was due to having used the 'Lil Green Patch' application on Facebook, which features Bird of Paradise plants!

I began to wonder if ours would ever produce a flower. To my surprise, when I popped out yesterday morning, I saw it: 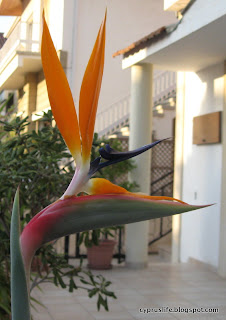 It really is a quite remarkable sight. I don't know how long it will last, of course, and assume there is only one bloom per plant.

Here it is again from the other direction: 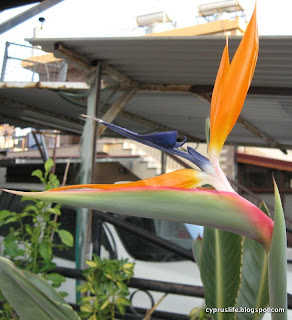 Apparently bird of paradise plants are also sometimes known as crane plants.
Posted by Sue at 12:58

Amazing things, aren't they? It looks as if it's about to fly away!

i feel very happy every time one of my fower blooms

We don't grow then in Kansas....middle America, although they are put in flower arrangements sometimes. they are usually pretty pricey but last quite awhile in comparison with cut flowers. Enjoy!

The first time I saw them was in Mexico, long before digital cameras, and I still took at least half a dozen photos because I was so in awe. Did you see the Bird of Paradise paintings by my host father from Costa Rica (Edgar Loaiza Granados), which he photographed for Facebook?

WOW! Incredible! That is one of the nicest things I have ever seen!

They take several years to flower, now yours has you will have many more blooms to enjoy. The flower should last a good few weeks.