Ups and downs of the last fortnight in Cyprus

It feels like a LONG time since we returned to Cyprus after being in the UK. I felt refreshed, and relaxed at first; happy that the weather was no longer humid, and a little cooler than it was when we departed. I was also pretty tired, but by the weekend was feeling ready to get into a new routine.

I spent a week working on our family website, which I moved from the almost defunct Geocities a few months previously. It still needs many of the pages updating to match the new theme, but instead I worked on the home education diary pages, which are new to the site; I'd made notes, and written down what we did at the time in messages, diaries and random documents, but had never turned it into something readable. I don't know how interesting it is to anyone else to read about our home education adventure, a month at a time, but it was fascinating to me to read how I felt, or what we did nine or ten years ago, and to see how my attitudes changed.

Then I caught some kind of cold or flu bug. I don't think it was from the UK, as it was about ten days after we got back to Cyprus. Perhaps I caught it from a child at Tots, the toddler group where I help on Tuesdays. I have no idea if it was the swine flu or just a really bad cold, but I felt fairly rotten for a few days. I didn't quite take to my bed, but I didn't do anything constructive. It left me feeling tired, and achey, and lethargic. It also left me with sinusitis, something I used to have about once a year, but haven't suffered for a while. Not as bad as a hacking cough, but exhausting nonetheless. I took echinacea/goldenseal, and mega-doses of Vitamin C, and plenty of garlic, and honey when my throat was hurting. I used Olbas Oil at night, but still didn't sleep very well.

Last Friday was Richard's birthday. He had a pile of presents to open: 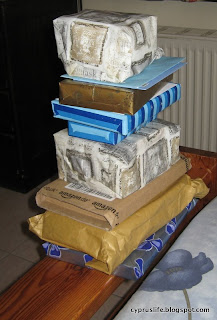 I made some chocolate cup-cakes for lunch, and a chocolate fudge cake for the evening, when we met with the cell group we are now part of, where we start with a meal. Someone else had made a very good carrot cake.

I did my usual activities when they didn't require much brain-power, but didn't do any work on websites or stories, other than updating my page on home education in the media, and writing a new one about how British home education is currently under threat, due to a recent government report.

In the meantime, the bird of paradise plant is still blooming: 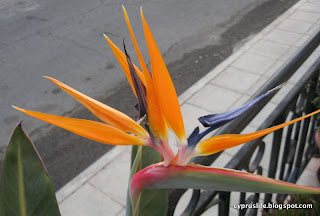 The bougainvillia, also in a pot, is doing quite well too: 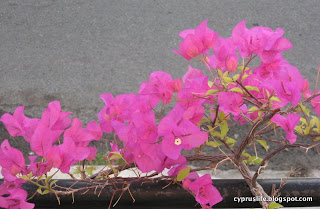 We've played several games of Settlers of Catan in evenings with some friends. They happened to mention that there are adjusted unofficial rules to enable only two people to play.

So I did some research, and discovered at least ten variations on the theme. I noted the similarities, and we've now come up with our own house-rules for the two-player game, playing to fifteen points. We tried it out, with Richard noting on his computer the variations we made as we played, adjusting once or twice as we realised what did and didn't work: 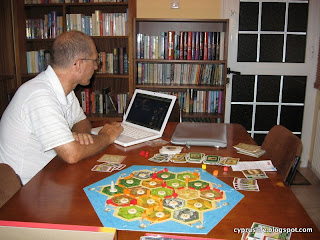 I won both games; the first time I was simply lucky; the second time he made a strategic error that we both realised in retrospect. Easy to do. 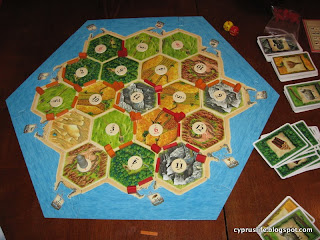 The weather has been much too hot for late October. It was a pleasant 28C when we got back from the UK just over three weeks ago, but has risen to 32C in the last week or so. It's even become somewhat humid again. We haven't used the air conditioning - it seems ridiculous to do so after the end of September! - other than one night recently, when we did switch it on in the bedroom for twenty minutes as we both felt so hot and sticky.

A few days ago, the forecast said it would break on Saturday, with rain for about five days. Yesterday, it said it would break on Monday. Now it's showing Tuesday. I do hope it rains soon; since we were in the UK (where it was dry for three weeks) when it rained heavily in Cyprus, we haven't seen more than a few spots of rain for about five months now.
Posted by Sue at 14:03