Out of Cyprus: Italian restaurant in Moseley

As I said in the previous post about my 50th birthday, we planned to go out to eat in the evening. Richard and me, our two sons, their girlfriends, and my mother. Since we had almost no idea what places were good value, good food and acceptable to everyone, and since Tim is the most organised of us all, he suggested a small Italian place on Woodbridge Road, easy walking distance for most of us.
Tim told us that the meals were pretty big, but we decided to have some large garlic breads as a starter. We had four of them, which looked huge - like enormous naan bread rather than standard garlic bread - but they were soon mostly eaten. Here's what was left after about ten minutes: 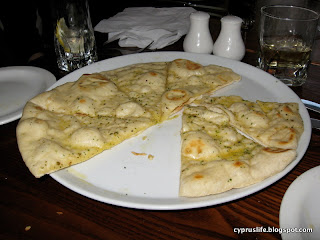 For the main course, Richard ordered a pizza. Which was, indeed, enormous: 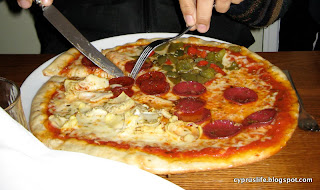 He couldn't manage it all, so Daniel (who is vegetarian) helped him out with some of the cheesy part.
Daniel and I both ordered spinach-filled tortellini in creamy tomato sauce. It didn't look all that big, and didn't come with anything else - perhaps we should have ordered a large salad between us - but was extremely filling: 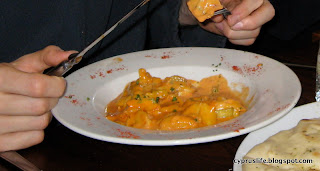 My other ordered monkfish, which came with a bit of salad and a lot of saute potatoes, which she shared with anyone who wanted them: 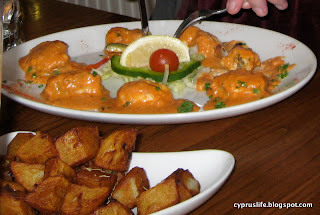 All in all, we thought it very good food. It's apparently a very popular restaurant but we had no problems booking a table for 7 the day before; when we arrived there was nobody else there. However by the time we left, shortly before 8pm, it was filling up rapidly and becoming quite noisy.
So we came back to my mother's house, and enjoyed a family game of Settlers of Catan.
Posted by Sue at 20:10