Tuesday was Becky's last evening with us before returning to the UK. She had never eaten a meze, which is probably the most 'traditional' of Cypriot meals. So we decided to treat her and Daniel to a meze meal at our favourite local taverna. A meze - pronoucned something like MEZZ-ay - is a meal where small portions of several different dishes are brought out, a few at a time, so that people can sample a wide range of local foods.

When we first arrived in Cyprus, we heard about 'fish mezes' and 'meat mezes' and neither sounded very appealing to me, since I'm not a big meat eater. It was only after some years when we were invited to various events including a meze that we realised that a regular meze contains salad and other vegetable dishes as well as the meat. And at the local one which we like so much, the emphasis is on a wide range of vegetable dishes, with meat coming almost as an afterthought, at the end.
Daniel, being a vegetarian, wasn't at all sure about having a meze, but we assured him that there would be plenty for him to eat.

We arrived about 6.45, which is long before most Cypriots eat, so we had the restaurant to ourselves. 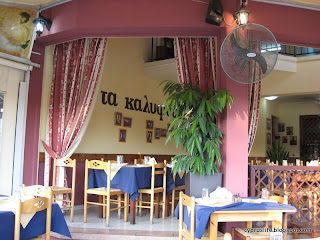 Almost as soon as we arrived, before we had even ordered, we were brought a standard appetiser, which I totally forgot to photograph. It was a plate of what looked almost like mini pizzas. The base was a kind of toast, and the topping was tomatoes with some feta cheese. It was delicious.

We were offered the menus, but had already decided on the basic meze. We also knew, from experience, that to order a four-person meze for four people would be extremely wasteful. The amount of food in this meal is huge. For four people with average appetites, one between two is more than enough. So we said we would like a two-person meze between the four of us, which is quite acceptable in Cyprus.

As soon as we had finished our appetiser, we were brought some halved Greek pittas in a dish, and this platter of dips - which I remembered to photograph after we had started it: 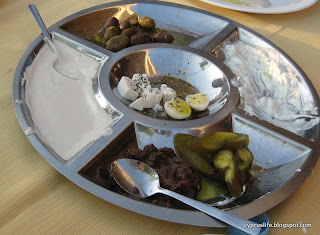 One of the white sections is 'tashi' - a Cypriot speciality which is basically tahini with some added olive oil and garlic. The other white section is tsatsiki - which is yogurt with grated cucumber and some mint (and, of course, garlic. Both are delcious, so I had some without any pittas, knowing that if I ate any bread I would be full before I started the main part of the meal.

At one end there were some olives, which I'm not so keen on, and at the other end some pickled gherkins (at least, I think that's what they are). 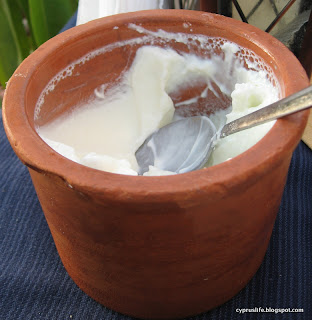 Oh, and they also brought us a pot of set Greek yogurt. Delicious!
A moment later two salads arrived. One was a standard Greek salad: 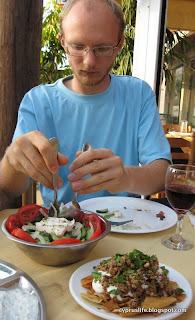 which Daniel is helping himself to in that picture. At the bottom right side of the photo is the first meat dish - a slightly spicy kind of mince, with some sour cream (or maybe yogurt) on something crackly. I'm not sure what. When we've been there before this was served on small taco pieces, but I wasn't so keen on this one
The other salad - which I also forgot to photograph - was a mixed set of leaves with some raw carrots and parsnips.
No sooner had we helped ourselves to salad and started to eat than the next dishes arrived. We were so keen to try them that, once again, I forgot to get my camera out until we had helped ourselves. The one on the right of the picture is halloumi, the wonderful Cyprus cheese which can be toasted without melting. The other is liver... something I don't like at all, but Richard very much enjoys:

Next to arrive was this scrumptious avocado based dish: 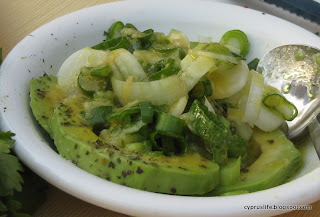 And this, which is little pastries filled with anari (another kind of Cyprus cheese or curd) and topped with grated cheese: 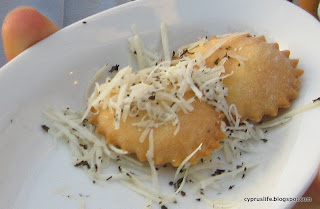 Then there was one of my favourites, which for some reason I forgot to photograph altogether - maybe I was too busy eating it. It's a cheese and tomato dish with vegetables underneath - I think maybe leeks and/or aubergines. Hard to tell, but very yummy.
Oh, and they brought some more olives: 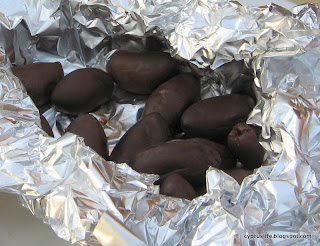 These dishes all look quite small, as they are - but with so many of them, we only wanted small portions. Besides which, neither Daniel nor I wanted any meat and Richard's trying to cut down on cheese, so there was more than enough.
Soon another meat plate arrived: 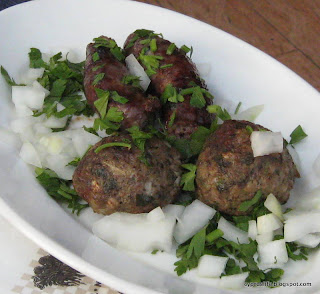 That's Cyprus sausages, and sheftalia (which I think of as a cross between hamburgers and haggis). Richard and Becky shared this dish.
And another meaty one - this is a couple of portions of a sweet-and-sour pork: 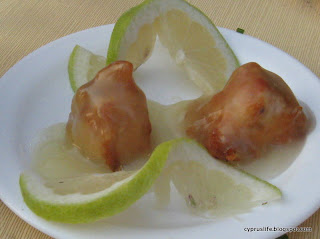 And my favourite: mushrooms. On previous visits the mushrooms have been fairly plain, but this time they were mixed with a kind of scrambled egg. Absolutely delicious. The others had a small portions - since by this time we were all beginning to feel quite full - but I couldn't resist finishing this one entirely: 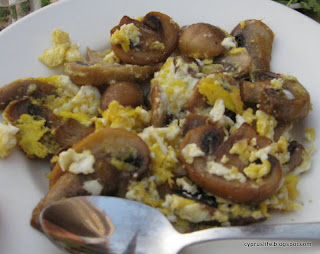 Then, the final plates arrived. Several kinds of meat on a plate with chips (french fries) in the middle, just in case anyone was still hungry. And two small dishes: the one at the top of the photo is pourgouri, another Cyprus speciality made with bulgur wheat, and the one at the side is pasta covered with cheese.
Becky tried the pourgouri as she'd never had it before, and Daniel had a little, but Richard enjoyed the meat, and I was too full to eat anything else by this stage, other than a few bits of tomato and cucumber which still remained from the Greek salad. We didn't even touch the pasta dish. 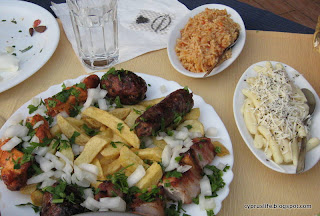 We sat and chatted for a while, with Daniel and Richard eating the occasional chip... but there was still a lot of meat left over, as well as the pasta and most of the pourgouri: 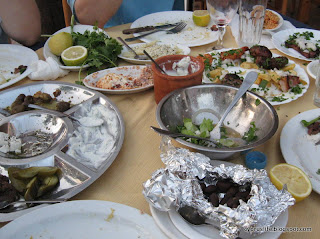 After it was clear that we'd finished, the dishes were cleared away and we were given a plate of candied fruit: 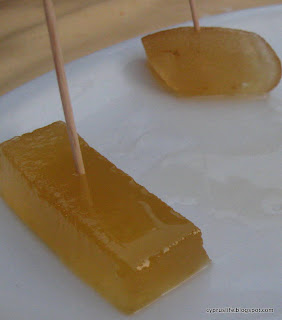 Even I managed one of them, as it was quite light, and the others had two each.
We all agreed that a two-portion meze was more than enough for the four of us.
The price was pretty good too. Daniel, Richard and Becky shared a bottle of red wine, and we all shared a bottle of water... and still the entire meal came to slightly under forty euros.
Posted by Sue at 17:42

Cyprus is a wonderful Place with warm weather most of the year and a beach only two hours away no matter where you are.Next year i am again planing my Luxury holidays in cyprus .

Yummy. This post reminds me of the meze we had in the small town of Peristerona when we made a trip to the Kykkos Monastery in 2007. We couldn't believe the amount of food that kept being produced for 2people, and it was impossible to eat everything. I can't remember the cost as it was in Cypriot pounds. The meze you had seems to have a great deal of raw onion; yeuch!

Oh my you make me hungry and homesick.....your descriptions are wonderful. We now get Greek yogurt and haloumi in our local market. The cost did seem reasonable.....what a great memory!