I reglarly write about Froutaria Achna, our local froutaria. I pop there two or three times per week for fresh fruit and vegetables that are usually much better value than in the supermarkets.

With extra people in the house we've naturally needed extra fruit and veg... so three or four times now, Richard has come with me in the car, and we've used a trolley rather than a basket. Today was one of those days. We did do a big monthly shop at Metro yesterday, where I picked up large pre-bagged value packs of apples, oranges, carrots, cabbage, peppers and cucumbers. But we needed some more produce and although I planned to walk to the Froutaria around 7.30am when it was still fairly cool, it didn't happen.

By 9am the prospect of walking anywhere was looking less and less appealing, since the humidity was high and the temperature rising. So when Richard said that it was too windy to go sailing today, as he had planned, I asked if he had half an hour to come with me to the froutaria. Since he likes shopping a great deal more than I do, he was happy with that...

Of course, knowing that we had the car meant that I bought a little more than I would otherwise have done. I always look first in the pink-bag aisle where everything is reduced. I bought peaches for at least two days' smoothies, and a large cauliflower. I bought potatoes, and sweet potatoes, and more tomatoes than I would normally have bought. I also bought three bags of nuts - almonds, plain cashews and roasted cashews - since they're better value there than at the supermarkets, and a bottle of carob syrup which is a useful natural sweetener to keep in the fridge.

I was about to buy some pink-bagged grapes when I spotted that there were lots of grapes in what we erroneously call the white-bag section. Erroneously because these bags are in fact transparent. They contain produce - usually two or three kilogrammes of it - at a fixed price of one euro. And there were several such bags of grapes.

Sometimes the white-bag produce is a bit old and squashy. I picked up one of the grape bags and examined it from all sides. I did see one or two slightly brown grapes, but they felt firm enough and, with Daniel in the house, I knew we could get through a lot of grapes in the next few days.

Cyprus grapes are perfect at this time of year. A few weeks ago they were a little sour, and quite pricey. In another month or so, they will be oversweet and a little soft. But right now they're exactly right...

So, since we had the car, I bought two bags: 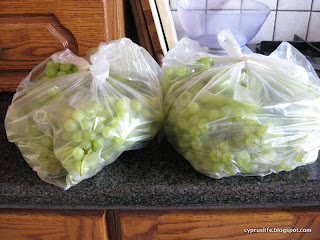 Each one weighed about 2kg. Four kg of grapes (that's nearly nine pounds, for anyone who still thinks in imperial units) for two euros (about £1.70 sterling or $2.50 US) seems to me like excellent value.

We had an extra guest for lunch today and between us ate about 800g of them. They won't last long.
Posted by Sue at 16:14

Catching up here! I've enjoying reading your last few blog entries and here are a few random comments...
I loved seeing Daniel getting involved with the young home-edders. I often get my pupils to look up words and they always grumble good humouredly (but they hate dictionaries...) I've had to stop using the one I had, as it used to be Johnny's and I remember his excitement when it arrived in the post. He asked if he could spend some time just looking stuff up in it... I can't bear to see the way other children feel about it. (Sentimental? Moi?)
We often have vegan mezzes which are very like the ones you wrote about, but vegan-version!
All that fruit looks and sounds wonderful. I LOVE fruit. All that heat has its compensations! :o)
And it's so nice to see Daniel and his Love snuggling!

Hi, I come and visit your site regurarly and I enjoy reading your blog. I have also found your recipe corner and will try out your slow cooker recipes soon!

I´m so glad you mentioned the carob syrup!
During my last visit to Cyprus I obtained some Carob Syrop but it is still unopened as I have no clue what to do with it!
Would you like to share some tips on how you use Carob syrop?
Many thanks in advance!
Grace

ooofff, just noticed my spelling errors in my first comment! Guess I was just too excited :-)
Grace

Thanks for the comments - always appreciated :-) Grace - I may write a post about carob syrup at some point. But in a nutshell, I use it as sweetener in bread for the breadmaker, as an alternative to honey or molasses. I also use it in granola, as replacement for honey. We have friends who use it instead of chocolate sauce on ice cream, or indeed any dessert that would benefit from something slightly chocolatey. It's a natural syrup, quite sweet, and I guess reasonably healthy.

and.. congratulations with your anniversary