End of August in Cyprus, but not yet the end of Summer

Some people, when they hear that we live in Cyprus, assume that we go to the beach pretty much every day during the Summer.

This is not the case. Indeed, for our first few years here, we went pretty rarely. We had the occasional day-out-with-picnic with visiting friends and relatives, at one of the nicer beaches, but that was about all. We're not great swimmers, and as the boys got older they had less interest in building sandcastles. They would sometimes go to the beach with their friends, but we didn't want to go during the heat of the day, and Richard used to work late in the evenings.

Three or four years ago we made a bit more of an effort to get some exercise during the summer, and would plan to swim at a local beach for an hour or so, once or twice per week during July and August. It was surprisingly refreshing and we enjoyed it, although it always felt like a lot of effort, somehow.

Two years ago, I was in the UK in July. But during August, we went to the beach every week with some friends from one of the local churches. We would take a picnic, and play 'boules' although we didn't do much swimming.

Last year, the Cyprus home educators organised a weekly get-together at a different beach each Wednesday. We took picnics, and swam, and hung out with our friends. And every alternate week we got together with friends from the house group we were attending, on Fridays. More picnics, more swimming. We went a few times just to swim ourselves, too. We probably went to the beach 15 or 20 times during the summer last year. And enjoyed it very much.

But this year, for some reason, my enthusiasm has waned. Our first beach gathering was very early in the year - May 1st, to say goodbye to some friends who have now left Cyprus. We'd just got back from the UK, and it was good to get out to Kiti. It was much too cold (from our perspective) to swim, and it was quite windy too. But we enjoyed catching up with various friends, in particular my small friend Helen: 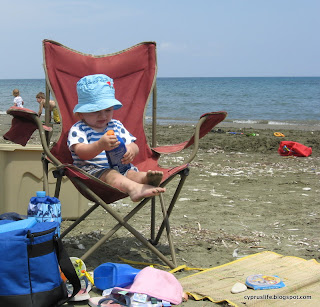 May is very early for a beach picnic, really. So we didn't go to the beach again until the end of June, when a picnic and get-together with the Cyprus home educators was planned.

Unfortunately, and unusually for Cyprus, the weather did not co-operate. It poured with rain. Some hardy souls did venture into the water in their swimsuits. I kept on my jeans and kagoule... but did at least wade a little way out: 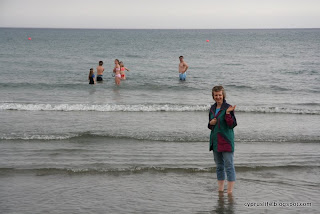 I think there was one successful beach gathering of home educators, which we were not able to attend. There wasn't the enthusiasm of last year, and several families went away for most of the summer.

Since then, we've been to the beach six times. Yes, that's just six times in two hot and humid months. The house group, in theory, got together on alternate Fridays, but most weeks there were only us and one other family. So we enjoyed spending time with them, and the children liked being at the beach. Helen's siblings like getting covered in sand, so - not to be outdone - she rolled in the sand herself at our first get-together, early in July: 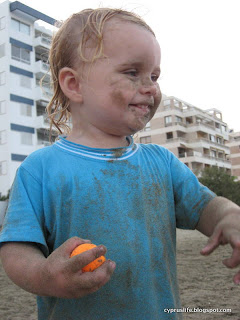 She's very photogenic. Here she is, a fortnight later, sitting in a hole built by her big brothers: 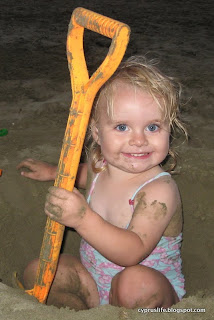 and here are the big brothers, Jacob and Lukas, two weeks later again, posing after getting covered with sand: 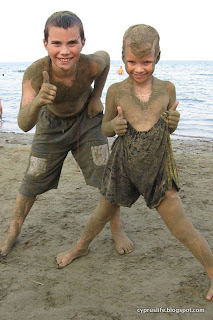 Lukas is the one who seems to like getting sandy the most, however. Here he is at the last house group gathering, a little over a week ago: 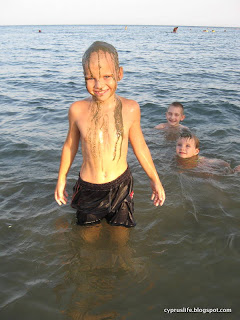 So that was four of our beach get-togethers.

We also went to a different beach early in August to say goodbye to someone who had been working with Richard for a couple of months. We didn't take our swimsuits, though. We hung out with colleagues and their families, and had picnics...

And the final occasion was a birthday gathering for a visiting friend of our friends, at a beach in Pervolia last Wednesday. We enjoyed it, but I found myself quite relieved to think that, most likely, it would be our last beach gathering of the year.

Lukas outdid himself in sandiness that evening: 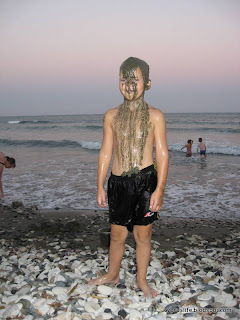 And here's a photo to say goodbye to the summer: Helen, in sepia (since the light was going, and the photo rather grainy). She's grown up so much in the past few months, and now looks like a little girl who is shortly to celebrate her second birthday: 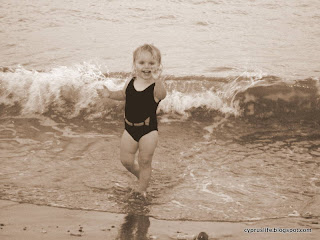 The temperature is still 33C in the shade today, and the forecast is for similar temperatures for the next ten days. September marks the re-opening of schools and clubs, the end of siesta-time, the start of a new season. But although the days are getting shorter, and I have felt a slightly cooler breeze on opening the windows at 6.00am for the past couple of days, I can't pretend that it's the end of summer just yet. I feel as if I've been in aestivation for the past two months - notwithstanding having first Daniel and Becky, then Tim with us - and would love to be able to switch off the air conditioners and get out of the house during the middle of the day.