An empty nest once more.

So. Tim was here for two weeks. We loved having him. After a week's working in the children's holiday club (mornings only - quite tiring, but he found it fulfilling and enjoyable) he relaxed some more for his last few days in Cyprus this summer.

He invited his young friends over for a game of Settlers of Catan: 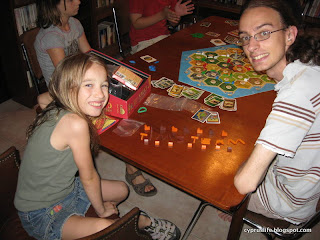 And when I invited some of my young friends over, he played with them too, building a Cyprus dungeon (complete with water tanks on the roof, and solar panels): 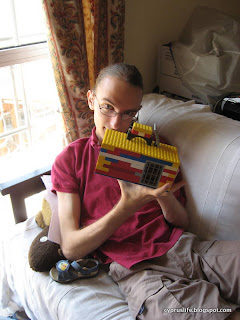 .. and didn't mind when Helen decided to play with it. 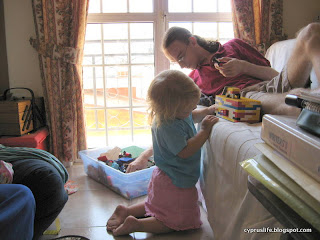 We played more games of Settlers with our friends: 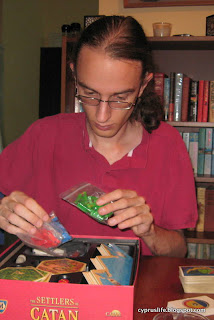 And on his last night, we even played - for the first time - a game of Cities and Knights with Seafarers of Catan. It was complicated, but not as lengthy as it could have been.

I did manage to get some sleep that night, before my alarm woke me at 1.30am. This is not a time when I like to be awake, but I wanted to say goodbye to Tim at the airport. And he wanted me to be there, if I could. So I struggled awake, and even remembered to take a picture as he headed towards the airport, with less luggage than any of us has ever managed before: 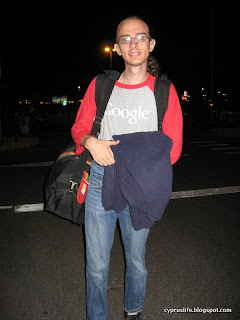 Although his flights were on time, and the journeys reasonably uneventful, he had a dull time in Vienna airport on a seven-hour layover, and a very frustrating time in Heathrow airport when he attempted to regain possession of his e-reader. He had accidentally left it in a cafe on his way here, but knew it was found and locked in a safe by BMI. Unfortunately, no key-holders were available. So he ended up arriving back in Birmingham two hours later than planned, without his e-reader, and very annoyed. He then spent all of Friday in a vain attempt to phone the number he was given, to arrange for its delivery. Over 100 calls later (ten of which were actually answered, none of them helpful...) he was more frustrated than ever.

But then, at 8am this morning, he tried once more and got through to someone intelligent who knew the procedure. A courier has been booked, and the e-reader, if all goes well, should be returned to him on Monday.

So our nest is now empty again, and will remain so until - we hope - one or both of our sons return for a break over Christmas.

And I'm ready for the end of summer. Right now it's just after 6pm, and the shade temperature is being recorded as 36C. The humidity is only around 40%, so it 'only' feels like 40C. But that's a lot hotter than I want it to feel like any time, and particularly after three hot and humid weeks. Overnight, the humidity is apparently going to rise to over 80%. And the ten-day forecast for Larnaka does not predict any cooling of the weather. Or not significantly, anyway.
Posted by Sue at 17:54