A productive weekend, courtesy of the Froutaria special offers

I mentioned - when writing recently about making and freezing raw apple sauce - that I have determined to make more use of the special offer pre-bagged produce at a euro per bag at our local froutaria.

On Friday last week, I went there and spotted a bag of lemons. They looked rather grubby and spotty - perhaps even windfalls - but as far as I could tell, they were locally grown ones. I hadn't made any lemonade since just before Tim arrived, early August, and Richard very much likes my home made lemon squash.

So I carried home a bag of lemons, along with other produce I wanted, and when I weighed them, discovered that I had bought over two and a half kilogrammes: 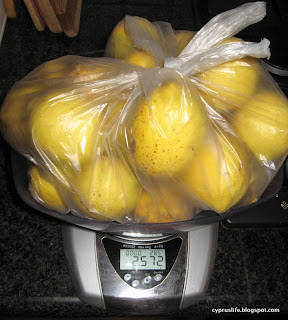 They were distinctly dirty... 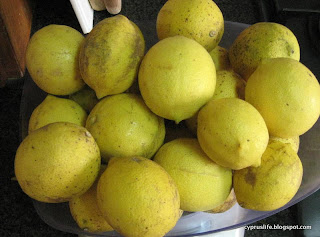 But I scrubbed them well, particularly the ones I was using for peel. As they were small, and rather hard, they weren't all that juicy; it took 25 of them to make a litre of juice. But I got my three bottles of lemonade to put in the fridge, which should last a couple of weeks, probably: 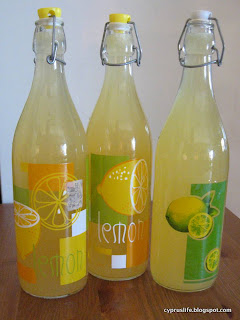 Cost: approximately two euros (a little less than one bag of lemons, one kilogramme of sugar, and some cooking time).

I actually made the lemonade on Saturday morning, after I'd popped to the froutaria again. This time, the one-euro shelf was piled high with produce. I immediately decided on two bags of tomatoes: 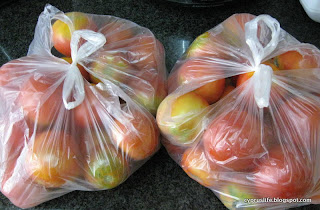 - which turned out to be about 7kg in all when I weighed them. I also bought another bag of apples - big ones, this time - although I hadn't quite decided what to do with them. With the other fruit and veg I wanted, I was quite weighed down on the walk home.

Still, despite continued high temperatures, I was feeling quite energetic. So while the lemonade was simmering, I chose about two and a half kilogrammes of the slightly better tomatoes, and popped them, a few at a time, in boiling water until they had softened. The first time I prepared chopped tomatoes for the freezer (to replace canned chopped tomatoes, which are expensive in Cyprus, and apparently not very good for us as the tomato juice reacts with the inner coating on the cans) I carefully skinned them all after blanching. It was time-consuming, and seemed like rather a waste.

The second time, I left the skins on when I chopped them... and they were just fine when used in lasagnes or casseroles or soups. I still do the blanching, because it helps the juice to be released as I chop the tomatoes, but it's a great deal quicker not having to skin them.

The result of this was six 450g containers of chopped tomatoes in their juice to be put in the freezer: 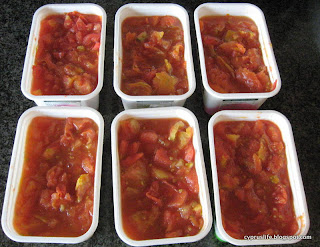 As for the remaining tomatoes (more than 4kg of them) I had decided to make passata - thick tomato puree - which I also planned to freeze. I found many recipes online, some of them suggesting that the tomatoes be roasted first, most of them recommending that chopped onions and garlic be gently fried in olive oil before adding the tomatoes (roasted or raw). There were many variations on the theme, so I thought I'd begin with as simple a recipe as possible. I had a very large onion, so I chopped that and gently stir-fried it. Then I cut up about eight or nine smallish garlic cloves - too small to be worth roasting whole. But no point crushing, since they were going to be put in the blender anyway. I threw in about a tablespoon of basil, as I think it goes well with tomatoes. Then I roughly chopped all the remaining tomatoes, and added them, a few at a time, stirring as I did. My largest saucepan was fairly full by the time I'd put them all in: 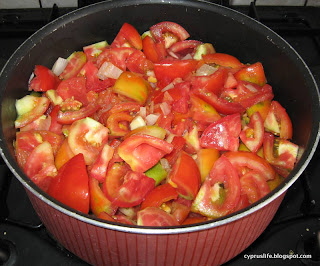 Then I left them to simmer, stirring now and again. The recipes I'd found online gave different times for this process, but all agreed that the contents of the pan should be softened and reduced. A bit like preparing fruit for jam, apparently.

After about an hour, the contents all felt soft, and were somewhat reduced, although not as much as I had expected. I was also a little surprised to see that the colour now looked more like tomato soup than passata from packets: 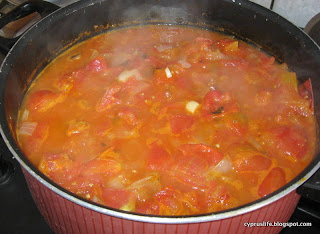 It even tasted rather like tomato soup, although I hadn't added any stock, or flour, or any of the other tomato soup ingredients. So I've no idea how well it will work as passata. I went ahead and blended it in the liquidizer in smallish quantities, after it had cooled down a little, and found myself with fifteen 250g containers of pureed tomato mixture: 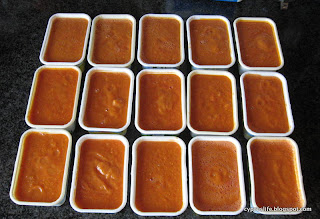 So they, too, had to be cooled, labelled and frozen.

By that time - late Saturday morning - I'd had enough of cooking, and I planned to use my bag of apples for dessert the following day, anyway, when we were expecting our friends for a cold evening meal.

I weighed the apples on Sunday morning, early, and found there were nearly three kilogrammes. 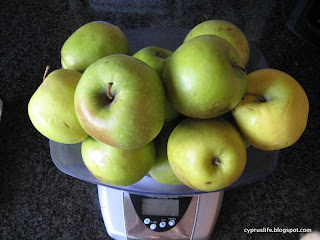 I kept a couple of the nicer-looking ones for eating or juicing, and browsed through some recipes. I decided to try some apple pies. I discovered that pies with pastry on top only are the English style of pie, while the sort we call double-crust pies (with pastry at the bottom as well) are more normal in America. The pies with pastry at the bottom and not at the top (such as pecan pie or lemon meringue) are technically tarts.

I also discovered a packet of frozen blackberries in the freezer. Commercial ones, which were probably well past their sell-by date and probably bought by mistake when I wanted a few frozen raspberries for smoothies. (Neither fresh raspberries nor fresh blackberries are available in Cyprus, other than in tiny quantities at extortionate cost for a few weeks of the year). So I thought I'd make one basic apple pie, and two smaller apple-and-blackberry pies.

Unlike crumbles, the fruit doesn't need to be pre-cooked for apple pies, so I peeled and chopped five, to fit in my larger pie dish, sprinkling with brown sugar (less than any of my recipes asked for, as these were not cooking apples) and a little cinnamon: 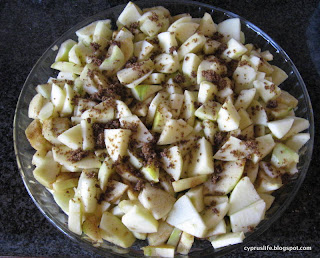 Then I cut up another three for each of the smaller pie dishes, and divided the frozen blackberries between them, sprinkling sugar on top: 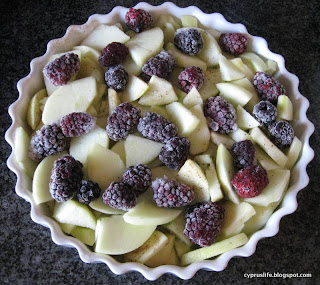 I then made shortcrust pastry, using half whole-wheat flour as I usually do, and was pleased that I'd estimated almost exactly the right amount for topping these three pies, with just a few scraps left to decorate them: 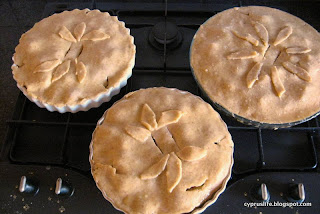 I then even remembered to brush them all with egg before cooking, and was rather pleased with the result: 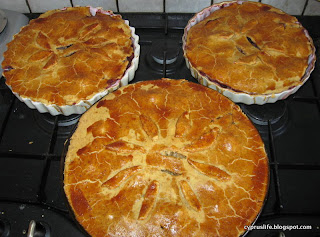 The consensus on Sunday evening was that they were good, although the blackberries didn't really affect the taste at all. Perhaps they really were too old to have used, although they didn't do any harm.

We didn't even start the second of the blackberry-and-apple pies, so I put it in the freezer for some future occasion.

Yesterday morning I went to the froutaria for various bits and pieces, and there was nothing on the one-euro pre-bagged shelves other than pickling onions. Not something I use - so I didn't get any special offers. Just as well, really, because despite my burst of enthusiasm for working in the kitchen at the weekend, I feel less energetic this week and am glad not to have to do any more preparation. I shall probably feel better when the weather starts to become more autumnal, which must surely be some time soon...
Posted by Sue at 16:58

Why do you pre-cook fruit for crumbles? I'd use raw for pie or crumble. Just showing I read right through your posts :-)

Actually I don't make crumbles as Richard doesn't like them at all. So I don't in fact have experience... but my recipe book told me that the fruit should be cooked. I assumed because it was usually a thicker layer than one gets in a pie. I hadn't made apple pies for years either! And how nice to know that someone reads right through my ramblings :-)