Around a year ago, our bird of paradise plant first burst into bloom. The amazing display lasted a couple of weeks, with new 'tongues' appearing as the older ones faded away.

The plant continued growing, almost bursting out of its pot. I kept thinking that we must buy a larger tub for it, and some more soil. And I don't quite know where the year has gone, but we didn't get around to it... and now it's blooming again: 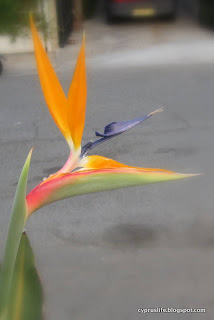 So I don't want to disturb it until these stunning flower heads have gone.

I've been watering the plants on the front terrace of our guest flat about three times per week, all summer. It's slightly less hot now, so I've cut down to twice a week, and the plants seem to be doing well. Once it starts raining, I may not need to water them at all.

As usual, most of our petunias withered away when the weather started to get really hot in July... all except this one purple petunia, which has not only survived, but appears to have spread itself out and re-planted itself somewhat: 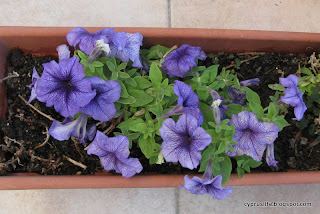