In praise of my slow cooker (crockpot)

I'm also, basically, inclined to inertia. After lunch, when I sit down at my computer to read email, or whatever it happens to be, I find that the hours whizz by, and suddenly my stomach alerts me that it's nearly time to eat.

I no longer make the mistake of buying pre-prepared food, with high prices and low nutritional value. If I have them in the freezer, it's far too tempting to use them. Instead, prompted years ago by Tim, I keep a rough menu - currently on a two-weekly cycle, although at times in the past it's been a monthly thing.

And because the thought of doing a lot of food preparation around 5.00pm tends to make me sigh, and try to think of something as simple as possible, I am delighted to have a slow cooker (known in some places as a crockpot, although to my mind the crockpot is the removable inside pot in which the food is cooked, while the slow cooker is the whole appliances, which cooks slowly: 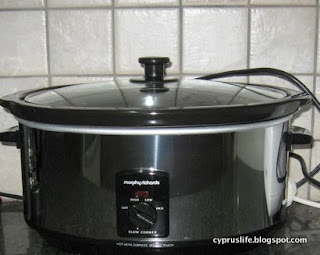 Whatever you wish to call it, it's a wonderful invention. Ideal for someone like me who quite likes to potter in the kitchen first thing in the morning, and also ideal for Cyprus summers, where nobody in their right mind would want to do food preparation late afternoon. Or even late morning.

Of course, with only two of us living here most of the time, it might be considered that a slow-cooker is a little excessive. Even a smallish one like ours is not good at cooking meals for two. It does much better with large quantities - using at least a kilogram of meat - which provides around eight portions in all.

So I make the most of it. Yesterday, for instance, I made lemon chicken with carrots. Actually, I only did about half the quantities in that recipe, since we now have only a 3.5litre size slow cooker. I thawed the chicken overnight, cut up the vegetables in the morning, threw it all into the crockpot around 8.00am... and when we came to eat, eleven hours later, an appetising meal emerged. I did remember to put a couple of potatoes in the oven to bake at around 5.30, and also steamed a bit of broccoli to go with it, but those are easy to do.

Today, I'm making a bolognese sauce in the slow cooker. In about ten minutes I'm going to prepare a cheese sauce [using almond milk and goat's cheese, since Richard tries to be dairy-free], and then layer it with lasagne pasta and a few scoops of the sauce to make a two-person lasagne. Yes, it does mean a bit of extra preparation now, and I shall probably top-and-tail some green beans to go with it... but it's no longer summer, and I don't mind a little extra food preparation when the temperatures are cool.

What of the leftovers?

Since we don't like to eat the same thing for several days in a row, I simply wait until the meal has cooled down, then decant individual portions into small tubs (empty 250g margarine/spread containers, usually, of which we have dozens), label, and freeze. If I have six portions of a casserole, which is usual, then that's another three complete meals where I don't even have to do early morning food preparation; I just have to remember to thaw them during the afternoon, then stick them in the oven in a pyrex dish to reheat, along with whatever kind of potatoes I happen to be doing that day. Or, in the case of bolognese, make another batch of cheese sauce to go with it. If I'm in a real hurry, I could even serve it plain with spaghetti.

I'm totally converted to slow-cooking. I only wish I'd discovered it years earlier, when the boys were still at home!
Posted by Sue at 16:39