Shrubs and Trees along the Salt Lake trail

Although it wasn't fully light by the time I left the house on Tuesday morning for my walk with Sheila, I could see that there were plenty of clouds. So, thinking we might see an attractive sunrise, I grabbed my camera. Sheila suggested that rather than walk in the aqueduct direction, as we usually do, we might try the other way.

It was a good opportunity to see that there really was, still, a fair amount of water in the biggest of the Larnaka Salt Lakes, despite the last few months being hot and free of rain: 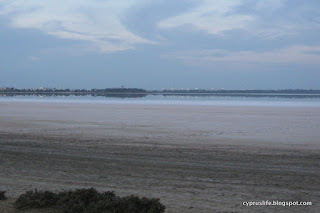 We walked as far as the end of that part of the trail, just under two kilometres from where we start: 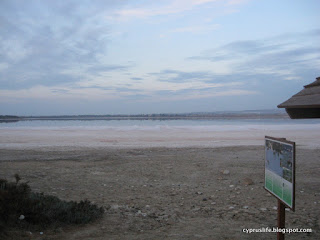 Then Sheila, who does both directions when I'm not with her, mentioned that some new wooden signs had appeared in recent weeks. They are supposed to help people identify some of the plants on the trail, but she felt that they were rather confusing in some respects. 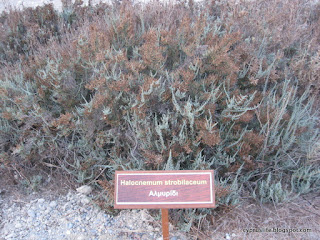 This one, for instance, gives the Latin as 'halocnemum strobilaceum' and the Greek as 'Αλμυριδι' (Almyridi) but, unlike the other signs, there's no English equivalent. I checked online before writing this, and, indeed, there doesn't seem to be any English word for this particular species, which is considered to be unique to the Mediterranean and Middle Eastern regions.

However, only a few metres away, is this sign: 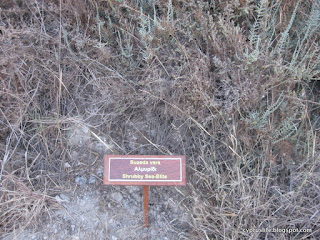 This is also labelled as Αλμυριδι' in Greek, but although the plant looks much the same, the Latin is completely different: 'Suaeda vera', with the English translation below, 'Shrubby Sea-Bite'.  Checking online, this does indeed appear to be the English name for this plant, which mainly appears in coastal regions.

However it's a bit odd that the Greek word is the same for both.

Walking back along the trail, we came across this: 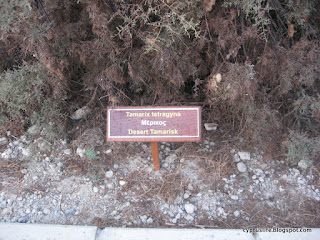 'Tamarix tetragyna', according to the Latin, and 'Desert Tamarisk' in English. My Latin, while rather rusty, suggested that it's labelled as a 'four women tamarisk' which turns out to be fairly close to the reason for its name: apparently it's a tamarisk with four stamens. It should be quite pretty when it blooms, although I don't recall it from previous years.

The Greek, however, is a little mystifying, saying 'Μερικος' (Merikos) which means 'partial' or 'incomplete'.

The next sign is confusing for a different reason. The Latin states, 'Acacia saligna', and the Greek 'Ακακια' which, transliterated, is simply 'Acacia'.

The English, however, describes it as 'Wattle'. Strange, but I gather is correct as the English name. 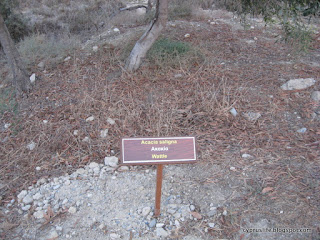 This is the same plant from a bit further away. According to Wikipedia, it should have bright yellow blooms in the spring or summer: 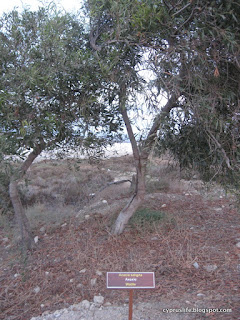 Next we came to a tree that's more unambigously labelled:  'Eucalyptus gomphocephala' according to the Latin. 'Ευκαλυπτος' in the Greek, which is, again, an almost exact transliteration of 'Eucalyptus', other than having the more typically Greek -os ending.

We weren't quite sure why the English just labels it as 'Eucalypt' since that's a more general name for a lot of similar trees, but at least it's similar. 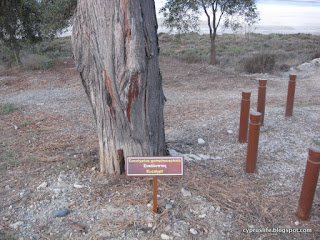 We wondered what the second part of the Latin name meant, since it's clearly made up of two Greek words rather than being true Latin. (Am I beginning to sound like a Cypriot here?) The last part, 'cephala' is from the Greek word for 'head'. I had to look up the first part: 'gompho' means a peg, or possibly the joint of a body. I was mildly amused at the thought of a peg-head eucalyptus...but perhaps it means that it has a jointed head: 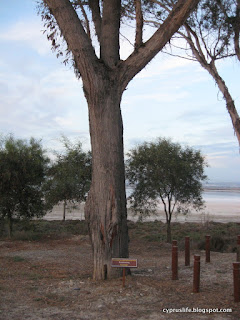 It's a tall tree, so I couldn't get it all in one shot. Here's the top part against the sky. The head part does indeed branch out into different 'joints': 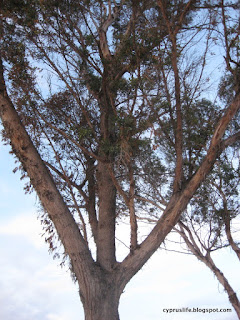 Then we came to another tree labelled as a eucalyptos in Greek, a eucalypt in English and 'eucalyptus camaldulensis' in Latin. I couldn't work out what the second word meant, either in Latin or Greek, but eventually discovered that it was named for the Camaldoli monastery near Naples, where it was first described. 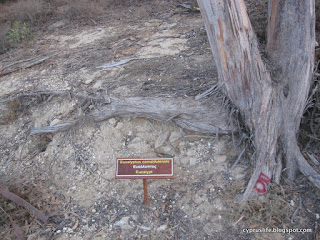 This eucalyptus appears to be jointed right from the base: 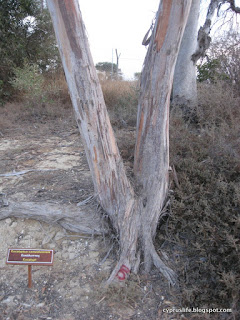 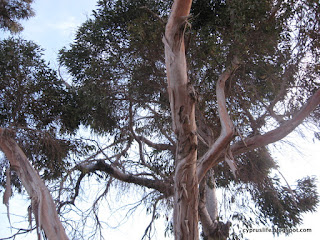 As is clear from the above, neither Sheila nor I are knowledgeable or particularly interested in plants... but we are both fascinated by language and word origins.
Posted by Sue at 16:18