Shortly after my last post, Sheila and I were on our usual four kilometre walk to the aqueduct and back, only to find that we couldn't actually get to the aqueduct: 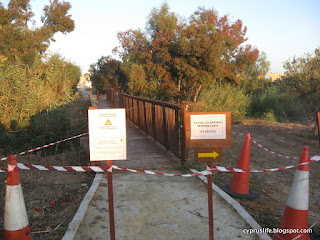 Well, we could perhaps have ducked under the tape and crossed the bridge (which had been getting more and more broken and rickety) but not being Cypriots we tend to follow what notices tell us (usually, anyway...).  So we went a little way along where the arrow sent us, but it just ended up at the main road: 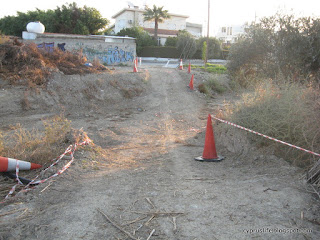 So we walked back, and instead looked at the lake, which was looking quite a bit fuller after the first real rain of the year: 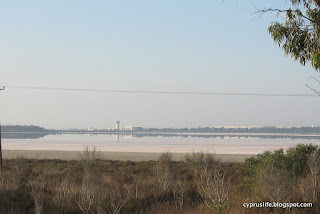 Unfortunately, although October usually signals the start of Autumn, the weather remained hot, and the sky mostly cloudless. It was even a bit humid sometimes. But then, a few days ago, I saw plenty of clouds in the sky, so took my camera with me in the hope of seeing a pretty sunrise.

I thought this one was very attractive, although a photo is a poor imitation: 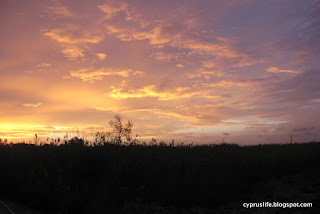 The bridge was still out of action, and evidently some repair work had been started. The old wood was removed, although not very far, and new metal railings were in place. 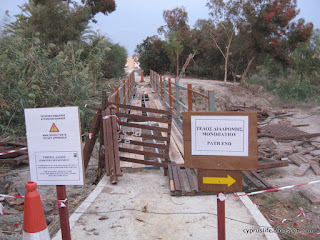 They seem to have been painted alternately brown and light blue, which looks decidedly weird, but perhaps it's a bit of creative undercoat. The planks being put down to walk on look stronger than the old ones, too: 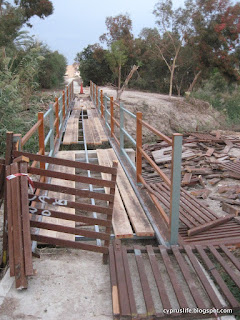 On Thursday evening, there was quite a thunderstorm and heavy rain. Friday was quite muggy, and then on Saturday there was a lot of rain. There was more this morning, and more predicted.

It's odd how often the last week of October is rainy here in Cyprus. It's usually the October half-term break in the UK, and families have often been disappointed that it's as wet here as it is back home, the only difference being that it's rather warmer in Cyprus. Temperatures are still 26-28C during the daytime, so although I wore long trousers today, for the first time since June, I still wore sandals, and nothing thicker than a tee shirt.