Although Advent calendars don't start until December 1st, today is officially Advent Sunday; there are always four Sundays in Advent so the first day is fairly often within the last couple of days of November.

Our older son and his family are coming out for Christmas again, a bit earlier than they did last year, so I thought I might try to be a bit more organised, earlier than usual, so as not to be worrying about Christmas preparation after they're here when life will get busier. Not that life tends to go along with plans - as evidenced with last year's best-laid plans for doing things in preparation for Christmas.

So I made our Christmas cake at the end of October. I thought it was earlier than ever, until I discovered that (according to Facebook) I had made our cake that early a couple of times before.

I ordered almost a year's worth of photos - having finally found a place locally that sells the kind of photo albums we use - and also made a cat calendar, as there was a special offer at PhotoBox early in November. I put in the order... and am still waiting for it to arrive.

I drafted a newsletter over a week ago. I found some photos a few days ago, and put them in. Then I realised that our colour printer isn't working so we'll have to get it photocopied at a local print shop. Not that we need a vast number; fewer and fewer people send out newsletters nowadays; the majority will go via email.

I ordered some gifts - books, primarily - to come to Cyprus from various online shops; one order has arrived, others haven't yet. I started ordering gifts for relatives in the UK, only to discover that a couple of them had nothing on their wishlists.

I was going to make mincemeat and Christmas puddings last week, but realised we had no suet. The very convenient supermarket around the corner is currently closed, and the smaller discount grocery shop which I use regularly doesn't sell it.

Last week, flicking through our junk mail, I saw an advert for the new 'Super Home Centre' in Larnaka, which was due to open on Friday. We needed some paint, and the flyer said that almost everything would be 15% off from Friday to Sunday. I quite like looking around shops like this - something like the UK's B&Q or HomeBase (or whatever it's now called) but we don't very often go to Nicosia, where the nearest one used to be.

So on Friday morning, we checked directions, and set off for this new store: 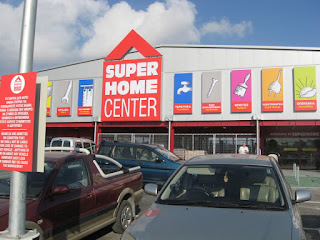 There were lots of staff there, and plenty of customers but it wasn't crazy or over-crowded. A very helpful man made up the paint we wanted after much discussion about colours and shades. We're using a new water-based woodwork paint for some door-frames; it dries a lot more quickly than traditional gloss paint, and doesn't smell too bad. A definite improvement, even if a bit more expensive.

We also found a tap we liked, which will - we hope - replace one that's been dripping for a long time, and getting worse. And we found some Christmas wrapping paper at good prices, and a mini fir tree, and a few other items... as you do.

Then, since we were in the right neighbourhood, we decided to pop into Carrefour to see if they had any suet.

However, they sell A4 printer paper at an excellent price, and they also had Christmas crackers on special offer. And we needed to sit down, so we stopped for coffee, and Richard was offered a free sausage roll with his: 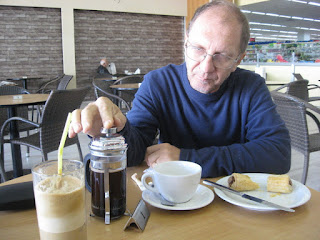 Although I'm now drinking hot coffee again at home, it was still warm enough that I had a frappé at Carrefour.

Then we went to Metro, and happily they had suet there (both the old style and the veggie, which we prefer) and realised there were various other things we needed... as you do. Cat litter, and treacle, and long-life milk for making yogurt...

By the time we had also looked in a local bathroom showroom (we are considering changing our bathroom fitments, which are elderly and not very hygienic) and been to the Post Office, it was nearly lunch-time.

We brought in our purchases, including a cat bed which had been at a much better price than we had seen elsewhere, and also discounted. And a colour that would match our living room. I made a cat bed two years ago which all the cats liked last year, but since I got it out again with the cooler weather recently, only Joan of Arc has been in it. We thought the other two were looking at it longingly, so decided to buy a ready-made one at the Super Home Center.

The only one who's shown much interest in it so far, however, is Joan of Arc... 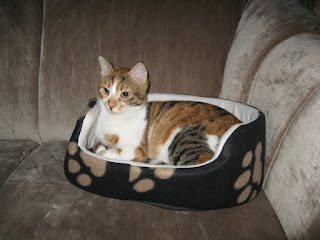 I was going to make our Christmas puddings today until I remembered that they need beer, and it's not something we normally keep in the house. So I'll have to buy a can tomorrow.

Instead, I made mincemeat, with our old family recipe, and it was enough to fill three litre containers: 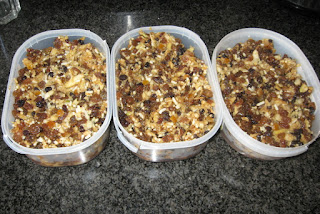 Given that it's still November, I'm a great deal more organised than I usually am at this time of year. I still need to order the last few gifts, and print our newsletters, and write/post cards, and make Christmas puddings, and mince pies, and gingerbread, and decorate the tree, and put up last year's cards (since most of this year's, if any, are unlikely to arrive before Christmas) and buy a poinsettia and eventually ice the cake... but maybe most of those things will get done this coming week.