The Middle of December

I had planned to write something on this blog every week in December. Ah well. It's now mid-way through December and the family have been here for a week already.

Two weeks ago we made our annual trip to the Jumbo superstore, primarily to find a few bits and pieces for David for Christmas. Inevitably we found various other things... kitchen containers, one or two gifts for other people... nowhere near as much as we bought last year, however.

We only used one of the small pull-along trolleys that have to stay in the store. But on our way out we were amused to see the new assistant who's evidently looking after the bigger trolleys: 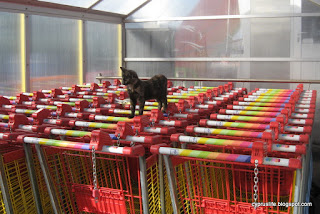 On the same Friday, we printed out our annual newsletter. I wrote the cards to post a day earlier and then sent them on the Saturday, earlier, I think, than I've ever sent cards before. We only post about thirty-five now (it used to be over 100) as many of our friends prefer to get a newsletter via email. I sent those out last weekend.

We were able to borrow a car seat for our grandson, about a week before he arrived. It's quite old for a car seat, but seems solid and comfortable, and fits just fine in the various cars we might be using. Here's Alex modelling it: 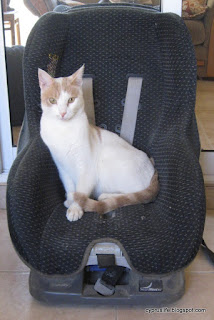 Before the family arrived, I ordered the last of the gifts, and was pleased to find, on visiting the Post Office, that our photos and some of my orders for family members here had come already. I made some gingerbread and carrot cake to freeze, and the first batch of mince pies. I also made our Christmas puddings.

Richard serviced the central heating and we made sure that was working... and we watched the news with some anxiety, as Cumbria, where our son and his family live, was having terrible flooding, making train travel impossible, and forcing many people to be evacuated from their homes.

But a colleague very kindly drove them to Liverpool airport, and on Tuesday last week, we went to the airport in Larnaka in great excitement to meet Daniel, Becky, and 18-month-old David who was extremely energetic after a day's travelling from the UK.

Here's how our usually fairly tidy living room looked after David had been here for an hour or so... 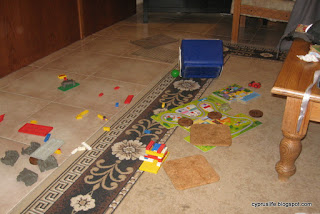 The following morning we took David for a walk to the Municipal Park where he first made for the large train to play on, but then decided to try riding on one of these rather different kinds of swing: 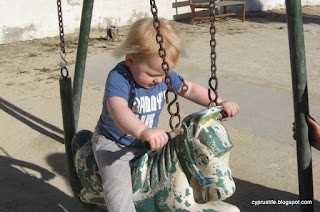 Although the weather seems a bit chilly from our perspective (we have now switched to our double thickness duvet at night) it's mostly sunny in the daytime, and seems quite warm to people coming from the UK.

On Monday I had a morning with the Christian writing group, followed by our annual potluck lunch. Everything looked beautiful and tasted good, and the company was most enjoyable: 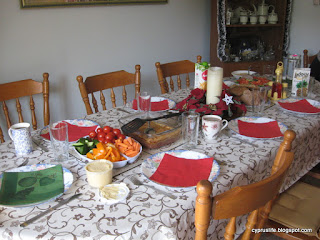 Yesterday, in what has become another tradition, I had assistance from our young friends in putting up our tree and decorating it: 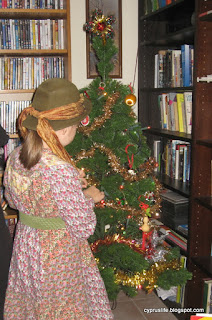 We did wonder if it might be a mistake with a lively toddler in the house, but he's only knocked it down once. He's much better behaved than the kittens were a year ago...

Something else we've been doing for a while now is to keep last year's Christmas cards, many of which didn't arrive until late December or even January, and display them over our windows and the sliding door: 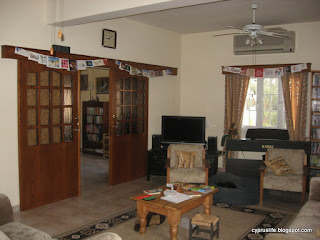 I bought a smaller-than-usual poinsettia this year, and tried various places for it, knowing that our usual spot would be targetted by David. Unfortunately he found it anyway, resulting in a great deal of soil having to be swept up... so I decided to put it outside for once. We bought a small potted fir tree a couple of weeks ago, and last year's poinsettia has stayed alive (for the first time ever) so I put them with some red geraniums outside our front door: 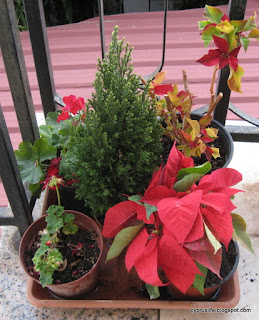 I made a second batch of mince pies yesterday, and today I wrapped all the family gifts... so, all in all, I'm pretty well ahead this year.