It was around October 10th when, as I wrote in my previous post, the little bridge near the aqueduct was closed for repair.  This is how it looked, at the end of that post, on October 22nd: 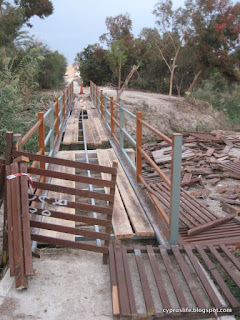 Note the not entirely tasteful alternating of brown and blue upright posts, and the mess of the previous boards and railings scattered around the side.

By the end of October, little had changed, as far as we could tell, other than some of the blue having been painted over in brown, which was something of a relief: 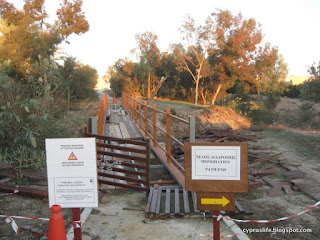 However, work then resumed. The mess of old wood was taken away, perhaps to be burned on a bonfire (yes, some people in Cyprus, bizarrely, celebrate the very British November 5th Bonfire Night).

Earlier this week, the bridge appeared to be finished. It looks very smart. All the new strong metal railings are brown, all the boards are laid to walk on, and there's even a wider section at each end, demonstrating that this is where people are to walk.

Except that there's still a warning sign telling us NOT to walk on it. 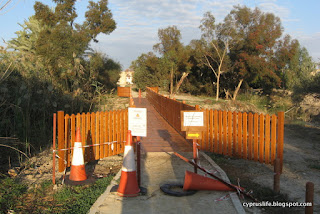 We didn't obey the notice this time. Other people were evidently walking across, as could be seen from footprints in the dew, and (more importantly, from my point of view) it looked entirely safe.

So for the first time in weeks we walked the last few metres to the aqueduct before turning back again. The sun was ahead of us so it's harder to see the other end of the newly renovated bridge in the photo, but this is how it looked: 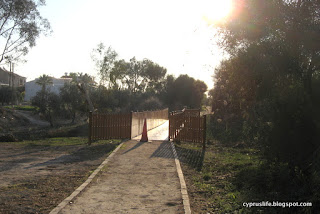 No warning notice this end, and just one bollard that could, theoretically, be intended to deny access.