How to stop random birds from nesting on air conditioners...

There are a lot of birds around here - pigeons mostly - and they're a bit of a nuisance. They flap around the rooftops, producing droppings that either mess up the outside steps, or - worse - make a kind of channel in the tiles that can cause serious leakages when it rains heavily, as it does from time to time in the winter months.

They also like to nest on top of the outside sections of air conditioning units. Any time I opened my study door during nesting season, until about six months ago, I'd hear a fluttering and flapping and birds would take off hastily, while bits of stick landed on the ground below. Sometimes the cats would sit at the window, or on the chair below the air conditioner, chattering noisily, trying to protect the house - or, depending on the cat, trying unsuccessfully to fly after the birds.

I know, I know. This is very much a 'first world' problem. The birds don't, as far as we know, carry disease, and we're very blessed to have a house at all, let alone air conditioners. We don't want to harm the birds so we're not going to put out poison, as some locals might consider. And while we talked about putting a kind of netting on parts of the roof, it was complicated to do and would have made it even more difficult to clean if droppings landed anyway.

Then, perhaps eight months ago, Sheila and I were talking to an acquaintance on the Salt Lake trail one morning. She said something about using plastic snakes to keep the birds away. I was skeptical; it sounded like a coincidence to me, and I didn't think birds could be quite so stupid as to think a toy snake was real... could they?

A few days later, Richard and I were in Kleima, a big shop that sells hardware and household goods and some furniture and various other random items. As I was wandering up the aisles looking for something we needed, I spotted a tray of remarkably realistic looking plastic snakes. They cost a couple of euros each, and I recalled the recent conversation. Shuddering slightly as I chose a green and curly serpent, I added it to our shopping basket.

One of the cats saw the snake sitting on our living room table after we got home, and approached cautiously. A quick sniff and she realised it was harmless, so she batted it a little and then ignored it. The others didn't even bother to investigate. I know birds are less intelligent than cats, but even so... surely they would be able to sense that a plastic toy was no threat to them. And how would they know what a snake was anyway....?

We got out a ladder and I placed the snake on top of the air conditioner, and then pretty much forgot about it. It wasn't the season for nesting anyway, and then when we saw pigeons appearing on our neighbour's roof, I thought it was probably a coincidence that we didn't seem to have any birds on my study air conditioner.

Then, yesterday morning, I opened my study door and heard wild flapping of wings and fluttering, and two birds emerged from my air conditioner. I smiled wryly. They must have got used to the plastic snake, I thought. Or perhaps these birds were a bit brighter than the others. Or maybe none of them had been interesting in nesting there until then.

Later that morning I heard one of our cats making strange noises outside. I peered outside, and he was sitting on the chair underneath the air conditioner, looking up at the birds who were flapping around. I opened the door and they flew away as usual. I went out to talk to the cat... and saw this on the ground: 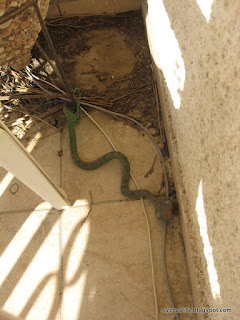 It had been a very windy night, and evidently the snake had blown down.

The birds continued fluttering to and fro, so later that morning I managed to get the snake back on top of the air conditioner. 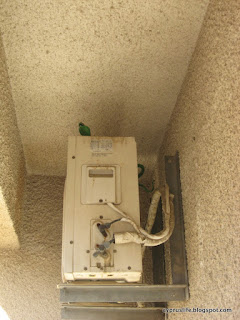 A bird flapped around about half an hour later... but then flew away again.

And, this morning, when I opened the door, there were no birds out there. There were several on our neighbours' roof, and sitting on their air conditioning unit, but none at all coming anywhere near mine.

It appears that this method actually works, at least for us. We did wonder if we could get some more of these unpleasant looking toys and put them on different sections of our roof, but we were concerned that they would blow off much too easily; my air conditioner is quite protected by the balcony and it takes a very strong wind to make it fall. But any heavy rain or gusts of wind could blow one from the roof... and we really don't like the idea of random plastic snakes landing on the ground around our house.