When we first moved to Cyprus, we sometimes went out for walks on Sunday afternoons, and a popular location was Kiti beach. It's about fifteen minutes' drive from where we live, an unspoilt location where one could walk along a beach with stones as well as sand, or at the top of a small slope overlooking the beach. It was often almost deserted.

But life moves on, and we hadn't been there for over a year.

Friends were staying last week, and wanted somewhere to go for a short walk. By the sea if possible, and not too far away. We decided to drive to Kiti. I was quite looking forward to seeing it again after all this time.

The route seems to change slightly, every time we've been there. But eventually we spotted the (rather underwhelming) lighthouse, and parked the car. We were a bit surprised to see railings, although the gate to the beach was open: 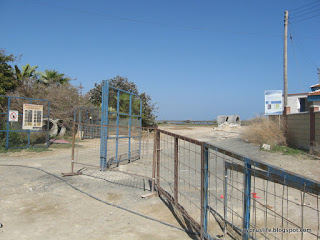 Here's the lighthouse: that not very tall tower towards the right of the photo below. 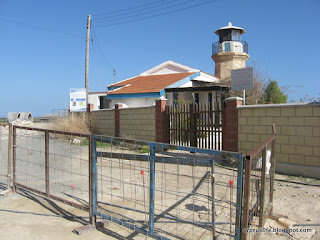 There was nobody stopping us from going through the gates and inside, but there was a 'no entry' sign and a big warning notice saying that it was dangerous. While two of our party weren't too worried about that, one of us was decidedly anxious about the thought of disobeying a 'no entry' sign, and I didn't feel entirely comfortable either. Even though it's Cyprus... 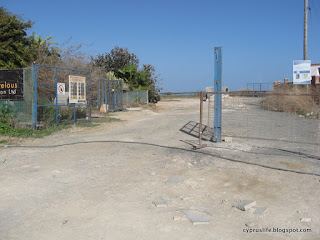 So we walked, instead, through the outdoor eating area of the restaurant (which was closed) and onto some steps going down towards the beach: 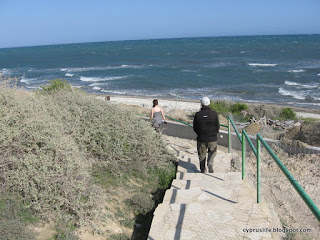 And then we were stopped by some fencing, and saw the beginnings of a concrete path, which would have been very difficult for at least one of us to climb over: 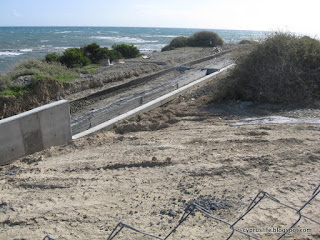 Eventually it will be quite a nice walkway, we think, but there was no easy way to get to it, or past it: 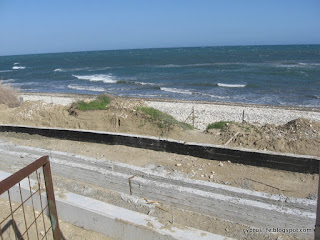 Then one of our friends managed to scrape her leg on an unexpected pole that was poking out of the ground, and we decided we weren't even going to try going down to the beach from there. 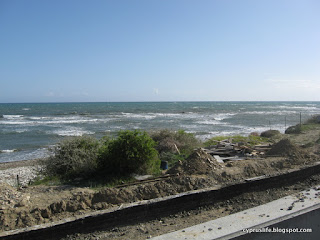 There was a sign lying just beyond the fencing: 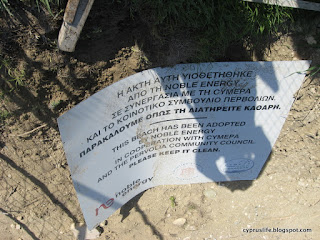 It says, in Greek and English: 'This beach has been adopted by Noble Energy in cooperation with Cymera and the Pervolia Community Council. Please keep it clean.'

We didn't know that companies could 'adopt' beaches, nor what it means in practice. Is it still open to the public, if they can fight their way past the wires and ignore the warnings, or does it mean we have to stay away?

We decided to try and find another place to access the beach, so once again we headed back. I felt quite sad that this lovely non-commercial beach is evidently going to be made more appealing to tourists and given walkways and so on. Then again, very few people ever seemed to go there.

We drove back a little way and followed another sign to a beach, only to be confronted by more gates with another similar warning notice: 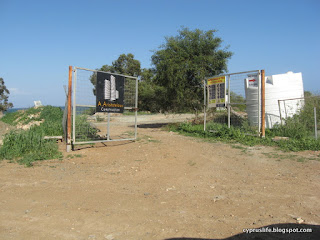 When we drove through anyway, there was some construction work impeding our way: 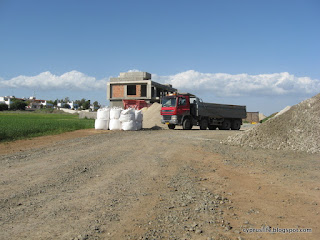 So we drove still further back, and followed yet another sign, in a residential area, which led us, finally, to a section of beach where we could walk and enjoy the sunshine and breeze: 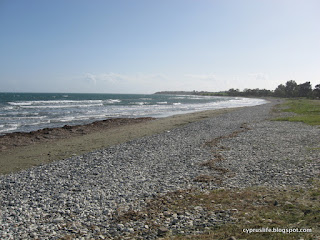 My fellow Cypriots would put concrete on the surface of the Sea if we'd let them...