It was some weeks ago when Metro supermarket showed signs of redevelopment. Perhaps even months ago. It's our favourite supermarket in Larnaka, and we used to go there weekly. But with just two of us at home, and an excellent froutaria and discount mini-market within walking distance, we now only tend to go to Metro monthly.

Last time we went there, early in March, there was evidently a significant amount of construction work going on. Most of the upstairs was blocked off, and the small space remaining was cramped with stationery, kitchen equipment and the like. The only way to get there was by the stairs at the back of the shop, as the escalators by the entrance were not available.

We guessed that they might be installing a 'travelator' which would enable trolleys to be taken upstairs, rather than having to park them somewhere on the ground floor, hoping that nobody else would take them. And then, just before I went to the UK for a couple of weeks, Metro temporarily closed for the final reconstruction.

It opened while I was away, so the first time I saw the new design was just over a week ago.  I had already learned that, rather than a travelator, they had installed large glass-doored lifts by the entrance.  I didn't think to take a photo when we went in, but this is what they look like from the back: 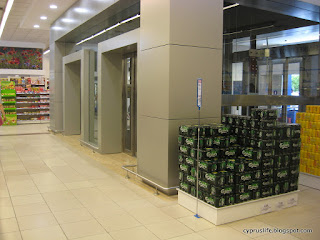 We took a trolley (Metro are one of the few places that do not require a coin to collect a trolley - a definite plus point in my view) and went in the lift. It was smooth and quite pleasant; I'm no fan of lifts but it wasn't at all claustrophobic, and could easily have taken several people and their groceries.

Upstairs used to have non-grocery items: stationery, small kitchen appliances, cutlery and crockery, mops and buckets, plastic containers, vases, mugs and glasses; also sandals, slippers, bedding, towels, candles ... not as good a selection as at bigger supermarkets, but we've often popped up there to have a look round.


However it now also has items that I'd count as groceries: in particular cleaning products, shampoos and soaps, and cat/dog food and litter. There seem to be fewer electrical goods (though we did see and buy a fan on special offer) and we did not find ornaments, candles or crockery, though they may still be there. Oh, and the entire alcohol section seems to have moved upstairs - there were several aisles with wine and spirits.


Then I realised that it's not just 'non-food' upstairs, but there are also apparently random items such as flour, nuts, health foods, and some cordials. Probably other things too but I was trying (in vain) to make sense of the layout. We found displays with sandals and slippers in at least three different places, and I'm not sure we went down all the aisles.


Still, we found the cat litter which was our main purpose for going to Metro last week. We went down again, and made our way around the ground floor level of the shop. I very much liked the style, which has much wider aisles than previously, making it much easier to navigate even when there are a lot of people around. 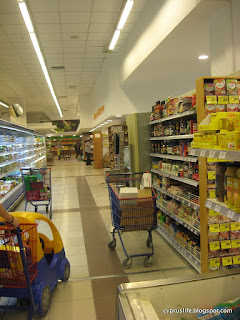 It will take a while to learn where everything is now being displayed, as lots of it is different from the way it used to be. It doesn't seem very logical, either; we found some flour downstairs, but nowhere near the selection they have upstairs. It would be annoying to do a big shop there and have to keep popping up and down in the lift; perhaps they will make it more clearly organised in future.

Still, the fresh fish and meat counters are in the same places, at the far end of the supermarket, and the freezer sections are where they always were, near the entrance (and thus also near the new lifts). 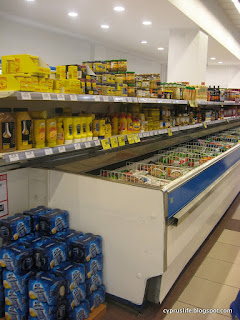 The checkouts are where they always were, too, with the same friendly people staffing them, and a display of chocolate nearby: 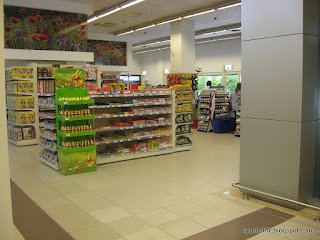 It was a quick visit, and my feelings were mixed. It looks good, and I very much like the wide aisles which makes the displays seem lower; the whole place looks more up-market and lighter.  Having to learn a new layout is a bit frustrating but then supermarkets change those from time to time anyway, and I try not to be annoyed by changes of that kind.

However I do hope they'll sort out the upstairs part a bit better, and make it more obvious what is up there.  I imagine we'll continue using Metro rather than any of the other supermarkets, and we'll get used to it. It will be interesting to know whether the new design attracts more customers, or causes some to leave, as it's unlike anything we've seen before in Cyprus.