It's almost three weeks since I wrote about our proposed bathroom renovation, with the reasons for going ahead, and what we were planning. I was very pleased to be flying to the UK the following day... or so I thought. In the event, my flight for March 29th was cancelled - apparently one of the airline staff was ill - and rescheduled for the following evening.

I could have gone to a very nice hotel for 24 hours along with most of the other passengers, but decided I'd rather come home. It was useful in that I was able to pay some bills and catch up with a few things I'd neglected. But it was VERY noisy.

I had assumed, in my ignorance, that on the Wednesday, when work finally began (after a two-day delay) that the builders would first of all work on our guest flat shower, taking out the old one and installing the new one.

The guy who came was the demolition expert. So he did take out the guest flat old and tatty shower, and left it pretty tidy, but he then got straight to work starting to demolish our bathroom.  I didn't want to look at first, but after some hours I took a look: 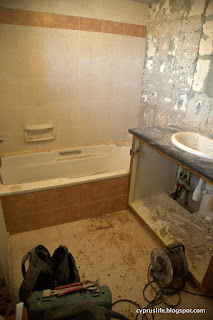 Since the tiling had been done thoroughly, and expertly, over the entire bathroom, it wasn't an easy task to remove them. And the noise was horrendous.

Had my flight been cancelled again, I would have taken up the option on a hotel rather than returning to the house for another day of destruction!

Happily my flight went ahead on the Wednesday evening; I arrived in Liverpool about 1am UK time, and I spent the night in the nearest airport hotel; Richard had re-booked everything for me after the cancellation, and I was very pleased indeed to have somewhere to crash out for a night: 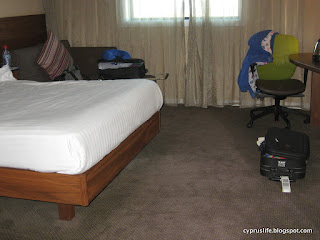 On the Thursday morning, the last day of March, I caught various coaches that took me up to Carlisle, and a wonderful reunion with my son, daughter-in-law and toddler grandson.

I had little thought to spare for the continued destruction of the bathroom, but Richard took photos such as this one, after more of the tiles were removed: 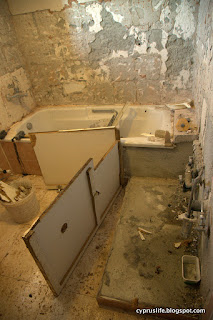 And this one, after the builders discovered that the entire bath was sitting on a slurry of concrete: 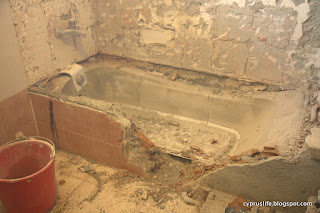 And this one, at the end of the day, after they had tidied up and removed the bath.  Alex was quite disturbed by it all, but determined to investigate: 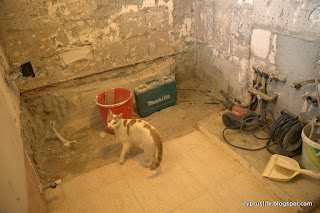 Friday April 1st was a public holiday in Cyprus, and Richard had arranged to go sailing. So work was halted for a long weekend. And they still didn't install the guest flat shower. Thankfully we do have another loo; we also have another shower - in a sort of cupboard in my study. We use it for keeping heaters and/or fans (depending on the season) and our beach equipment. So he took everything out of it, and used the shower there for the duration.

Meanwhile, I was having fun with my grandson in the UK, where it was a bit grey and showery. But the only noise was that of a cheerful toddler, and the bathroom was functional! 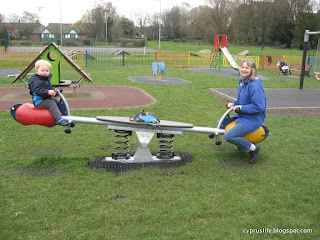 On Monday April 4th, the work resumed. I had really hoped they'd have started installing the new bathroom by then, but no... there was yet more preparation work to be done, uncovering and moving piles, drilling more holes and doing some initial cementing: 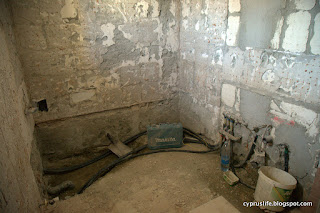 And here's how it looked by the end of April 5th - not much different, but by now there were new channels dug into the floor and more concreting done: 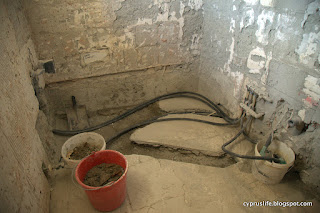 Meanwhile in the UK, my grandson wasn't too well during the day, but enjoyed tucking into some curry and naan bread in the evening: 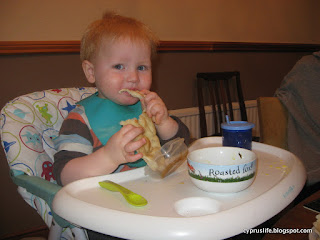 Wednesday April 6th was both sad and happy for me: I had to say goodbye to my family in Carlisle, but the train took me south to stay with my father and his wife in the Midlands. It was very good to see them and to catch up with my siblings and their spouses too, at the weekend.

Back in Cyprus, there was some progress, in that the walls received their first cement 'skim': 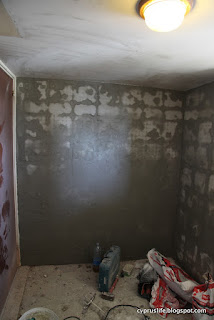 But a day later, although it had dried out, it didn't look much different and I was beginning to wonder if we'd ever have a bathroom back again. I think Richard was getting a bit concerned too... 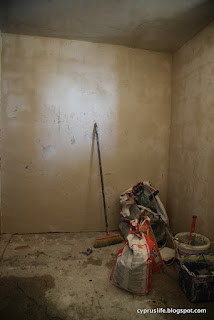 Then on Friday 8th - the day when it should all have been complete - construction began, and the tiles were put on two walls: 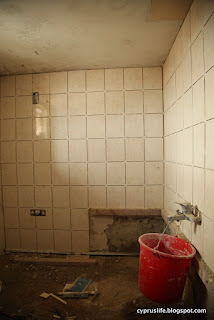 The builders realised that there was an imminent deadline: Richard was leaving the country on Tuesday 12th, so they worked through the weekend, grouting the tiles, laying the floor, and doing the electrics and lighting.

We had chosen some light orange paint for the other two walls - not wanting the entire thing tiled again - so that was the next task. By the end of Sunday 10th April, there was a shell with plumbing complete, lights installed, and tiling and painting done. It still looked a bit depressing. 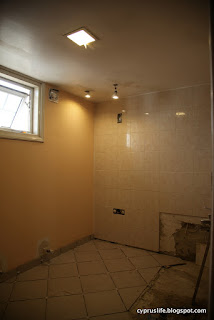 And then it all started to come together on the Monday, more so on the Tuesday morning. By the time Richard departed for the airport, he was able to take this remarkably different picture: 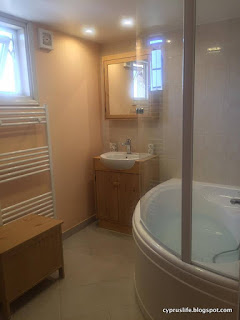 I had to say another set of sad goodbyes, and travelled down by coach to meet Richard at Gatwick. We were able to spend a day and a half with his mother, and to my surprise the thermometer rose and the sun came out. Tuesday, when we went out for the day, was apparently the warmest of the year so far: 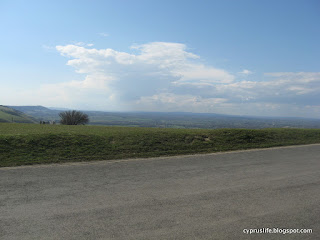 On Thursday we were back at Gatwick. I flew back to Cyprus in the evening, and about an hour later Richard flew in a different direction to some work-related meetings.

I felt a bit bad that Richard had put up with all the noise and chaos, yet I was the first one actually to use the new bathroom. It felt a bit strange at first, and the bath surface was so slippery that I went out and bought a non-slip mat as a temporary measure. When he's back we're going to put up some hooks, and pictures, and buy some new towels... but it's a very pleasant bathroom which looks amazing, and - due to an efficient extractor fan - should no longer attract mould. 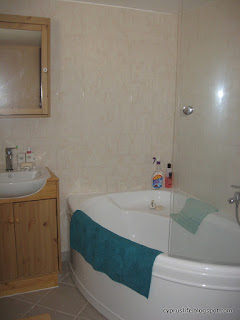 I confess to smirking a few times whilst reading this article. A few years ago, we had our one-and-only bathroom rescued from a hideous 1970-style décor. Unfortunately, the 2 day plan ended up being a 4 day sojourn. Although our neighbours were very accommodating, it meant we had to do
some serious planning e.g. not eating or drinking after a certain time and making use of any restaurant facilities. Let's not even mention bathing :) BTW, your new bathroom does look lovely.

The bathroom is beautiful.

I feel for your husband! My husband and I recently had our bathroom remodeled too. The construction took a full week longer than it was supposed to as the contractor had unexpected issues with old wiring. I like your shower! We went with a glass block wall with a separate wall. I love your glass surround, though!