Preparing for the Onslaught of Summer in Cyprus: cleaning curtains and air conditioners

Here's what I had been saying to various people:

- Every year since we moved to this house (almost exactly ten years ago) we have cleaned our air conditioners before using them for the summer.
- We had not, however, had them properly serviced, even though one is supposed to do so every three or four years, so they were well overdue.

Apparently, however, memory - as so often - is faulty. Searching in this blog for previous posts about air conditioners, I discovered:

- We didn't even find air conditioner fluid in the shops until the Autumn of 2008, and then only sporadically used it for the next couple of years
- We DID have our air conditioners - most of them, anyway - properly serviced in the summer of 2009

I wrote a lengthy post about the service, including the way we use air conditioning, and mentioning that a couple of them were very dirty and full of gunk, so we were glad that we did have them serviced. The one in what is now Richard's study was not working well, and was topped up with gas. The one in Tim's room had not been very effective, and had to be cleaned very thoroughly.

But although I remembered the study one being topped up (subsequently we replaced it with one from Richard's office when that closed) I didn't remember that we'd had any of the others serviced.

Still, that was seven years ago, so it was more than time for a repeat. And this time Richard knew of a firm that does this kind of thing regularly. He phoned on Friday, and they arranged to come yesterday morning at 8.00am.  We said that we would do the initial cleaning, so on Monday we went around the house, including our guest flat, taking out the filters, washing and spraying them, and running them to check if they were working. If anyone reading this would like to know HOW to clean air conditioners at home, then I wrote a post about that four years ago.

We have eleven air conditioning units in all, which might seem rather excessive for two people, but we both have studies, and our guest flat has two bedrooms, and is used extensively, plus an edit suite for Richard's work, so it's not unreasonable. Some are used far more than others, of course: the ones with computers in use are often on for several hours per day in July and August, and we run our bedroom one for an hour or so each evening during those months too.

Since this post is getting rather wordy, I thought I'd pause for a moment to show a picture of the air conditioner in my study: 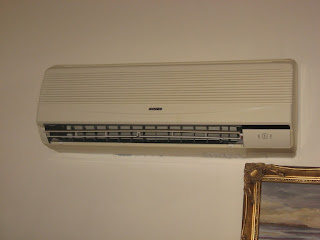 ...and the one in the living room: 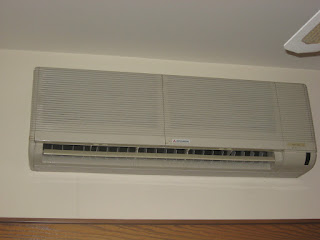 ...and the one in the dining room: 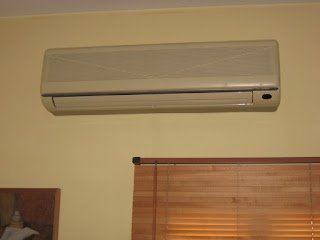 Yes, that's three entirely different designs. The one in the kitchen and in the two upstairs bedrooms are the same as the dining room one; the one in Richard's study, and two in the guest flat are yet another kind.  We have no idea if some are better than others, but several of them are considerably more than ten years old, so we wondered if we might need to replace some of them.

The men arrived promptly and set to work with a kind of power washer, catching the liquid (and dirt) in a trough which they strapped to each unit in turn. It looked a bit worrying (and we did ask them to cover the TV when they were near that) but was surprisingly non-messy.

We have no idea what chemicals were used, but the smell was quite overpowering at first. We opened all the doors and windows, and have done so today too, but it still lingers. It's not unpleasant, but gave me quite a headache yesterday afternoon.

We were surprised to learn that the air conditioner in Tim's room was very dirty and full of fungus, since it's not been used for the past couple of years, and not extensively before that. It was so bad that the service guy asked if we smoked in there! (No, we don't, and nobody in the house smokes). The one in the guest flat front bedroom was also very bad, but that's the room where we've had mould on the walls. We hope to have solved that problem by installing the damp proofing that I wrote about a few months ago.

Happily, none of the air conditioners needed to be replaced, and the only one that had to have some extra gas added was the one in our bedroom, so evidently the others are well-sealed and seem to be working well.

With that job out of the way, I decided to start my annual curtain-cleaning.  Probably more necessary than usual this year, due to our recent bathroom renovation. I don't know why I usually do this in June; perhaps it's an in-built need to spring-clean when it's clear that Summer will soon be upon us.

So today I laundered, hung out on the line, and then - about an hour later - re-hung back in place, all our main floor curtains:

Tomorrow I hope to do the upstairs ones. It's not a major job, though it felt that way when I first started doing it. It takes a couple of minutes to take each curtain down, slightly longer to re-hang them at the end, and the washing machine does most of the work. They don't need ironing at all, which is good because I don't iron in general.

On Monday I sprayed the soft furnishings with 'biokill', against summer insects, something I do once a month from the end of May until the end of September.

About two weeks ago I switched from jeans to shorts for the summer, and started drinking lunch-time frappés rather than hot coffees.  And yet my coconut oil still hasn't fully melted; the temperature in the house is around 24-26C during the day, and there's almost no humidity.  We haven't even put our duvet away for the summer yet, and I'm still - so far - going out for early walks.