A glut of soft fruit

One of the things which, on balance, I like about Cyprus is that fruit and vegetables tend to be quite seasonal. Most of what we find at the fruitaria is locally grown; there are imported apples, bananas, and potatoes much of the year, but soft fruit such as peaches and plums, and the huge inexpensive watermelons only appear during the summer months.

Of course, this is how it always used to be all around the world. People used to use the months of plenty to preserve fruit for the leaner winter months. And while I've always made jam using fruit in season when it's good value, it's only in recent years that I've started lightly stewing and freezing soft fruit, which I use instead of cans.

Soft fruit starts appearing in May, but it usually seems to be about the 10th-12th June when there's so much that it's available remarkably inexpensively. I have enough Scottish in me to like a bargain. I thought I might make apricot jam yesterday, before the weather gets too hot even to think about jam-making, so on Friday, when we do our weekly shopping, we made sure that we went to the outside fruit stall around 9.00, before all the best buys had been taken.

Sure enough, there were tubs of apricots, each around 1.5kg according to the woman selling them, marked at two euros. I thought that wasn't bad value, then she told me that they were actually one euro each. I said we would have two, and she gave us a third tub for nothing.  Then I chose a 2kg tub of plums, also at a euro, and then spotted an entire small crate of peaches at the same price - weighing them later, I discovered that there were over 5kg of them, all perfectly ripe.

So we bought around 12kg soft fruit for four euros.

We did the rest of the shopping and then I had the task of trying to fit everything in the fridge. I didn't have time to process the fruit on Friday, and I knew from experience that even one night left out would mean that the fruit would start to go bad.  We have quite a big fridge for two people, but it was a tight squeeze: 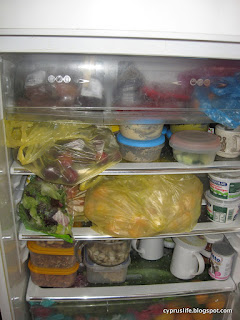 On Friday night I stayed up too late, and then woke very early Saturday; I don't do well with only five hours sleep but knew I had to deal with the fruit. So I started with the apricot jam and made nearly eight jars, using 2kg of the apricots: 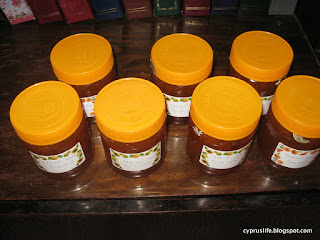 I counted the other jars I made earlier in the year, and the few left from last Autumn, and there are around twenty so that should be plenty to last until next March when I will make more strawberry jam.

Next thing was to stew the plums. I might have dried them - dehydrated plums are delicious! - but they were the kind that didn't easily give up their stones, so I cut them in half, stuck them in a pan with a little water, and stewed them for about half an hour. Four 450g tubs resulted, and I've labelled them as 'plums with stones'. 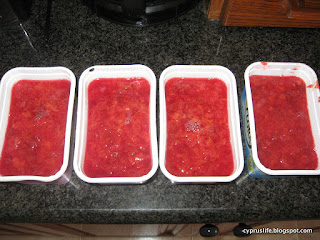 Since I couldn't dehydrate the plums, and didn't much like dried peaches when I tried with those a year or two back, my next task was to put another couple of kilograms, or so, of apricots in the dehydrator, which then ran all day: 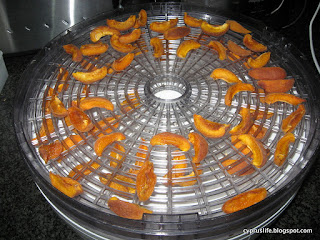 I don't dry them completely, but freeze them in little pots. The total was about 400g. A large part of any soft fruit is water.

Most of the rest went into another pan to be stewed; since I wanted to make a dessert the following day using stewed apricots, I only froze one tub and put the rest in the fridge overnight. 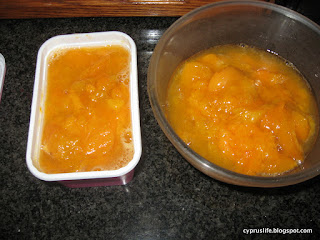 I did keep a few for eating during the week. I hope to buy more apricots next Friday so I can stew and freeze some more.

Finally the peaches.  Thankfully they were not 'cling' peaches, so it was easy to halve them and remove the stones, and then roughly slice them for stewing. I kept the best ones for eating, and stewed the rest; here are some of the resultant tubs ready for freezing: 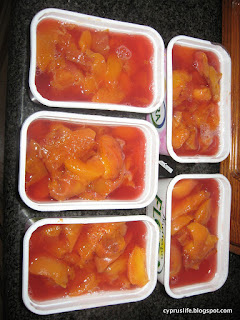 Those Flora spread tubs make perfect containers for around 450g stewed fruit, making them a perfect substitute for the (less healthy) canned equivalent, for cakes and puddings and pies.

It took me most of the day, off and on, to do this, but none of it was particularly strenuous and it was most satisfactory to have so much fruit processed and stored for the future. I don't think I had to throw anything away.

Alas for my pride. I had made the decision not to make a batch of granola yesterday, while I was dealing with all the soft fruit. It would be more efficient, I thought, to use the oven which would be on for our Sunday lunch. So I put the oats in about fifteen minutes before our roast potatoes were ready, and turned the oven off while we ate, not wanting anything to scorch.

After lunch, I turned the oven on again, added the seeds, nuts and coconut (etc) to the oats, along with the oil and carob syrup, mixed it up, and put it back in the oven.

Then I saw the vast array of dirty dishes around the kitchen. It felt daunting. Richard and Tim had both had to go out to do other things, so I decided to sit down for ten minutes to check email and one or two other things on my computer.

With the warm temperatures, we have lots of windows open and ceiling fans going, so the scent of my over-cooking granola did not reach me in my study, where I remembered something else I needed to do...

.. it was an hour and a half later when I went through to the kitchen with a sigh, knowing I had to sort out the mess. My nose was instantly alerted to the granola, which I had completely forgotten about.

So much for being more efficient with the oven usage. I was particularly annoyed because there's an 'off' timer on my oven, which I could easily have set. It might have been slightly over-done, but it wouldn't have been completely un-rescuable.

It actually looked worse than it does in this picture: 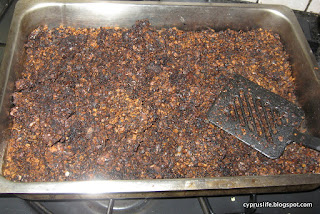 Nothing was edible. If I'd needed charcoal I might have been able to use it.  As it was, I had to wait until it was cool enough to pour into a plastic bag and throw it away.

I hate throwing food away.

So I felt suitably humbled, and made another batch.
Posted by Sue at 19:10