Ten years in this house - and yet more minor improvements

I'm not very good with dates.

I know all the family's birthdays, but if it weren't for my Google calendar reminding me in advance, I might well forget about them until too late to send a card or gift. I often don't even notice dates that other people celebrate - Valentine's Day, for instance, or Mothering Sunday. Facebook is quite good at letting me know when we, and other nationalities mark an occasion, so I spotted that yesterday was Independence Day in the United States.

But I had entirely forgotten that today, July 5th, is quite an important anniversary for us. Happily, Facebook told me that I'd mentioned it a couple of times in previous years... and so, this blog post is to celebrate that it's ten years today since we bought our house in Cyprus.

I would have been a bit sad if I'd missed it this year, though I'm sure I don't always notice it. That's partly because of it being a round ten years, and partly because in the first six months of this year we've done a great deal to the house, in recognition of our having owned it for ten years. It was looking tired; we had done very little before this year, and some of the paintwork was looking terrible.

I've written at length about the damp proofing system which we had installed back in March.  We won't know how effective it is until next winter, but the guest flat already smells less musty.

Before that, we had employed our teenage friend Jacob to do some painting; many of our window frames had lost all the paint, and some were quite rotten. So he sanded and painted, and repaired, and then painted the places where the damp proof course was installed, and the front of the house downstairs, which spruced it up nicely.

Then in April we had our bathroom replaced, something we had talked about for many years, but finally did this year. We did the last few bits and pieces for that in May, and are still extremely pleased with it.

But one thing that Jacob kept putting off was painting the railings on our front patio. We weren't surprised; it's something we kept putting off too. It looked like a very fiddly and time consuming job. However, our good friend Sheila (Jacob's mother) said that she would like to do it for us, so she came over early in the morning several times, and did a great job. I didn't take many 'before' or 'after' photos, but did manage to get this one, right after she had painted one half of the gate: 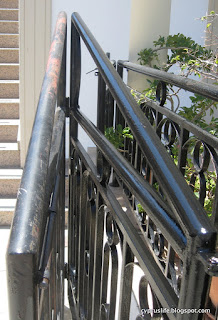 The difference is stunning.

When it was finished, we realised how very tatty the postbox looked. Like in the United States, people in Cyprus don't have slots in their doors for mail, but have little boxes outside. We have a PO Box at the Post Office where we get most of our mail, but there are vast amounts of junk mail advertisements for shops and eateries which arrive regularly, and it's a legal requirement to have a post box near the street. 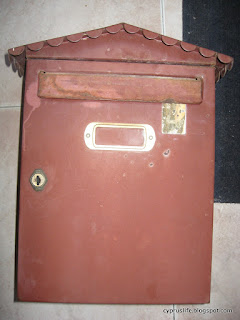 The lock was a bit rusty, and it looked terrible on our newly painted fence. We thought about painting it to match, but it would have been quite a task, and almost impossible to hold the flap and the opening door out of the way while the paint dried. It was held on the fence by ancient pieces of wire.

So when we had to make a trip to the local SuperHome Centre, for a couple of things, I had a look at the mail boxes. There were dozens of them in all kinds of shapes, sizes and colours. I nearly gave up when I spotted a small black one, at a good price, which would meet our needs perfectly. We bought a metallic number to affix, and Richard installed it... with cable ties: 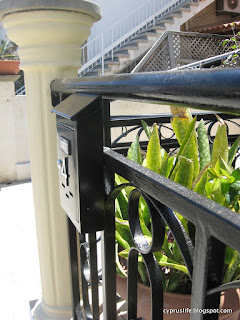 On the same trip to the DIY store, we saw some mosquito netting that could be fitted to the window sections that open at the top of some of our doors. We thought it would be ideal for the one in the dining room, which we like to keep open in Spring and Autumn, but have had to close in the evenings to keep out mosquitoes.

So we bought it, and Richard installed it immediately: 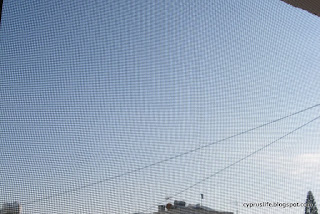 It took a little getting used to, and now the weather is so hot that we mostly keep it closed if we want to be in the room in the evening, so we can use the air conditioning. But it should be very useful in the Autumn.

There are still a few small things that need to be done: the last bit of plastering and painting on the wall outside our bathroom, a new fitting in one of the loos, re-tiling in the guest flat bathroom. Our friendly local builder said he should be able to come some time this week. It will be good to have these last few bits done. There are still other more major jobs that the house needs, but we've had enough of house maintenance for now, and will leave the rest until next year.

Happy anniversary and many blessings.