As I have mentioned before, from time to time, on Tuesday mornings my friend Sheila comes over for a couple of hours, bringing one or more of her daughters. We started this when the 'Mums and Tots' group which she belonged to and where I helped stopped meeting on a Tuesday, many years ago now. The girls are a great deal older than 'Tots' age, but are all educated at home. So we've continued the tradition, and mostly enjoy it very much.

Sometimes they spend most of their time colouring or drawing, sometimes we play board or card games, sometimes we read a lot of books... and sometimes they spend their time with the Lego. I always considered Lego one of the most important educational tools: it teaches construction skills, various maths concepts, and also exercises the imagination. My sons had a lot of Lego as children, mostly sets given by generous relatives. They would always start by building the relevant objects or scenes, but would then quickly adapt them, and eventually incorporate them into other imaginative play. For some years they had a huge Lego city, which led to many hours of play with their friends.

We've gradually given away most of their childhood toys, but the Lego has remained. The boxes and instructions are long gone, but it doesn't matter at all.

A couple of weeks ago, H (7) decided to build a straw house, so she used a lot of yellow: 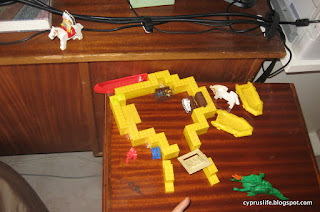 E (6) meanwhile had her king and queen feasting: 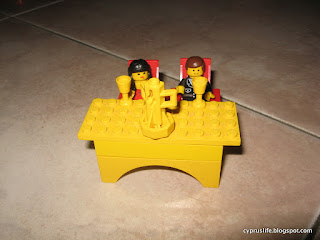 This 'forest' seemed a bit sparse.... 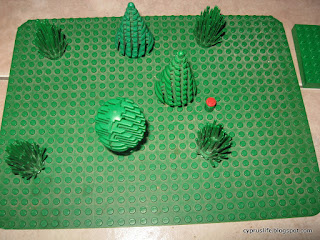 K (10) had built this house, and was creating inside scenes: 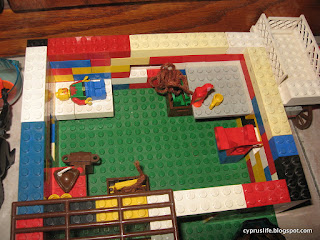 E asked for some yarn, and then created a carriage out of what had been a ship: 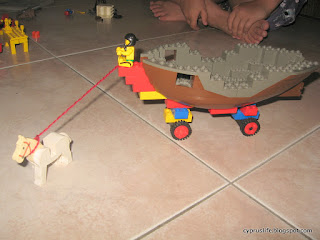 After a couple of weeks of intensive Lego, I started thinking about the rest of our collection which was stored in our guest flat. From time to time we've gone down and gathered a few extra pieces - mostly dragons and horses - but I knew it was a muddle of pieces, some of which could potentially be useful.

So I went downstairs to fetch it. And the girls were delighted, and found several things they wanted to use....

Unfortunately, it had been stored for some years in an old trunk which had begun to disintegrate. While it was now in a more hygienic plastic box, it smelled very musty. So when Sheila and her daughters had gone home, I decided that it would be a good idea to wash it.

It was a pity I didn't think of that sooner, since a lot of the musty pieces had become mixed up with the Lego we previously had upstairs, meaning that ALL of it had to be washed. And this proved to be a major task, which took me most of the rest of that day, and almost all of Wednesday.  There were several times when I rather regretted having started, since the temperatures were quite hot - then again, it did all dry fairly quickly.

I used crates to wash pieces, a few hundred at a time, in the sink with a bit of washing-up liquid, then spread everything on a towel to dry. 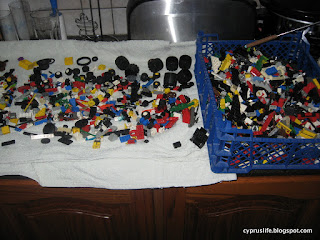 As I did, I started some rough sorting, including finding parts of 'people' which, in many cases, were muddled up with other pieces. The heads, round and yellow, were fairly easy to spot but some of the leg pieces were hidden until I spread them out and began to go through every piece. 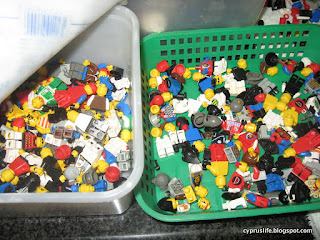 It didn't all dry quite as fast as I hoped, so the kitchen was a complete muddle for a day and a half, with scenes like this: 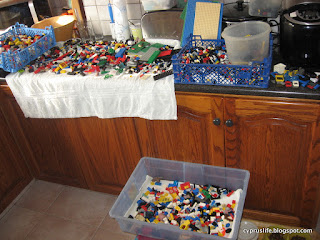 As well as sorting people, I made a box for trees and foliage of all kinds, and was surprised at how much there was: 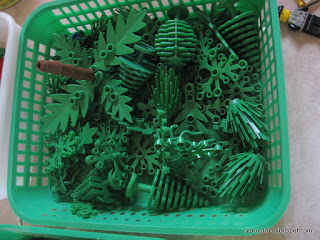 Another box took wheels and the pieces that held them together. 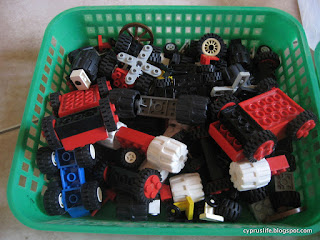 The girls had told me that they didn't need many of them, so the big 'space' and 'snow' wheels went in a box to go downstairs, along with some of the basic bricks and all the 'technic' lego which is really intended for older children and teens. They never play with the 'space' lego either, so when I found something that obviously belonged to that, I put it aside for downstairs too. 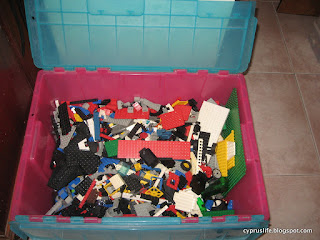 One of the 'people' we had upstairs was a skeleton, and I knew there must be another one somewhere, probably in parts, as we had a spare arm or two.  To my astonishment, I kept finding more skeleton pieces, and Tim told me that the 'Pharaoh' masks were supposed to go on some of them, as they were part of the Egyptian explorers sets which they had at some point.

Eventually I put together six of them, three to keep upstairs, and three for downstairs: 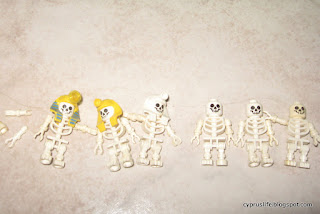 The girls were coming back Thursday morning, so Sheila could go and help at the Oasis refugee centre, so it was a useful deadline.  And sure enough, with a great deal of sorting - it became compulsive, somehow! - I managed to get everything back in the cupboard by nine o'clock Thursday morning: 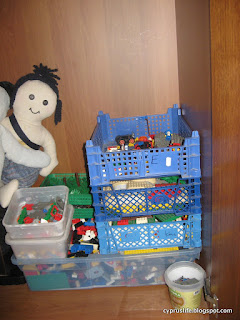 I even managed to find three stacking blue crates, one of which I allocated to each of the girls, so they can keep their current projects in them rather than having them muddled in with the main box.

As well as Lego in the downstairs box, I found the boys' old Meccano, which has gone downstairs again: 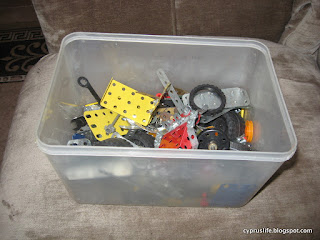 I also found several pieces of K'nex, which I added to the larger box of that, also downstairs currently: 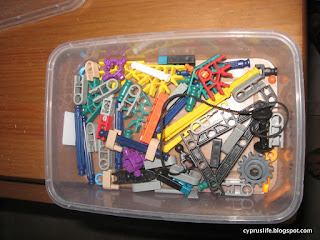 And this miscellaneous box of bits, which I might sort one day: 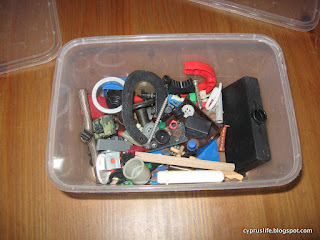 Or maybe not. Most mysterious of all are three purple knobbly square plastic objects, about a centimetre across. I've put them with the K'nex for now, although I think they belong to something else. But despite asking around, and even putting a photo on Facebook, I still have no idea what they are, or what toy - or game? - they belong to: 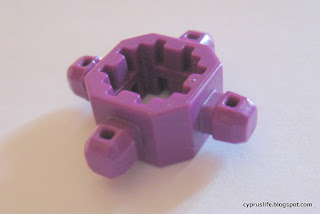