Christmas Eve and our latest newsletter

Continuing the theme of a fairly low-key Christmas, I didn't make mincemeat or Christmas puddings this year, because we still had some left from last year. I did make mince pies earlier this week, and our usual traditional Christmas lunch is currently in the oven, to be cut and refrigerated tonight, re-heated tomorrow along with cooking roast potatoes and carrots and brussels sprouts, and so on.

I iced our cake yesterday, but since it looks much the same as it always does, though rather less tidy (since I put marzipan only on the top) I haven't taken a photo yet.

Thank you so much to all who were concerned and prayed for our granddaughter Esther after my last post; within a few days she was home and free from infection, so we are very thankful and relieved. They are remaining in the UK for Christmas, with other relatives visiting.

Meanwhile our tree has continued to suffer from the cats' enthusiasm. Alex looks rather pleased with himself here: 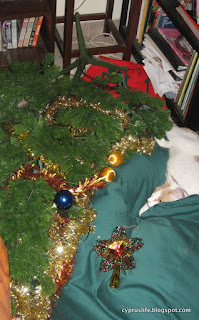 It's currently standing, however, and has done for a couple of days, so perhaps they have finally lost interest.

One entirely new thing that happened this year was that Richard was co-opted as 'Santa' for a couple of performances of 'The Snowman' by Little Muse Theatre.  I didn't see the show this year, not having a small child to take, but I gather it went well. He wondered if our grandson would have recognised him; when I saw the photos, I'm pretty sure I would not have recognised him before he spoke! 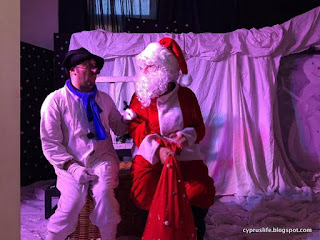 It's been a strange week. The sky has mostly been grey, and there has been a lot of rain - more than we can remember in some years, although statistics online show that December is usually rather a wet month in Cyprus. Sheila and I didn't walk on Thursday as it had rained all night, and hadn't stopped by the time we usually go out.

But this morning it was clearer, so despite the trail being a bit soggy in places we did our usual 4km walk, and saw that the Salt Lake was looking quite full once more. 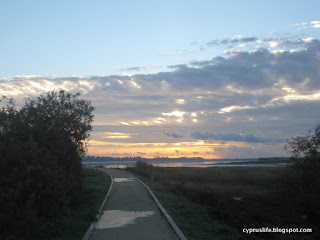 And finally, here's the link to this year's family newsletter.

Wishing all who see this a joyful and peaceful Christmas, as we celebrate again the birth of the world's most important Baby, and every blessing for 2017.

A happy and blessed Christmas to you and those dear to your heart.

Glad to see that all is well or has turned out well.

Winter here is being quite winterly this year.