Half-way through Advent ... and a baby

I made this year's Christmas cake at the start of November. But the sun was still shining, and there was no urgency to do anything else related to Christmas. I still have quite a large tub of mincemeat which I made last year, and one remaining Christmas pudding, both in the fridge. Since most of the family won't be coming here for Christmas this year, we won't need more than that.

I decided that Thursday would be the day for putting up our tree.  My small friends were here for the morning, so they enthusiastically sorted and placed the branches. I roughly strung the lights, and then the children hung up as many decorations as they could. 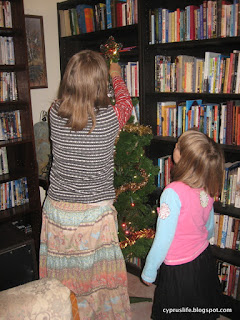 I'm not at all obsessive or perfectionist about the tree, and thought the final result looked pretty good: 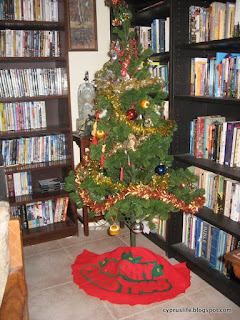 Alex, however, had other ideas: 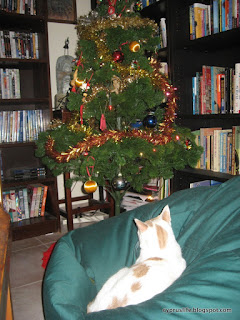 I had to pick up a prone tree twice during that afternoon, resulting in it now looking like this: 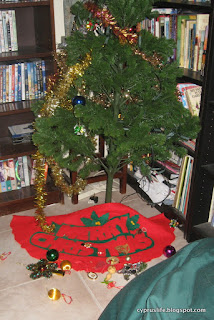 So long as the decorations are on the floor, the cats leave the tree alone. I may try to put them back again when they're not looking.

The girls were also quite excited about setting out my knitted nativity figures. They thought the coffee table would work well: 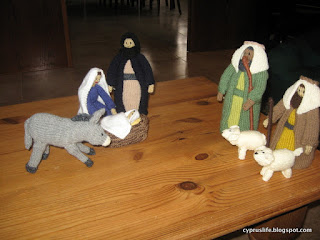 The wise men (or magi or kings) shouldn't really appear in the same tableau, but I didn't really want to put them somewhere else in the room, so we put them on the far edge of the table: 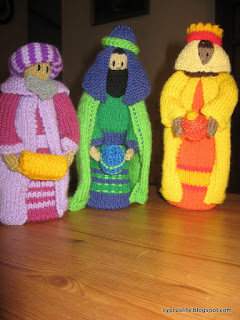 Oddly enough, other than a brief investigation, the cats haven't taken any notice of this. Here's the whole thing, in a little patch of starlight. Well, it's really sunlight, but the sun is, after all, a star. 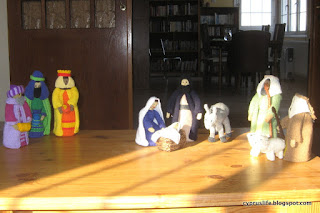 Christmas is, of course, about the birth of the most important Baby who ever lived. But in our family, we have also been looking forward to the birth of our first granddaughter, who was due on Christmas Eve. She's the reason that her parents and brother are not coming to Cyprus for Christmas this year.

However she decided to put in an appearance a couple of weeks early, so that when we woke up on Friday morning, we had the exciting news of Esther's arrival. Here's a photo taken today of the four of them: 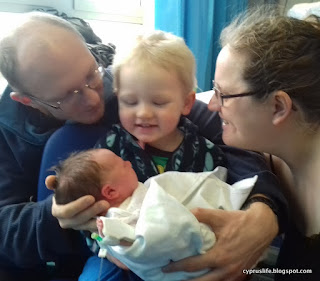 Although she doesn't have jaundice, she has tested positive for a Strep-B infection, which can be quite dangerous in newborns, so she and Becky have to stay in hospital for another few days. Prayers are welcome.

Prayers being offered. Do keep us informed,

Thank you, so much! She is now home, and as far as the doctors can tell, free of infection. We are all very relieved. :)

Thanks be to God for working His healing through the medical staff.