In Appreciation of my Dishwasher

A popular personality theory tells us that when we make decisions we each have a distinct preference for either 'thinking' (based on principles, categories, factual reasons, logic, etc) or 'feeling' (personal values, cultural expectations, pleasing other people, going with our heart, etc). It's not that simple, of course, and we all use all of the above at times, but the theory can be a useful way of understanding why some people make the decisions they do.

Recently, however, I read something which implied that in most cases, deep down, everyone makes 'feeling' decisions. Those who prefer 'thinking' may then try to justify those decisions rationally, or explain themselves, because (ironically) they care about their image and want to be thought of as logical. And, indeed, we all tend to find 'evidence' to support our decisions, whatever they might be. But the true 'reason' for most choices is - according to this - that it's what we felt was the best thing to do at the time.

I suspect there's some truth in this. Arguments and criticisms often arise due to differing principles and beliefs, yet in many cases decisions have been made due to personal preference or gut feelings. They may have been researched beforehand; there may be many 'thinking' factors taken into account: but when the purchase is made, or the contract signed, or the X marked on the voting paper, it's because at some level our heart tells us that it's the right decision.

A friend recently linked on Facebook to an article explaining why a large family in the United States have decided to wash their dishes by hand rather than using a dishwasher. Several people commented saying that they agreed, and gave reasons why they prefer hand-washing to dishwashers.

That's fine, and it's none of my business how anyone else chooses to wash their dishes. But it occurred to me that while I've read other posts, in the past, about why people choose not to use dishwashers (or computers, or air conditioners, or televisions, or whatever it happens to be) I rarely read posts about why people DO use them. So I started mentally composing my own blog post trying to refute each point from my own perspective.

Then I remembered what I mentioned above. People make their choices, sometimes based on past experience, sometimes based on hunches, sometimes on what they have read, or on inherent biases, or sometimes, (as is the case with the post concerned) to help family harmony. My viewpoint is equally valid, but there's no point presenting it as an argument.

We didn't have a dishwasher when we lived in the UK, but then neither did most of our friends. With a nice kitchen, built to suit my height (or lack thereof) and 'instant heat' water, washing up wasn't too much of a chore. We didn't entertain very often, and when we did it was usually close friends or family who helped with the dishes. At the time, I was ambivalent about dishwashers, seeing pros and cons, admiring them in other people's homes, but with no wish to have one of our own.

We didn't have a dishwasher at the house we rented when we first moved to Cyprus, either. But the sink was a bit too high to be comfortable for me. In Summer there was plenty of solar-powered hot water, but the kitchen was also hot and very humid. Washing up even just for the four of us was a major effort, and when we had guests, or visitors, even if they were keen to help, they were soon dripping and exhausted, unused to the temperature.

In winter the kitchen was cold and washing up much pleasanter... but without much sunshine we either had to run the immersion heater to get a tank full of hot water, or boil the kettle several times and risk being scalded (quite a high risk in my case!)

Now we have our own house, and one of the things that sold it to me was the space and plumbing for a dishwasher. Eleven years later there are just two of us living here, most of the time.  Recently I was here on my own for nearly two weeks. But I still used the dishwasher. Why? Because I like it!

Naturally enough, I can easily come up with some 'thinking' reasons, such as:

- I don't have to heat water specially to wash up
- I don't get the backache that inevitably comes with washing dishes at the sink
- Since having a dishwasher we haven't broken any glasses or plates while they're washed
- Everything is sparkling clean when it comes out, no matter how dirty it looked going in
- I pile dirty dishes inside at once, so they don't sit around on the counter top
- I don't have several soggy tea-towels to hang up every day

Since our dishwasher is very effective, we don't have to rinse anything beforehand, so there's never any doubt whether the contents are clean or unwashed.

We don't entertain as much as we used to, but a few days ago we invited a friend to join us for an evening meal. The dishwasher was almost full after lunch, so after we had our coffee I put it on and then started doing meal preparations. I made a turkey pie as we still had leftover meat in the freezer from Christmas. That meant I used a bowl for the pastry, and a pan for cooking the onions, mushrooms etc.

I made a quick chocolate dessert too, so that involved another couple of bowls; and there was also an empty 'spread' container, and two dishes from the fridge whose contents I had used as part of the meal. Plus measuring spoons and spatulas... 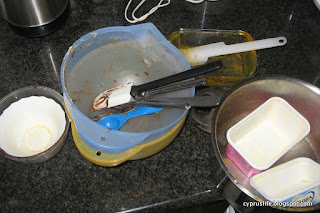 I could have stopped, and boiled a kettle, and washed everything by hand. But some of the containers were quite greasy, so it would have taken more than one kettleful. I couldn't have fitted everything on the draining board, so it would probably have taken me at least ten minutes with a pause for drying the first load. By the end I would have developed a bit of backache. Being me, I would probably have splashed the front of my clothes, too, and I would be stressing about running out of time.

So I prepared all the vegetables instead, put the carrots and tomatoes in the oven, and sat down to relax with a book for ten minutes.

I did still have to wash a few things, but they weren't greasy and only took a couple of minutes. They fit easily on the draining board: 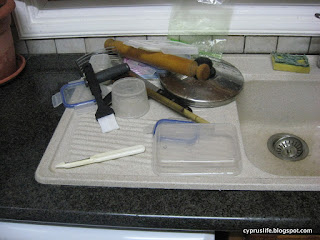 Shortly before our friend arrived, the dishwasher pinged and I was able to remove and put away all the clean contents from the previous day-and-a-half: 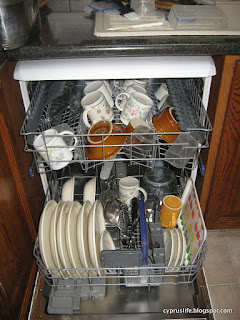 Having done that (which takes a couple of minutes and is still one of the most satisfying things I know of in the kitchen) I loaded in the bowls and other containers that I had used, leaving the kitchen surfaces clean and tidy. Clean, tidy surfaces make me feel much happier than cluttered ones.

We had a relaxed meal with our friend, and hot drinks afterwards. It was all very pleasant, but I was aware of the dirty plates and serving dishes etc piled in the kitchen: 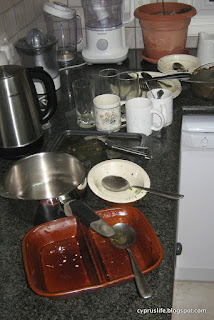 Because our dining area is next to the kitchen, I was able to potter while still being part of the conversation, putting leftovers in the fridge, and then loading the dishwasher. Everything went in other than the saucepan, which had only contained broccoli, so was easy to wash in the water which was still hot from the kettle.

I'm a strong Introvert. While I enjoy having friends over, and chatting, it tends to leave me tired and somewhat drained. If I'd had to tackle the washing up after our friend left, even if it had only taken ten or fifteen minutes, I would probably have become very irritable. Alternatively I might have decided to leave it until the following morning, and would then have felt annoyed when I got up and was greeted by a pile of dirty dishes, with food hardened onto them.

Instead, the dishwasher was gently churning and I was able to go and read for a while in peace.

Many years ago we hosted a US-style Thanksgiving meal for the house group that used to meet here weekly. There were eight people, so by the end there were eight large plates, eight side plates, eight dessert dishes, eight water glasses, four or five wine glasses, coffee mugs, large amounts of cutlery, and the empty dishes from the food I had prepared (even though everyone else brought something too and took their dishes home).

As we went around the table after the meal saying what we were thankful for at that moment, my overwhelming feeling was extreme thankfulness for our dishwasher.
Posted by Sue at 17:58

Renee from A Baker's Dozen said...

I really enjoyed reading your perspective. You have to heat water to wash dishes? I think that would probably be a deal breaker for me. As it is, I feel a certain amount of peace and tranquility as I wash dishes. And I totally understand why others choose to use dishwashers.

You have such a way with words!! I loved hearing your perspective. We use our dishwasher, but it is not as good as yours! We need to rough clean or the dishes do not come out clean.