Complexities of Technology in Cyprus

Car Tax, part 1
In Cyprus, we don't get reminders in the mail (or even electronically) to renew car tax. We're supposed to know that it needs to be renewed every January, although it's not usually possible to do so until at least the 7th or 8th, and there's a 'grace' period until the end of February, sometimes early March.

And whereas, a few years ago, we could take the information into the co-op banks and get it dealt with by someone else there, it now has to be done at the 'jccsmart' website, a portal that allows for the payment of many bills that can't be paid directly at the bank website.

So, on Friday two weeks ago, when I was doing our weekly bookkeeping, I logged into jccsmart, and entered the information for our blue car. No problem: it recognised the combination of numberplate and the last three digits of Richard's ID, and I was able to pay for another year's tax on my debit card.  Then I tried to pay the tax on the black van which is used for our PA system, and various other loads.  A warning message appeared: it needed an MOT before tax could be paid.

Fair enough; Richard knew it was due its MOT (they happen every two years in Cyprus). He was due to be away, so took the van round the corner to our friendly mechanic, who said that he would sort it out, make any minor repairs or adjustments necessary, and have everything ready by the time he got back.

PO Box Rental, part 1
A few days later, I had to go to the Post Office to post something to the UK. 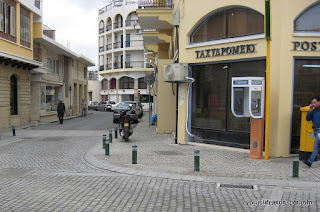 We get our mail delivered to a PO Box connected to this post office, and we'd just received the reminder that our subscription had run out. We needed to pay for 2017 by the end of March. So I asked if I could pay it while I was there, as it can't be done online. I offered my debit card, and they tried to enter my details, but then said that the system wasn't working.

When we first moved here, the system was a huge hand-written ledger. It always took a minute or two for the postmistress to find our records, but there was never any problem.  For fifteen years we thought it was quaint, but very Cypriot. And it worked. Since they have a new computerised system, it has been much more complicated.

I had already tried to pay ten days earlier, and the system wasn't working then.  So the postmistress (a different one, but they get to know the regulars fairly quickly) suggested I leave the payment with her, and she would enter it the following day when the system was working again, and put a receipt in our PO Box. I could hardly leave my debit card, and didn't really want to give the details, but I had cash on me, so I handed over the amount for for two years' rental of the PO Box, and she clipped it to our reminder, with a note of our name and phone number.

Car Tax, part 2
On Friday, a week ago, I thought I would try again to pay the car tax.  Once again, the warning message about the MOT appeared.  Evidently they had not yet got around to doing it.

PO Box Rental, part 2
On Sunday I was in town, although the Post Office was closed, but I checked the PO Box anyway. Our electricity bills were there, but there was no receipt for the box rental payment. I shrugged, mentally. Perhaps the system was still down.

I thought no more about it until yesterday, when I needed to post something else, so I walked the mile or so to the Post Office again, and checked the PO Box. Our water bills were awaiting me, but still no receipt for the box rental.

So I went in to post my letter. There was a different postmistress there, looking a bit hassled (usually there are two of them), and when I asked about it, and explained, she said that 'the system' was now working but she would have to look for my payment and paperwork, and would let me know. She wrote down my name and phone number again. I was beginning to feel a little anxious, but this kind of thing usually works in Cyprus. So I hope I'll hear from her next week...

Car Tax, part Three
When I got home again, I logged onto the JCCSmart site, and entered the van information. This time, I was given the go-ahead to pay the tax. So the mechanic must have done whatever was needed, and it had passed its MOT.

However, as I was entering my debit card details, I saw that the card had expired at the end of January. Oops. A pity I hadn't realised earlier, as I came past the bank on my way home from the Post Office, as I needed to buy some fruit and vegetables. But I put on my shoes again, and walked to the bank....

New Debit Card
New debit cards don't get sent to the owners, for security reasons. But in the past when my card had expired - or when it was about to - I simply popped into the bank.  New debit cards were usually in a rather random looking pile of envelopes, and it would take the clerk a minute or two to locate mine, but it was always there.

At first, when they started issuing them, my debit cards were only valid for a year at a time. But the last time I collected one was at the end of January 2014. The one that had just expired had lasted for three years, so I had got out of the habit of popping in at the start of each year. Since then, the bank has moved to new, smarter premises, and updated their systems. 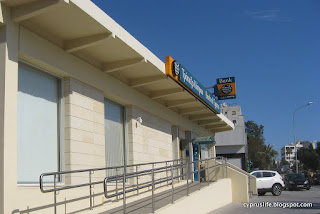 So when I handed my card to the clerk, after quite a long wait in the queue, he looked puzzled, but entered the number into his computer so he could see our bank account. I pointed at the date on the card, and said that it had expired, and I wanted my new one. He asked me if I wanted to withdraw cash. No, I told him, I just wanted a new card.

He asked if they had phoned me, to let me know it was at the bank. No, I said. When it had expired before, I came in, and they found my new one for me. He looked confused - this was not a clerk I had seen before - and went off to another office, before returning and saying that he couldn't find it. Then he turned to the clerk at the next desk, and asked him (in Greek) if he would deal with it.

The second clerk seemed to be more senior, but also went through the process of typing my card information into his computer. He clicked several things, and then said, 'Ah. Your new card has been cancelled.'

'Because you did not collect it in two months. It was at the bank on December 2nd. You didn't collect it so we cancelled it on January 25th.'

'But it hadn't even expired then,' I said, trying to stay calm and as assertive as I could. 'Why would you cancel it?'

'We telephoned and there was no reply,' he said. 'Maybe we have the wrong number?'

I checked, and they had both my mobile number and our house phone. I said that we were away for a couple of weeks after Christmas, and he said that perhaps they phoned then.

'So how can I get a new card?' I asked, realising it wasn't his personal fault that the card was cancelled incorrectly.  He said he would have to cancel the cancellation. He typed some more things on the computer, printed something out for me to sign, and said that there should be a card within the next few days, and that they would phone me....

Utility bills
So I came home again, realising that I still couldn't pay the van tax.

However, I knew I could pay the water and electricity bills at our bank website. I was pleased that they were rather lower than I'd expected, probably because we were away for a couple of weeks during the billing periods.

I logged into the bank site, and was greeted by a screen telling me I needed to update my details, for security reasons.  Yet more new technology.  I checked that they had correct phone numbers, address, and my passport number - no problem.  But then I had to fill in all kinds of other information about our status in Cyprus, and whether we filed taxes in other countries (we do, in the UK), and what my source of income is, and what it's estimated to be in a year.

I became more and more bewildered, since none of the categories applied to me, and I had no idea if they wanted figures relating just to me, or to both of us. But it wouldn't let me leave it until another time, so I had to make best estimates and keep going through several pages.

At last this was complete, and I was, thankfully, able to pay our electricity and water bills.

But what a performance.

When we first moved here, online banking in Cyprus didn't exist. Nor were there debit cards. We had to write cheques for our rent, and at supermarkets, with our home phone number considered sufficient identification. We also had to write cheques for utility bills and take them to the relevant offices.  Like the Post Office box rental ledgers, it was old-fashioned and non-technological.