Early in March I wrote a post about the first twenty books I'd finished reading in 2017.  A few days ago, I reached my 40th book, a couple ahead of schedule.

So, the next twenty books, with links to my book reviews blog for anyone who might have an interest in knowing more about what I thought about them.


Christian books
The first one I finished was a Kindle book: Beth Moore's devotional study 'To Live is Christ'. It's a series of studies on the life of the apostle Paul. I started reading this in January, and found it worked well to read a chapter (or part of a chapter) each day. 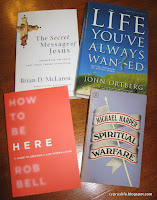 'The Secret Message of Jesus' by Brian McLaren is written in his usual thought-provoking yet very readable style. I thought it contained a lot of good sense, although I found it rather strange that he kept saying that the message of the Kingdom of God was a secret.

For contrast, I next picked up a much older book that was nestling in our bookshelves, 'Spiritual Warfare', by Michael Harper. An interesting author who was an Anglican minister but converted to Orthodoxy later in life. Terse writing on a subject that's often ignored.

Next I decided to re-read one of my favourites: 'The life you've always wanted' by John Ortberg. Very well written, with anecdotes and some humour, and also some immensely helpful points.  I should probably re-read this more often than once every ten years or so.

By this stage I'd had a birthday, when I was given several new books so I embarked on 'How to be here' by Rob Bell. His slightly odd style of writing has grown on me over the last few years, and I found this thought-provoking and encouraging. It was exactly what I needed to read.

I completed two more of these, the classic, 'Becoming a Writer', by Dorothea Brande, and Michael Legat's 'Non-fiction books'.  The latter is about 25 years old, and Dorothea Brande's book, to my surprise, over eighty years old! I bought it online, second-hand, after reading recommendations for it in several places.

Inevitably both books were very dated in the information about typing, editing, presenting documents to publishers and so on. Even 25 years ago computers in the home were rare, and email almost unknown. However, whereas the topic covered a significant part of Michael Legat's book, it was only a tiny part of Brande's, which is one of the most inspiring and helpful writing books I have ever read.

I included teenage/older children's books with the novels section in my earlier post, but this time there were three I read that were clearly intended for children.

'Linnets and Valerians' by Elizabeth Goudge is a book I liked as a child, and have read at least two or three times over the years. I last read it eighteen years ago, and spent quite a bit of time searching for my copy, in vain. Eventually I went ahead and ordered a second-hand and inexpensive paperback online, and thoroughly enjoyed re-reading it.

'The Chalet School Triplets' by Elinor M Brent-Dyer is one of the later books in the lengthy series, one which I'd almost entirely forgotten. It was about incidents in the lives of the Maynard triplets, Len, Con and Margot, and although I only have the paperback version, I don't think much has been removed.

'The Children of Primrose Lane' is by Noel Streatfeild, one of my favourite children's writers. Many of her books are about extremely talented dancers or musicians, but this one is an exciting adventure story set in the 1940s, involving six fairly ordinary children. Unfortunately no longer in print.

I read nine novels in this period - or eleven, depending on how they're counted!

'Ultimate Prizes' by Susan Howatch is the third in her thought-provoking and often shocking series about the Church of England in the mid-20th century. As with the previous time I re-read it, I hadn't recalled it with much enjoyment, yet found it unputdownable towards the end. Best read after the first two in the series.

Next I decided to read 'Don't Let me Go' by Catherine Hyde Ryan. This was a gift for my birthday a year earlier, which somehow I had not yet read - and I enjoyed it very much. All based around an eclectic mixture of people living in a block of flats, helping a neglected but very likeable ten-year-old girl.

After two novels of such high drama, pulling on the heartstrings and making me think, I decided to indulge myself in some classic Jeeves and Wooster. I hadn't read 'The Jeeves Omnibus 2' (by PG Wodehouse) for a long time. And here's where I don't know whether to count this as one or three; it's one volume, but three individual Wodehouse books: 'Right-Ho Jeeves', 'Joy in the Morning', and a collection of short stories, 'Carry On, Jeeves'. I thought it might be a bit much reading three Wodehouse books in a row, but it wasn't a problem at all. Wonderful writing, great humour, and no political correctness at all.

I try to vary the style of novel I read, so next I chose 'The Good, the Bad and the Dumped' by Jenny Colgan. I bought this a while ago at a thrift store. Colgan writes very light fiction, in the genre sometimes known as 'chick-lit', but I like her style. This one is a rather odd plot, where a newly engaged girl explores her past by visiting all her ex-boyfriends. Pleasant enough holiday reading.

Next I read 'Light a Penny Candle' by Maeve Binchy. This is one of her earlier novels, which I hadn't read since the year 2000. It's very well written, with lovely pictures painted of life growing up in rural Ireland during the second world war, contrasted, later with life for young adults in London. But the ending was, in my view, very depressing.

'Running Wild' by Victoria Clayton is another character-based novel, based in the 1960s. Most of this author's novels are out of print, and I found this second hand. It's a delightful story about a young woman running away to Dorset after deciding that she has to cancel her wedding. Beautifully written, on the whole, with the author's usual sprinkling of literary references.

I've been trying to vary the authors I read, but didn't succeed in another twenty different authors for this period. I embarked on 'Chasing Windmills' by Catherine Hyde Ryan, a recent birthday gift, having temporarily forgotten that I read another of her books only a few weeks earlier. This one is very different, featuring two lonely and stressed young people who meet by chance on the New York subway.

As a deliberate contrast, I followed this with 'Death in the Stocks' by Georgette Heyer, While I like Heyer's historical romance books best, I have enjoyed most of her mid-20th century detective ones too. This is, in my view, one of the better ones plot-wise, although her characterisation is always excellent. I did guess 'whodunit' before the end, but it wasn't obvious until quite a way through.

The last novel I read in this set of twenty books is 'A Song for Tomorrow', by Alice Peterson. This, as I discovered while reading it, is a fictionalised biography of Alice Martineau, a young woman who fought against the odds to become a singer with cystic fibrosis. Very moving in places.

Miscellaneous
And finally... I read just one 'miscellaneous' book that doesn't fit into any of the above categories. This one, 'Survival Games Personalities Play' by Eve Delunas' looks at the subconscious strategies used by people of different temperaments when stressed. It includes an overview of the Keirsey temperament system, and made very interesting reading.

Really love this blog of yours. I am keen on the Christian books too. Thanks.